Hollywood Sex Cult Connected To Clintons And The Democrats

992
0
The resident physician of the NXIVM sex cult has been charged with illegally conducting twisted human experiments.According to a New York oversight board, Dr. Brandon Porter forced Canadian actress and former NXIVM member Jennifer Kobelt to watch gang rape and dismemberment videos and recorded her reaction for a “fright study” that was allegedly conducted on over 100 other people.

“He continued to film my reaction for at least 10 minutes as I just sat there, dry heaving like I was going to puke and crying very hard,” Kobelt said in the Health Department complaint.

“He failed me, not only as a friend but as the medical practitioner I had trusted on numerous occasions with my health while I was in New York.”

Despite initially dismissing Kobelt’s claims in 2017, the Office of Professional Medical Conduct has now accused Porter of “moral unfitness, gross negligence and gross incompetence among other charges,” reported The New York Post.

He is accused of showing “human subjects an actual video of the horrific and brutal murders and dismemberment of four women by machetes; and violent film clips, including a male African American being viciously stomped by a Nazi; a conscious male being forced to eat a portion of his own brain matter; and a graphic gang rape.”

“The state also slapped him for not reporting to health officials that many of the attendees, including children, at a 2016 NXIVM event became ill with an infectious illness that produced flu-like symptoms, vomiting and diarrhea.”

NXIVM founder Keith Raniere was jailed last month and is charged with trafficking and indoctrinating women – including Hollywood actresses – into his sex cult, which included branding them with his initials, starving them, and forcing them to perform sex acts on him.

As we’ve reported, the NXIVM cult has ties to numerous wealthy liberal elites, including the Clinton campaign, the Rothschild banking dynasty, and even billionaire and Virgin Group founder Richard Branson. 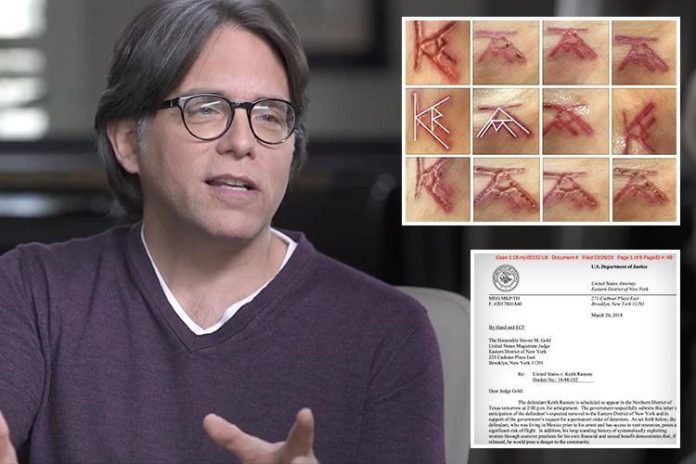