Proof That Ethical Russians Care About Real Issues; Unethical American Leaders Don’t Even Address Real Issues & The Proper Venue For Them is Prison

Comment:  America’s “leaders” are a truly disgusting bunch of sick, (sadistic even) Child Molestors.  Many of them are Pervert Trannies who molest children.  They disguise theirselves as male or female or even shemale.  America has the sickest bunch of perverts running their country that the world has ever seen.   Truly American “Leadership” is a DISGRACE.  Believe Randy’s narrative or not I have done too much research and found too much evidence so I cannot deny what Randy says.  BTW the same disgusting pervert names keep coming up involved in the same sick activities involving children…yes children.  Here is an excerpt from Randy Turner’s narratives about how his mind  was split to become a slave of America’s Pervert Leaders.

MKUltra programming Via Extreme Torture and Sexual Stimulation: This is part of the actual Programming done to Randal Turner as a teenager.

This occurred in the late 70s Jimmy Carter was president at the time.

George Bush Sr. was CIA director or running for office at the time. They came into the bedroom of the house I was staying in with Marcheline Bertrand. I had went on a white house tour about a week prior and had to defend myself from Bush Jr. for telling him to get away from some kids in our tour group that he was perving out on.

Jr had grabbed two of them and rubbed their heads against his crotch.

I told him to get away from the kids and he said Randy I like you boy as he walked walking over and placed his arm around my shoulder then he sucker punched me in the gut.

I bent down from the punch to my gut then stood up hitting him with an upper cut to the chin knocking him down.

A kid named Paul Bonacci was with Jr.

Our tour was passing through the kitchen at the time where George Jr. and Paul were getting something to eat.

Bush Jr. stood up after I punched him and said oh! Randy’s a fighter! Then he came at me and I rabbit punched him about 5

times in the face before he could throw a punch and he went down.

I grabbed the kids and told Jr to stay down or he would end up in the hospital. He stayed down till I left with the kids and we caught up to the others in our tour group. Jon Voight was part of the group ahead of me and found out what happened. He was afraid Bush Sr. who was CIA at the time would be mad at him. He invited me to the billiards room and as I opened the door I was hit in the face with a beer mug cracking one of my teeth. I got up and started going towards Jr but Voight stopped me and said it was over you got Jr. and now Jr. got you back so it ends here! Voight set the whole thing up so the little punk could get a cheap revenge shot in. which ended up cracking my front tooth at the root leaving me with a dead tooth.

Randal Turner explaining the torture and how they create one or more of his mind control alternates.

Not to be confused with Multiple personality or Dissociative Identity Disorder. Though they use techniques that have been found to be the cause of DID it is not the same.

A MKUltra must be activated via drugs and Alternates called out by a handler whereas a DID or MPD will have a multiple come out due to something traumatic occurring:

(Randal is talking about being held down and tortured by Bill Day, Photojournalist, ex-President Herbert Walker Bush and ex-President Jimmy Carter) Randal replied that all these people were a bunch of sadistic psychopathic perverts.

Comment:  These sick sadistic perverts are our presidents.  Dream on if you think they will ever represent you or even give you anything you want such as a good economy!

Randy Turner’s Account of Sexual Abuse by Bill Day, Jimmy Carter and Herbert the Pervert Walker Bush when he was around the age of 12-13.

Maybe a week After I had beat Bush Jr. up during our white house tour I am laying in bed and wake up to Bill Day walking into the room.

He sat on the bed to my left and grabbed my left arm then G.H.W Bush walks in and then {Jimmy} Carter walks in and I was thinking wtf is the president doing in my bedroom?

Carter gets on the bed and grabs my right arm and I believe they shoved these long cardboard tubes on my arms which were to make sure I wasn’t able to fight back.

Bush says I heard what u did to my boy you son of a bitch! Bush reaches down and grabs my testicles and starts crushing them.

I was begging them to kill me the pain was so bad and I must have passed out from the pain.

Bill Day was saying things into my left ear as Bush was torturing me, something about not trusting cops or authority and at some point I passed out.

I recall coming to looking down and seeing poppy sucking on my penis.

This continued for what seemed like an hour or more but during one of my court trials Bush claimed I popped within 15 minutes.

When being tortured to this extreme 15 minutes can feel like and hour.

The (popping) is what happens when the brain is unable to deal with the pain it makes a physical change and when this occurs you feel and hear a popping sound in your head.

I am no expert on how it works but I do recall some medical professional explaining it during my court trial saying the brain can physically alter itself to stop pain receptors in some people.

This popping noise is that the victims hear and feel in their head.

It is at this point the Alternates are created.

These Alternates are given names and have completely different personalities from the person being programmed.

The drug they use (Adrenochrome) allows the programmer to feed information into the subconscious and when the drug wares off the victim will have no memory of what took place or a very vague memory of something but usually will relate it to a dream or nightmare they had and not reality.

Comment: Mind Control is essentially a Satanic Rothschild/Rockefeller Zionist project and done on military bases in conjunction with the CIA primarily. The Rothschild’s consider theirselves ‘Jews’ but are the Synagogue of Satan and mind control is a Satanic project.  These Satanists destroyed the MKULTRA records just in time for a Senate Investigation as everything they do is CRIMINALLY Insane and they commit HEINOUS felonies against children.

Fritz Springmeier has heavily researched Mind Control and his pdf books are readily available for free on the internet.

Kim Nobles artwork based on Mind Control Tortures in the U.K.  Much of Mind Control Involves Extreme Sexual Abuse to Traumatise the Slave Into Being Robotically Submissive.  The Slave is then used to gratify the Pedophile Politicians Owned by the Cabal.  All are the Secret Societies of the Five Eyes:  America, Canada, U.K., Australia, and New Zealand and the Five Eyes Intelligence Services of these Countries Act as One. 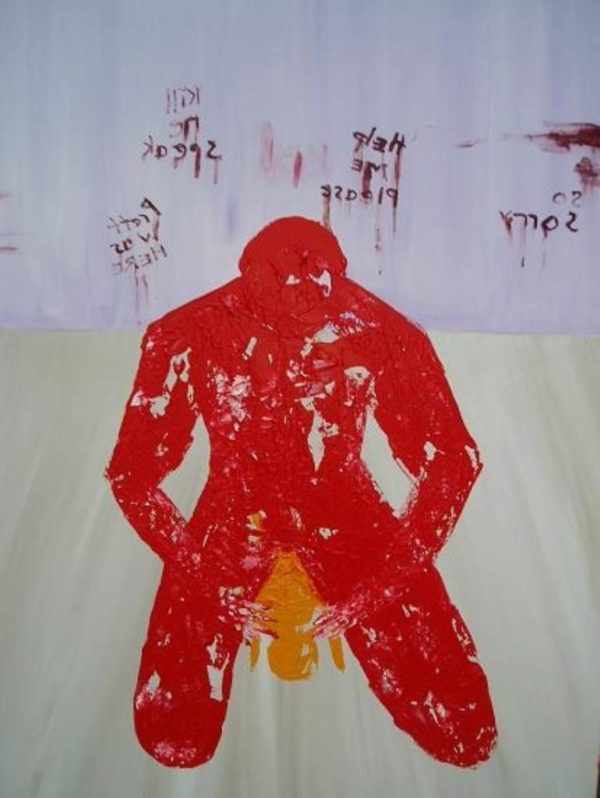 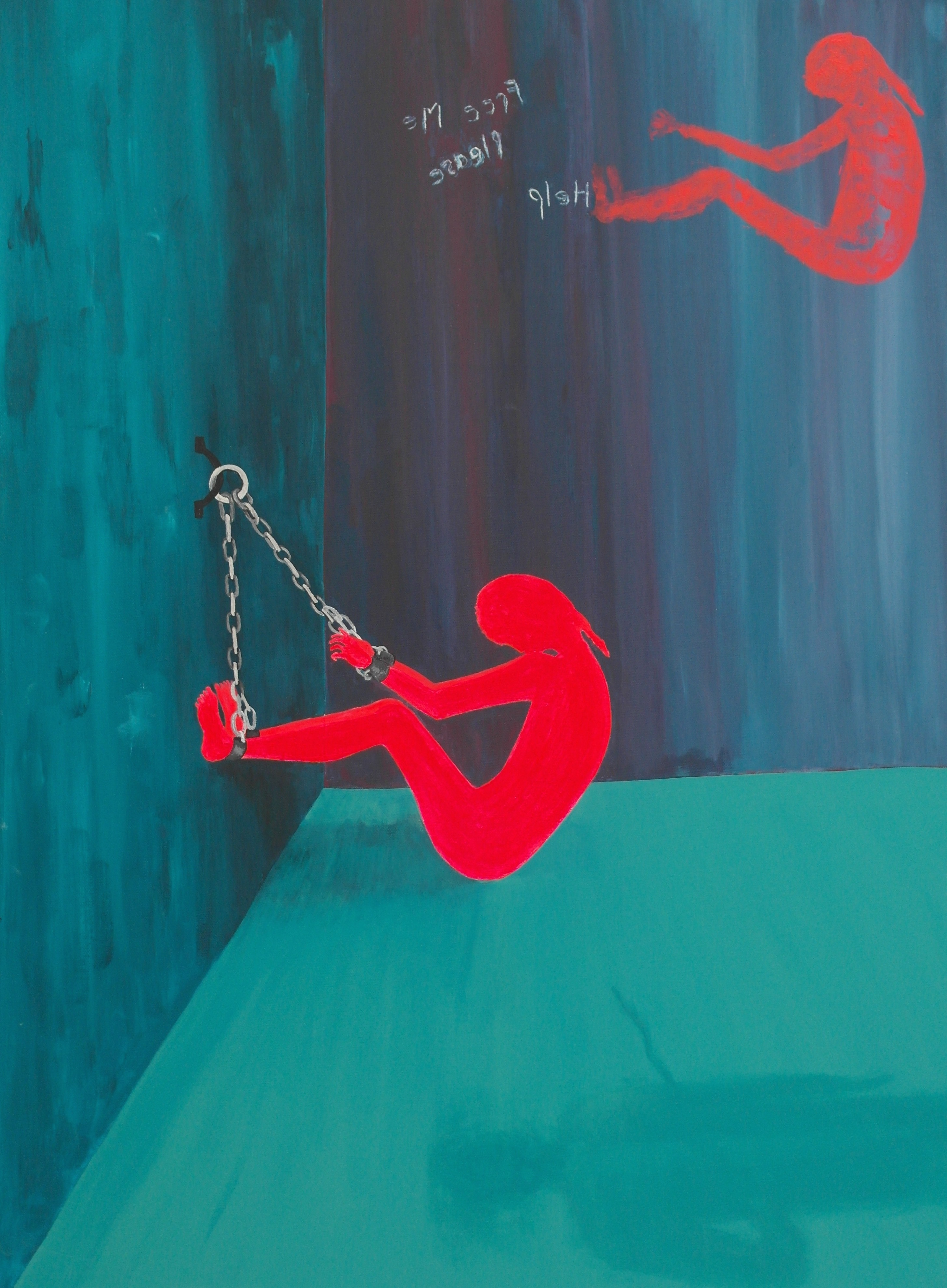 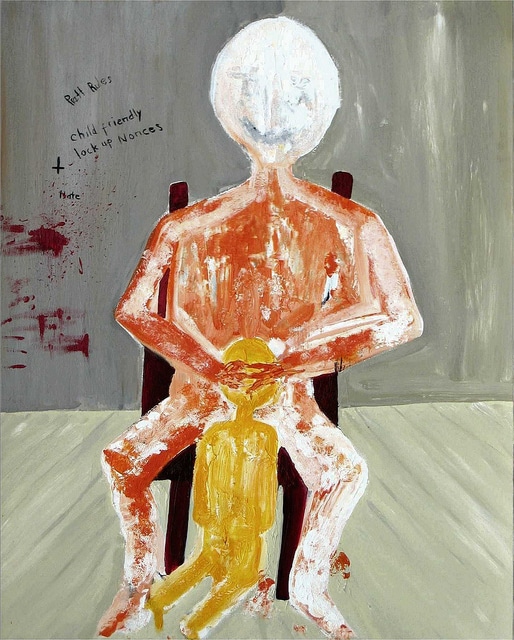 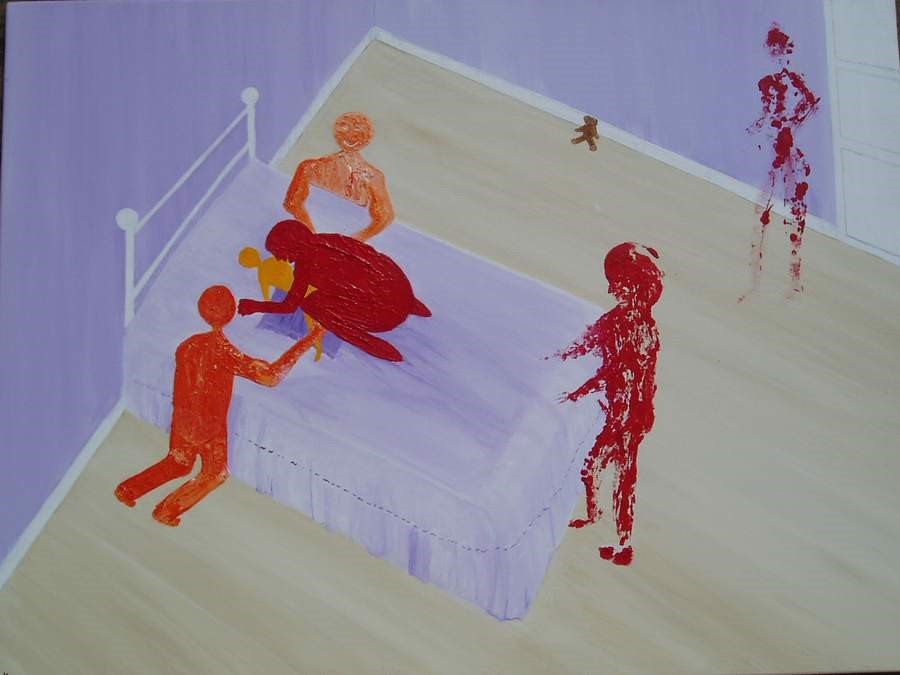 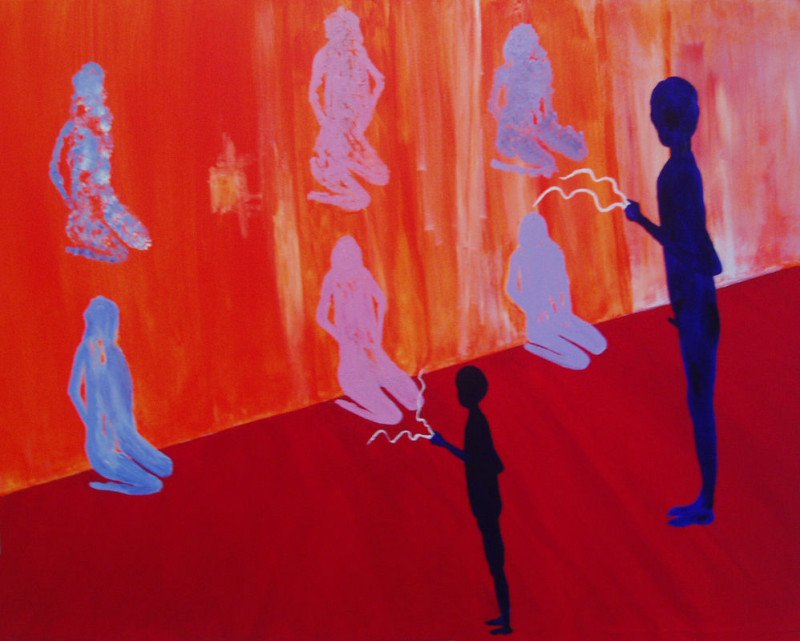 Comment:  Kim Noble’s daughter is planning on a career in law to sue the shit out of the British Perverts who did this to her mother.  Let’s hope she succeeds in bringing them all down.  The wheels of justice move slowly but they do turn. 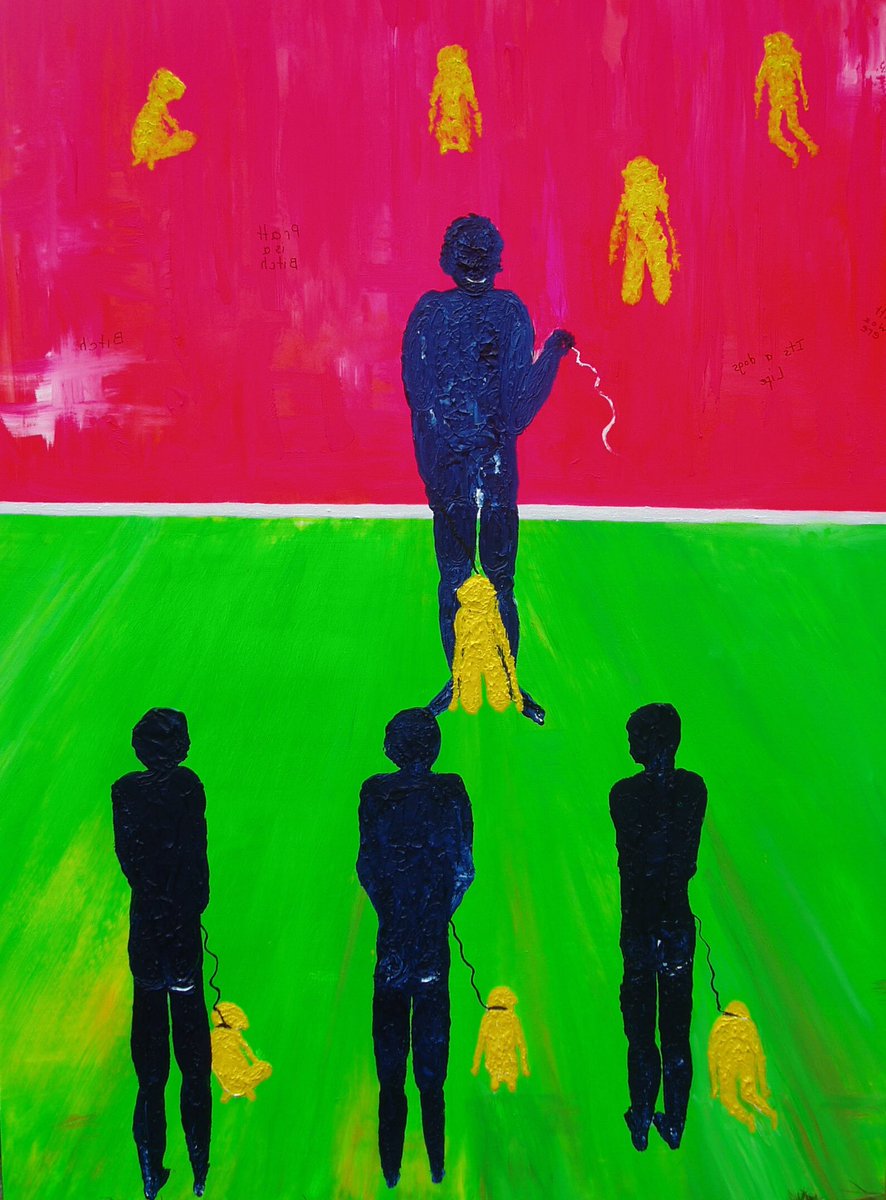 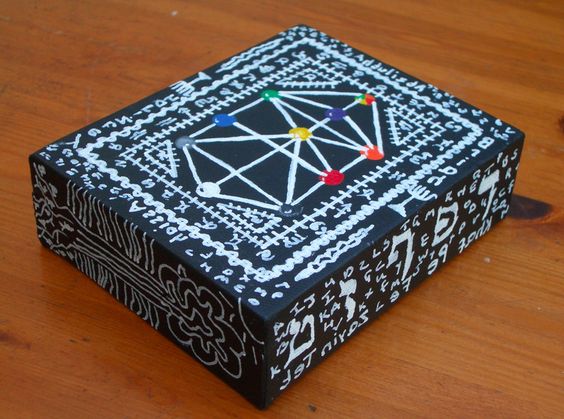 Comment:  Kim Nobles artwork shows the Jewish Kabbalah on a box as the Jewish Synagogue of Satan controls these Mind Controlled Slaves.