Click Below to download the entirety of Murder By Decree for E-reader devices such as Kindle & Kobo. 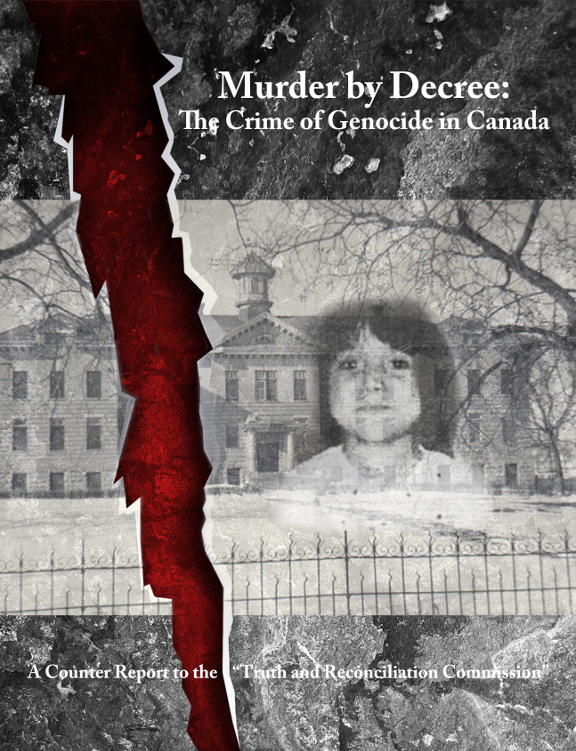 About Murder by Decree

Murder by Decree is an uncensored record of the planned extermination of indigenous children in Canada’s murderous “Indian residential schools”. It is issued as a corrective Counter Report to the miscarriage of justice by Church and State known as the “Truth and Reconciliation Commission” (TRC). Based on eyewitness testimonies and archival documentation deliberately suppressed or ignored by the TRC, Murder by Decree proves that the genocide of indigenous people began as a religion-led campaign and continues to be a deliberate governmental policy in Canada. This Counter Report reveals these startling facts: – Over half of Indian residential school children began dying the very first year these church-run facilities were opened – This huge mortality rate continued unabated for over a half century because of deliberate practices of germ warfare according to a prescribed monthly “death quota” – Evidence of these crimes and their intentional nature has been continually destroyed by the RCMP and the Catholic, Anglican and United Church since at least 1960 – The same genocide continues today, is aimed at indigenous women and children, and is driven by foreign corporate interests hungry for native lands and resources Murder by Decree is issued by The International Tribunal for the Disappeared of Canada (ITDC), an international coalition of jurists and human rights groups. The ITDC was formed in December, 2015 to investigate the disappearance of people in Canada, prosecute those responsible and prevent a further whitewash by Canada of its Crimes against Humanity. This report is an answer to these crimes and an urgent summons to the world and to all Canadians to live no longer under genocidal regimes. Published by the ITDC Central Offices in Brussels and Toronto. For more information: disappearedofcanada@gmail.com