2/3 of People of U.S. Support Torture; I Do NOT! This is a Big Part of the Hatred Towards Americans. Torture is a Crime Against Humanity.

Will the Use of Torture by US Intelligence Extend into Yemen? 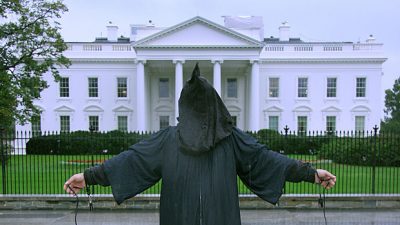 Revelations on the use of torture by US intelligence personnel during the George W Bush presidency have been described as one of the “darkest chapters” in US history.

Not only did it erode whatever moral authority the US claimed to have had during the first decade of the “War on Terror,” but the egregious mistreatment of Iraqi detainees at Abu Ghraib and Camp Bucca also helped to give birth to the self-proclaimed Islamic State and to re-energise the global jihad movement.

You’d be mistaken, however, if you believed this nefarious chapter in US history started and ended with the Bush administration – and given that the Republican-controlled Congress has voted to probe whether US troops resorted to torture as part of their interrogation of prisoners in Yemen, you can be sure there is still much to learn.

The measure, adopted on Thursday in a unanimous vote, calls on Defence Secretary James Mattisto investigate whether US military personnel or their allies were involved in torturing detainees in Yemen – no doubt a response to an Associated Press investigation, which revealed that hundreds of men detained in the hunt for al-Qaeda fighters disappeared into a secret network of prisons in southern Yemen.

Detainees described “being crammed into shipping containers smeared with faeces and blindfolded for weeks on end” and being subjected to “the grill,” in which victims were tied to a metal rod and spun above a fire, much like a spit roast.

According to the AP investigation, at least 18 clandestine lockups have been set up at a range of sites across southern Yemen by the United Arab Emirates and/or Yemeni forces, including military bases, private villas, seaports and even a nightclub. While senior US defence officials have acknowledged that American military personnel have been involved in the interrogation process at these secret prisons, they have denied participating in the torture of detainees or any knowledge of human rights abuses.

The Pentagon has now been directed by the US Congress to investigate the veracity of these denials, at the same time as these lawmakers affirmed the nomination of Gina Haspel as CIA director and Mike Pompeo as secretary of state, with the former overseeing the CIA’s torture programme under the Bush administration and the latter advocating for it. Hypocrisy, as they say, knows no bounds.

They Were ‘Grilled Alive’: US Government Exposed Running Nazi-Like Torture Program in Yemen

It’s becoming increasingly clear that the use of torture by the United States is far deeper, more widespread and more systemic than what has already been publicly acknowledged, as illustrated through the April release of published testimony and documents by the UK-based civil rights advocacy group CAGE, alleging that FBI interrogators – including Ali Soufan, a central character in the Looming Tower television series – tortured Qatari detainee Ali al-Marri (image below) on US soil.

When I interviewed Marri, he described how US interrogators tortured him using what is known as “dry-boarding,” an enhanced interrogation technique in which interrogators ram a cloth down the subject’s throat and seal the mouth shut with duct tape to simulate suffocation.

“They forced my head to look up, and when I looked up, I closed my eyes. At that moment, Ali Soufan brought the socks, put his hand on my jaw, forced me to open my mouth. He put the socks in, closed my mouth, and then Ramos [FBI interrogator] taped my mouth this way, vertically and horizontally, and then I started choking.”

“Initially, Soufan played the good cop routine with me, bringing me Arabic food and pizza, and telling me that speaking to him was the best way for me to get back to my family. But then he noticed it was not working, playing the good cop, and then he threatened to have me raped by gays in the US military, and for my wife to be raped in front of me and my children.”

Americans display a permissive attitude towards the use of torture, as evidenced by a 2016 Reuters poll that found nearly two-thirds of Americans believe the use of torture to extract information from suspected terrorists is justifiable – a number that skyrockets to 82 percent among Republican voters. Thus, it’s not unreasonable to assume that overwhelming public support for torture – underwritten by President Donald Trump‘s advocacy for it – is translating to the use of torture behind closed doors.

Others contend, however, that even if the US is carrying out interrogations in compliance with international law and human rights conventions, there is evidence to suggest it continues to outsource its dirty work to allies, much as it did in the early years after the 9/11 attacks.

“What the US has done is that they basically externalised this to surrogates, mostly the United Arab Emirates – but even the UAE has externalised this burden to local groups, so control and oversight, as well as the attribution to the US directly or indirectly, will be very difficult,” Andreas Krieg, assistant professor at King’s College London, said in an interview with Al Jazeera.

Moreover, a UN panel of experts affirmed the findings of the AP investigation, accusing the UAE – a staunch US ally – of carrying out torture, including electrocution, beatings and worse.

It will now be up to the Pentagon to determine the extent of US involvement in the use of torture in Yemen – but at the very least, it’s safe to presume we haven’t heard the last on this ugly chapter in American history.

CJ Werleman is an opinion writer for Salon, Alternet, and the author of Crucifying America and God Hates You. Hate Him Back. Follow him on Twitter: @cjwerleman

Featured image is from the author.

The original source of this article is Middle East Eye
Copyright © CJ Werleman, Middle East Eye, 2018
My Comment:  What happened to U.S. Ambassador Stephens (pictured after being raped and tortured) has been U.S. policy against others and its own prisoners in prisons.  See ‘Getting Away With Murder’ book if you don’t believe me.  America has become a narcissistic, malignant society.