NELSON MANDELA WAS A COMMUNIST TERRORIST BACKED BY ZIONISTS

Nelson Mandela the former President of South Africa has passed away at the age of 95.  The big American media outlets are currently spending hours upon hours of air time praising Mandela as some sort of angelic icon of peace.  This is a total fabrication of reality.  Mandela originally aligned himself with the African National Congress a Communist revolutionary group heavily influenced and financed by Zionist Jews.  This organization would be responsible for all sorts of atrocities in South Africa which eventually led to Mandela’s time in jail.  Mandela co-founded the militant wing of the ANC with various South African Communists including an Israeli Jew by the name of Arthur Goldreich.  The group was called Umkhonto we Sizwe or Spear of the Nation.  It is important to note that the ANC not only attacked official government buildings but even non-government targets like movie theatres as well.  It was this activity that made it easy for several countries including the United States to label the ANC as a terrorist organization.  Mandela himself was even on the U.S. terrorist watch list until 2008.  Fun facts about Mandela such as these are completely ignored by all of the big media outlets because it runs contrary to the portrait they are trying to paint. 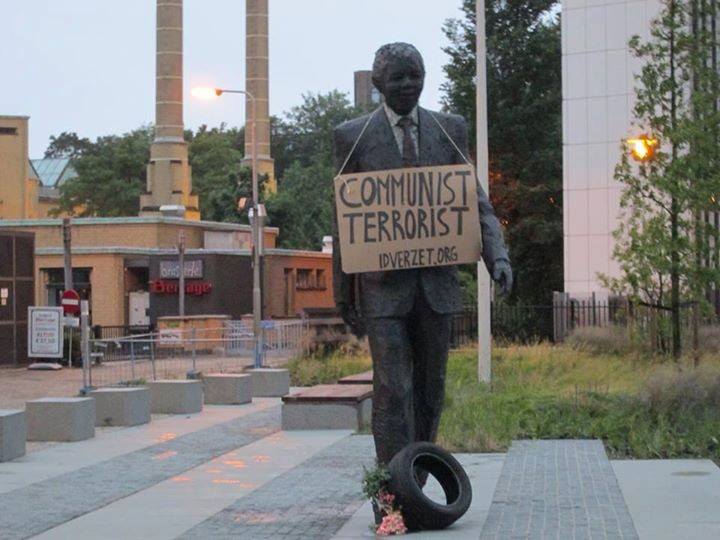 In order to understand who Mandela really was it is necessary to understand the real history of apartheid South Africa.  The policies of apartheid or racial segregation were largely implemented starting in the late 1940s to early 1950s.  These policies were originally intended to give the different races within South Africa an independent area of their own.  It was argued by South African leaders at the time that South Africa wasn’t a single nation but was made up of several different racial groups which should be split apart.  Although the merits of these policies or lack thereof could be argued, the policies were not as nefarious as we have been led to believe.

The so-called apartheid South African government which was dominated by White Europeans had made South Africa a successful independent first world nation.  This was the real reason why Jewish Communists sought to use the ANC as a way to demonize the White European leaders in power.  South Africa represented an independent economic and military power that needed to be brought under their influence.

Much like the phony civil rights movement in America, the ANC was dominated by Jewish Communists even up until the 1990s when Mandela took power.  A recent article from Haaretz notes the following.

The African National Congress, the liberation movement that became the governing party in 1994, also had a full complement of Jews, including Joe Slovo, Ronnie Kasrils and Denis Goldberg.

The ANC would not only engage in acts of terror against Whites but they would also do the same against Blacks who they suspected of collaborating with Whites.  Specifically they would execute and torture people by igniting a rubber tire filled with petrol that they forced over their chests and arms.   The practice referred to as necklacing would typically take the victim over 15 minutes to die in certain cases.  Hundreds of executions using this method were carried out by the ANC.  Even Mandela’s one-time wife Winnie would implicitly endorse this method of torture and execution.

Early in his life Mandela was surrounded by Jews and was given his first job as a clerk by a Jewish lawyer named Lazar Sidelsky.  He would associate himself with a large number of Jewish Communists including some of the ones mentioned previously.  In fact during a sweep of the ANC in the early 1960s which resulted in his arrest and lengthy prison sentence, a significant number of Jews were also arrested.  Enormous caches of weapons and explosives held by the ANC were also uncovered.  A recently published article from Tablet Magazine goes into great detail about how Mandela was aligned strongly with a significant number of Zionist and Communist Jews before and up until the time of his arrest.

In 1985, the President of South Africa Pieter W. Botha offered to release Mandela from prison if he would unconditionally reject violence as a political instrument. Mandela refused the offer.  This fact completely destroys the notion that Mandela was a man of peace.

Mandela’s release from prison in 1990 was greeted with widespread media coverage from all of the major Jewish controlled press outlets including American mainstream media.  Instead of focusing on his past, he was portrayed as a man of peace and an iconic freedom fighter.  The biased media spin was used to make people forget about who he really was.  Amazingly the ridiculous media extravaganza helped Mandela become President of South Africa allowing his Jewish backers to change South Africa into a nation run by Communist principles.

Since Mandela’s ascent to the Presidency, the South African economy has actually worsened compared to when it was led by the apartheid government.   A BBC article goes into great detail about how many things were better before the ANC and Mandela took power.  In fact economic inequality is far worse now than before.  Unemployment and poverty is rampant with many South Africans living in shacks.  Dissent against the ANC is largely stifled as one would expect in a nation run by Communist principles.  There has also been a substantial increase in the number of White South Africans murdered by Blacks since this transformation.  Specifically White South African farmers have been primary targets during this reign of murder and terror.

Simply put, Mandela was nothing more than a cult of personality fraud who has brought ruin to South Africa.  Many Black South Africans are actually worse off now than under the alleged evils of the apartheid government.  He was always a puppet for powerful Jewish interests who were the ones that really helped him gain power in South Africa.  It is no wonder why Barack Obama had so many kind things to say about Mandela because Obama is literally doing the same thing to America that Mandela did to South Africa.  Mandela should be remembered with disdain and not with reverence.