After years of alleged bullying, an Ohio teen killed herself. Is her school district responsible?

Growing up, Emilie Olsen had an infectious smile, a love for horses and a perfect attendance record. She was a straight-A student and an excellent volleyball player. Emilie “had an extremely sweet spirit about her,” a family friend recalled.

It was a tragedy that sent a jolt through Fairfield, Ohio, where Emilie had lived since her parents, Marc and Cindy Olsen, adopted her from China when she was 9 months old. Classmates and neighbors mourned a young life cut short.

But in the days following Emilie’s death, her parents spoke out against the seeming suddenness of it all. Emilie’s death was precipitated by cruel, relentless bullying, the Olsens said. Worse: It could have been prevented, they claimed, if officials at Fairfield Intermediate and Middle School had been more responsive. Emilie did not have to die, they said.

These were the allegations made in an 82-page federal lawsuit the Olsens filed against Fairfield City School District, various administrators and Emilie’s alleged bullies last December. Since then, their fight to hold the school district accountable for their daughter’s death has been met with support from parents and denials from school officials.

“Investors should focus not just on what companies stand to save from tax reform but how they plan to use that windfall.”

Former Fairfield City Schools superintendent Paul Otten, who is among the defendants named in the complaint, left his position last month to become the superintendent of the nearby Beavercreek City School District.

[How to talk to your teen about depression and suicide]

Neither administrator gave specific explanations for leaving. In response to the lawsuit’s December filing, the school district said in a statement, according to WCPO: “The District will be defending the litigation and will be providing appropriate responses in the course of the litigation. The District has no further comment at this time regarding this pending matter.”

Meanwhile, the lawsuit alleges that Emilie suffered discrimination because of her race and perceived sexual orientation and that school officials were negligent in their handling of her bullying. The complaint details a downward spiral brought on by unabating abuse.

It started in the fifth grade, according to the complaint, when Emilie took to wearing camouflage-patterned clothing and cowboy boots. Her style allegedly prompted jeers from classmates, who called her “fake country” — because “Chinese people don’t wear camo.”

Things got worse when Emilie entered the sixth grade, the complaint said. She allegedly became the target of mean-spirited social media messages, as well as a fake Instagram account called “Emilie Olsen is Gay.” One classmate allegedly followed Emilie into the bathroom, handed her a razor and instructed her to “end her life.”

In the gym one day, Emilie and another female student got into a scuffle over the fake accounts, and the student allegedly pushed Emilie and slapped her in the face. A teacher allegedly witnessed and broke up the fight but took no action other than to direct the students “back to class.”

“I have a bad feeling that if nothing is done then this has the possibility to escalate into something worse,” Marc Olsen wrote in an email to the school’s assistant principals after learning of the fight from the father of a student who saw it happen. He then received a phone call from one of the principals, who allegedly said they were “going to take care of the situation.”

According to the lawsuit, no students were ultimately disciplined for the fight or the Instagram accounts. Otten, the former superintendent, told WCPO last May that he didn’t know about the online bullying.

“You’re assuming that when we get something (from parents) we start researching kids’ Instagram accounts and printing stuff off,” he said. “I wasn’t aware of it.”

Otten added that he has four kids enrolled in the school district. “I can assure you,” he told WCPO, “… there is nothing for me to gain by hiding anything.”

The bullying only intensified in seventh grade, the complaint said, when Emilie was placed in the same learning group as several girls who had allegedly harassed her the year before. By then, Emilie had started to inflict self-harm and express suicidal and depressive thoughts.

When the Olsens brought these circumstances to the principals’ attention, they were allegedly told that Emilie “needed to buckle down” and cope even though she told an administrator she was “frightened to return to school.”

While the cyber-bullying continued, physical messages allegedly started to appear on the stalls and walls of the school’s bathrooms. These scrawled scripts singled Emilie out by name — “Go kill yourself Emilie” — and made reference to Emilie’s race and perceived sexual orientation. According to the complaint, while the messages were in “easily observable” locations and “could not have been missed by anyone using the restrooms, including the school administrators” and teachers, the staff failed to remove them in a timely manner.

In October 2014, a group of Emilie’s friends defended her against her bullies in the cafeteria, initiating a verbal dispute as her friends yelled at the bullies to stop “messing” with Emilie. (The students’ incident reports were obtained by WCPO.)

At a previously scheduled meeting with the assistant principals the next day, Olsen was not told about the fight involving his daughter, the complaint alleges. In the following days, Emilie started vomiting and feeling unwell. When Olsen informed the school that she would be absent because she was feeling sick, he was allegedly still not told about the fight.

Through all of this, Emilie was becoming increasingly withdrawn, barely recognizable from her old self, the complaint says. She seemed to take little interest in her schoolwork, and her grades dropped dramatically. On a personality quiz that Emilie was required to take for class, she described her “bad day symptoms” as “crying, depressing, yelling and screaming, passive resistance, and going into a trance,” the complaint says.

Her Internet search history showed attempts to get help, followed by growing despair, her parents say in their lawsuit.

Emilie asked strangers online whether they had ever been bullied and viewed articles about celebrities who were bullied in school. She visited a website with the line “I’m just a kid and my life is a nightmare,” and a picture of a young woman’s slashed forearm, with the caption “I’m not strong anymore.”

At a school where Asian Americans were allegedly labeled “too smart” and mocked for their “slanted eyes,” Emilie seemed to feel alienated, the complaint says.

She sought permission to dye her hair to “look more like a white person.” Her parents allege that she asked her father, “Why can’t I be white like you and mom?”

Marc Olsen later told police that Emilie had been suffering from depression and had a history of cutting herself, the Butler County Journal-News reported.

“I[‘m] causing all this trouble on earth,” Emilie wrote to a friend on Facebook on Dec. 1, 2014, the complaint says. “It hurts when you have to explain yourself to people you don’t know or like. You feel them judging you, staring at you, talking about you, and I’ve made up my mind, I wanna die.”

She went on: “Even if there [sic] adults they hate me. I can’t please anyone with anything I do. Not even my teachers.”

Less than two weeks later, Emilie killed herself with her father’s gun. 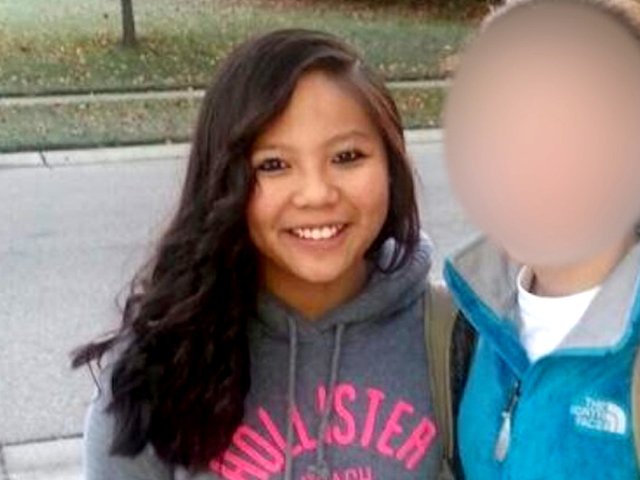 Jury trial for Emilie Olsen case may not happen until 2018 – if the case isn’t settled first http://bit.ly/1pYoMkF

Five days after the suicide, the Olsens were in the throes of grief when they allegedly received a visit from Principal Butts and a group of police officers. According to the lawsuit, the officers coerced the Olsens to let them inside their home, then told Marc Olsen that he was “stirring the pot” and “entertaining rumors” by talking to the media about Emilie’s death.

At that point, Olsen had already told the Journal-News that he thought bullying killed Emilie.

Later that month, Otten sent a letter to parents across the district addressing “the many rumors and false reports which have surfaced” about Emilie’s passing.

“The Fairfield Township Police Department conducted a thorough investigation and did not find any credible evidence that bullying was a factor in this tragedy,” the letter said. “It seems there is an unjustified need to place blame for this horrendous event. I want you to know we all mourn the loss of Emilie. … However, the rumors and misinformation regarding this event which are being conveyed by social and other media are negatively affecting our community, our schools and our staff.”

A police report obtained by the Cincinnati Enquirer showed that authorities spoke to Emilie’s boyfriend and best friend after her death. Neither mentioned bullying.

School officials have acknowledged communication with the Olsens about the bullying but said the issues were resolved “to the complete satisfaction of the family.”

A jury trial for the suit is slated to take place in 2018.

Under Ohio law, bullying and cyberbullying are prohibited in schools. But families seeking redress face an uphill battle, the Journal-News reported, because they must prove that schools were aware of and deliberately indifferent to threats of harm.

“Maybe most importantly, did the school district know about [the bullying] and did they, as the plaintiffs allege here, literally put her back into classes with the bullies that they’d reported about?” said ABC News legal analyst Dan Abrams. “Now the superintendent actually wrote a letter to the school community saying that he didn’t think bullying had to do with this, so there’s going to be clear factual disputes.”

A response filed by the defendants in April argues that the lawsuit’s claims are invalid because school officials are not liable for violations of the anti-bullying statute. It further alleges that the school district (as opposed to the school board, which is also named) is not a valid party to the lawsuit because it is “merely a geographical area.”

The Olsens’ lawsuit cites other alleged incidents of bullying at Fairfield City Schools, noting that their daughter’s case “was not an outlier.”

“I’m speaking up for [Emilie] because she can’t do that now,” Marc Olsen told the Journal-News shortly after her death. “She’s over in a funeral home in downtown Hamilton. I need to do this. This is my job. I’m not going to fail her again.”

This post has been updated to clarify that the gun Emilie used belonged to her father.

Read more:
The CDC is investigation why so many students in wealthy Palo Alto, Calif. commit suicide