After the Invasion of Iraq: Anglo-American Oil Giants Looting

Fifteen Years After the Invasion of Iraq: The Anglo-American Oil Giants Start to Flaunt the Spoils of Imperial Conquest 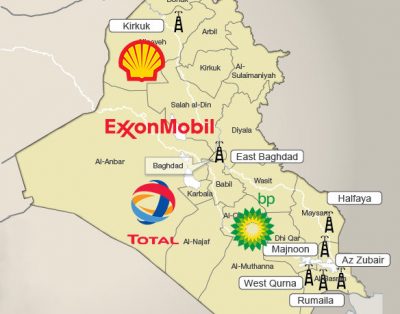 After 15 years of repudiating claims that the invasion of Iraq was only initiated to seize Iraqi resources, large oil corporations fronted by former architects of the war who vacated to the private sector are flagrantly advertising their contracts for exploration and production of Iraqi oil fields to potential investors.

The British oil and gas company BP won the contract to operate the Rumaila Oil Field back in 2009, and now proudly boast of its new drilling capabilities on Twitter. Rumaila is simply huge; by some measures it is the third largest reserve of crude oil on the planet, and is currently extracting 100 million dollars worth of oil every day – enough to cover the annual health budget of Iraq under the wartime rule of the US coalition every five days.

One of the board members of BP at present is Sir John Sawers, the former Chief of MI6 from 2009 to 2014 who acted as UK special representative to Iraq during the occupation. He cashed in a few favours and joined BP as an Independent Non-Executive Director in 2015, one year after he departed MI6 and two years after BP had been handed a licence to exploit one of the most valuable pools of liquid gold on the planet. There was seemingly no regulatory oversight of this very British oligarchy.

In March 2003, just before Britain went to war, BP denounced reports that it had held talks with Downing Street about Iraqi oil as “highly inaccurate” and denied that it had any “strategic interest” in Iraq, while Tony Blair described “the oil conspiracy theory” as “the most absurd”.

However, memos disclosed by The Independent in 2011 tell a very different story. In a series of meetings in 2003, BP revealed that they had approached Labour Peer Lady Symons to lobby the Blair government into demanding a share of spoils from the Iraq War in return for UK military support.

Minutes of a meeting with BP, Shell and BG (formerly British Gas) on 31 October 2002 read:

“Baroness Symons agreed that it would be difficult to justify British companies losing out in Iraq in that way if the UK had itself been a conspicuous supporter of the US government throughout the crisis.”

The minister then promised to “report back to the companies before Christmas” on her lobbying efforts.

The Foreign Office also invited BP in on 6 November 2002 to talk about opportunities in Iraq “post regime change”. Its minutes state:

“Iraq is the big oil prospect. BP is desperate to get in there and anxious that political deals should not deny them the opportunity.”

Not for the first time in their history (see the 1953 Iranian coup d’etat) BP succeeded in convincing the UK government to forcibly seize the resources of a sovereign foreign nation to bolster the share prices of large corporations like themselves. Cronies who endlessly spin around the revolving door between military/government positions like Sir John Sawers no doubt made a fair few quid in dividends and obscene salaries; in fact, Sawers is now a regular feature at Bilderberg conferences, rubbing shoulders with Hillary Clinton and George Bush. I imagine they got on famously.

The only cost was more than 100,000 Iraqi civilian lives.

At least now we can say conclusively that, yes, the Iraq War was about oil.

All images in this article are from the author.