What District of Columbia Supports: Killing of Civilians (by Zionist Occupied Government) 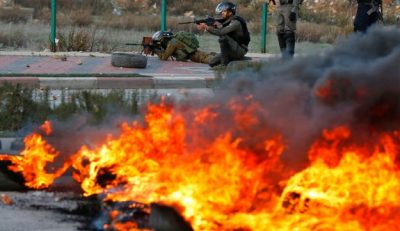 On Thursday, armed only with stones and their indomitable spirit against longstanding injustice, ignited by Trump’s pronouncement for Israel, its soldiers and police used water cannons, toxic tear gas, rubber-coated steel bullets, stun grenades, and live fire against them across the West Bank.

In response to a rocket from Gaza landing harmlessly in an open field, an Israel tank shelled the Strip. IDF warplanes terror-bombed Hamas targets, its government having nothing to do with the incident.

Scores of Palestinians were injured, at least nine from live fire, some hospitalized with serious wounds. Things are likely to be worse after Friday prayers, tens of thousands of Palestinians expected to protest.

“…Jerusalem’s legal status (is) codified (under) international law according to (UN) resolutions, (an) International Court of Justice (ruling), and…154 (nations) vot(ing) in favor of recognizing the state of Palestine on the territory occupied in 1967, including Jerusalem.”

The PCHR called Trump’s move “a new Balfour Declaration,” 100 years after the first one by Britain, this one by America – both actions that will live in infamy.

The legal Palestinian right to East Jerusalem as its legitimate capital cannot be changed by Trump, Netanyahu or anyone else. Declaring it otherwise is a criminal act, flagrantly violating international law, including UN resolutions and Geneva Conventions.

Trump’s “decision is an explicit call for imposing the rule of jungle and de facto policy in addition to completely flouting the international law and UN’s role.”

“This declaration also gives political legitimacy for the Israeli crimes and affects the history, present and future of the Palestinian people.”

Four demand Israel withdraw entirely from territory it illegally occupied in 1967, including Jerusalem – calling changes to the status of city invalid.

It recognized no territorial changes “to the 4 June 1967 lines, including with regard to Jerusalem, other than those agreed by the parties through negotiations.”

It “(c)all(ed) upon all States, to distinguish, in their relevant dealings, between the territory of the State of Israel and the territories occupied since 1967.”

It “(c)all(ed) for immediate steps to prevent all acts of violence against civilians, including acts of terror, as well as all acts of provocation and destruction, calls for accountability in this regard…”

Like dozens of other UN resolutions hostile to its interests, Israel ignored Res. 2334, continuing to do as it pleases, the Trump administration fully supportive, the world community taking no effective actions for its crimes against Palestinians and neighboring states

Trump’s declaration for Israel is the latest affront to their fundamental rights and dignity – stripping off the mask of America as a fair mediator on anything, exposing the peace process hoax.

On Thursday evening, Trump’s team and guests were drinking champagne at the White House – celebrating their betrayal of the Palestinian people at a Hanukkah reception, the president saying:

“…I know for a fact there are a lot of happy people in this room.”

Palestinians and the Arab street condemn his action. So do fair-minded Jews – in America and elsewhere, including in Israel.

Franklin Roosevelt called December 7 “a date which will live in infamy” – for a second reason following Trump’s Thursday pronouncement for Israel.

Stephen Lendman is a Research Associate of the CRG, Correspondent of Global Research based in Chicago.

My newest book as editor and contributor is titled “Flashpoint in Ukraine: How the US Drive for Hegemony Risks WW III.”

Featured image is from Haaretz.