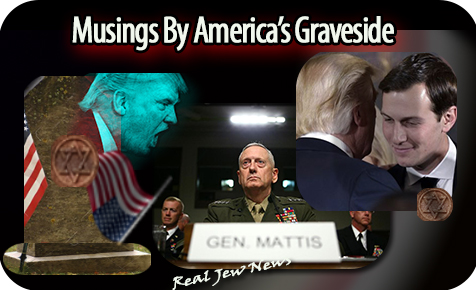 * Haley is an imbecile.
* Trump can’t be trusted, his word is full of worms.
* Trump is a tinderbox, a dangerous demagogue.
* There hasn’t an ounce of integrity running through Trump’s veins.
* Jared Kushner has his day in the sun with Trump. But every dog has his day and pisses on the hydrant. America is that hydrant.
* Bannon wrote many of Trump’s campaign ‘anti-NWO’ speeches. Trump never believed a word of it.
* Kushner pushed Bannon out of National Security. The Zio-Globalists are in, the Gentile nationalists are out.
* Tillerson is a weakling. He caved to big biz to allow homos to wreck the last remaining wholesome institution in America, the Boy Scouts of America.
* Mattis and McMasters are war criminals and run the Jew-enabled war machine wreaking havoc all over the world.
* Mattis has the eyes of a zombie. He’s a metaphor of the hollowing out of Jewmerica, a country with one foot and three toes in the grave.
* Kushner, Mattis, McMaster, and their shill, Donald Trump, could very well bring us to the brink of WW 3.
* Jewmerica is the most hated country in the world.
* Jewmerica is a sociopath on Prozac and uppers and downers. The world is reeling from it.
* Europe is owned by Jewry’s global army: Nato.
* Look for a ‘false-flag’ by IsraHell in the Golan Heights. Trump will buy and sell the LIE.
* Haley is a metaphor for American leadership: Incompetence coupled with inanity.
* Jewmerica is bereft of true statesmen. All that’s left are shills for the wicked, neurotic, blood-thirsty Jews.

Woe to the country that has Jews ruling it! Your pillars of integrity will crumble; your sons and daughters will die of wasting from within!