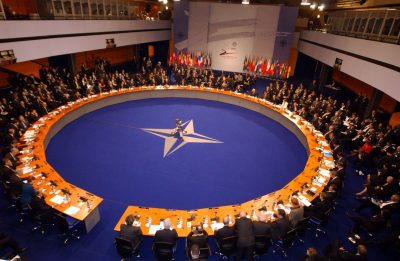 This is the pattern that has been used ever since the Soviet Union ended in 1991 when the ‘anti-communist’ excuse for America’s post-WW-II global imperialism has no longer been available to use (such as had earlier been the case in Korea, and in Vietnam, and in Guatemala, and in Iran, and in Chile and so many other lands), prior to 1991. However, the pattern for this subversion and ultimate conquest was created back in 1965 in Indonesia (if not earlier, in other “banana republics”); and, so, we shall start here by describing that landmark earlier case, in Indonesia, which set the pattern that now is routine for the U.S. Government to use post-1991:

The October 1965 through March 1966 Indonesian government extermination of anywhere from 500,000 to two million Indonesian supporters of communism and of any other left-wing political party — including supporters of Indonesia’s leader, General Sukarno, who had some leftist supporters — was probably masterminded, ordered, by U.S. President Lyndon Johnson, on behalf of the owners of the mega-corporations who were backing the Democratic Party. Certainly, LBJ was behind this ‘ethnic cleansing’, even well before it began.

As early as March 1965, Johnson’s people were privately vitriolic against Sukarno, who was making noises about land-reform and possibly nationalizing natural resources. For example, on 18 March 1965, “118. Memorandum From the Under Secretary of State (Ball) to President Johnson” opened:

“Our relations with Indonesia are on the verge of falling apart. Sukarno is turning more and more toward the Communist PKI.

The Army, which has been the traditional countervailing force, has its own problems of internal cohesion. Within the past few days the situation has grown increasingly more ominous. Not only has the management of the American rubber plants been taken over, but there are dangers of an imminent seizure of the American oil companies.”

The coup started on 1 October 1965; General Suharto was installed to replace Sukarno, and promptly began the extermination-campaign. But he didn’t know whom to slaughter; so, as one excellent review of Vincent Bevins’s excellent book about the slaughters, The Jakarta Method: Washington’s Anticommunist Crusade and the Mass Murder Program that Shaped Our World, succinctly put the matter,

“The US provided arms, training, communication equipment and lists of thousands of real and alleged leftists to be killed. US-owned plantations furnished lists of ‘troublesome’ employees. US officials repeatedly sent cables to the leader of the butchery, General Suharto, to kill the leftists faster.”

Other fine reviews of this book are here and here. However, like the other books that have been published about that extermination-campaign, Bevins’s focus isn’t on the masterminds who planned and bribed to get it done (its beneficiaries), but instead on the physical perpetrators and their victims. The coup-and-extermination’s ultimate beneficiaries aren’t named, nor identified. The U.S. did that in conjunction with other members of the American gang, mainly in Europe. The Judge in the International People’s Tribunal stated that “the United States of America, the United Kingdom and Australia were all complicit to differing degrees in the commission of these crimes against humanity.” It was a Rhodesist operation, done for the U.S.-and-allied (especially Netherlands) aristocracies.

Now, in the post-Soviet era, Ukraine and the U.S. Government’s aim to get its nuclear-warheaded missiles into that closest nation of all to Moscow (just 300 miles away), by admitting Ukraine into NATO, here is the sequence of events:

Ukrainians predominantly saw NATO as an enemy, not a friend. But after Obama’s February 2014 coup in Ukraine, “Ukraine’s NATO membership would get 53.4% of the votes, one third of Ukrainians (33.6%) would oppose it.”

However, afterward, the support averaged around 45% — still over twice as high as had been the case prior to the coup. Ukrainians became switched regarding that matter, favoring NATO instead of opposing it, because the billionaires who fund the winning political candidates and who control the media in the U.S. and in Ukraine had propagandized there heavily after the coup, and those governments and media have been portraying Russia as being Ukraine’s enemy, and America and the EU and NATO (which, prior to the coup, were viewed by Ukrainians as being their enemy) as being instead Ukraine’s friends. So: Ukrainians, after the U.S. coup, wanted to join the EU, and to join NATO.

Immediately after Obama’s coup that grabbed Ukraine, his installed new government there promptly began its ethnic-cleansing so as to get rid of enough millions of Ukrainians who had voted for the neutralist (neither pro-American nor pro-Russian) Ukrainian President whom Obama had overthrown, in order to enable the new, pro-U.S.-Government regime in Ukraine to be able to continue on through ‘democratic’ elections in which all candidates would be anti-Russian. And that has brought us to today in Ukraine.

What that showed was the extreme effectiveness of the regime’s propaganda after the coup had been prepared and had used the media during 2014, and even more so after the coup was perpetrated and the U.S.-junta regime and its controlled ’news’-media drenched the public with anti-Russian propaganda after the coup, so that that nation, which only a year or two after its public had viewed NATO as being their enemy, prior to 2013, switched to instead viewing NATO as their craved-for protector, against what most Ukrainians, only a year or two before, had been viewing to be their protector. (Of course, after Russia ultimately responded to America’s grab of Ukraine and invaded Ukraine in 2022, vast majorities of Ukrainians now view the invading country, Russia, as being their enemy.)

Key here is the fact that by taking over a country — first by subverson (which in the case of Ukraine was being called “The Orange Revolution” and installed the pro-U.S. Ukrainian President Viktor Yushchenko into power in 2004) — and later by means of an outright coup to finish the job; public opinion can thus be effectively turned upside-down.

The political analyst Walter Lippmann in 1922 introduced the phrase “the manufacture of consent” as referring to how an aristocracy in the modern age controls its public by means of those aristocrats (now a country’s billionaires) owning, founding, and hiring media and think tanks and universities in order for these billionaires, in this age of hired ‘experts’ about public affairs, to shape their public’s opinion to become what that aristocracy (the nation’s billionaires) wants it to become. What happened in Ukraine is an excellent example of this pattern.

Another example of this, which is now in the cooker and just being prepared, is Moldova. On 6 December 2022, Russia’s Tass News Agency headlined “Majority of Moldovans consider Russia country’s best partner — opinion poll”, and reported that the Institute of Marketing and Polls in Moldova (a polling organization that mainly serves not news-outlets but corporations that market to Moldovans and which therefore need to know privately what Moldovans want) had privately reported the prior day their findings about Moldovans’ views regarding the country’s international relations. Tass reported that:

Most Moldovans consider Russia to be their country’s best partner in the spheres of economy, politics and security, according to the results of a public opinion poll released by the Institute of Marketing and Polls (IMAS) on Tuesday.

“As many as 38% of those polled spoke in favor of partnership with Russia in the economic sphere, 30% opted for the European Union, and 12% – for Romania. Only four percent chose partnership with the United States, and two percent favored China and NATO each. In the sphere of politics, Russia was chosen by 37% of the respondents, the European Union – by 29%, Romania – by 11%, the United States – by 5%, China – by 1%, and NATO – by 3%. In the sphere of security, 36% of the polled said they considered Russia a reliable partner. The European Union scored 21%, Romania and NATO – 10% each, the United States – 5%, and China – 1%,” the pollster said.

The poll involving 1,100 people in 90 settlements was conducted from November 10 to 29. The margin of error is three percent.

On 21 January 2023, Russia’s RT News bannered “Moldova considers joining ‘larger alliance’: Under President Maia Sandu, the country has pursued deeper integration with the West”. Sandu is to Moldova what President Viktor Yushchenko was to Ukraine — a key agent of U.S. subversion of her country, to serve her U.S. masters. She was referring to either the EU or NATO, but didn’t name either of them, because both are unpopular in Moldova, just as both had been unpopular in Ukraine before America’s successful coup in Ukraine in 2014.

If she succeeds, then she won’t likely be the leader of her country when the U.S. coup occurs there, but her leadership of Moldova will have helped to lead her country to the coup, and to the ethnic cleansing, and to the popularity there of the EU and of NATO, and, perhaps, also to becoming invaded by Russia before Moldova will have applied to and been accepted into those anti-Russia economic and military organizations. Just as Yushchenko was a crucial steppingstone to Ukraine’s post-2013 destruction, she will then be a crucial steppingstone to Moldova’s destruction.

The public can be manipulated, and this can produce a country’s ultimate destruction, by means of not merely deceit, but, also, by subversion, followed by coup, followed by ethnic cleansing, followed by military invasion of that country.

No public learns from history. That might be the reason why history constantly repeats itself, as it has done for all of these thousands of years, though the methods change. Understanding history’s patterns ought to be taught in pre-college grades, but aristocracies have never wanted it to be publicly taught at all; and, so, even at the Ph.D. level, it’s more of an orphan topic than any kind of academic mainstream.

This article was originally published on The Duran.

Investigative historian Eric Zuesse’s new book, AMERICA’S EMPIRE OF EVIL: Hitler’s Posthumous Victory, and Why the Social Sciences Need to Change, is about how America took over the world after World War II in order to enslave it to U.S.-and-allied billionaires. Their cartels extract the world’s wealth by control of not only their ‘news’ media but the social ‘sciences’ — duping the public.

He is a regular contributor to Global Research.