We Have a Report of the CIA Warning Germany of a Possible attack on the pipeline prior to this incident. 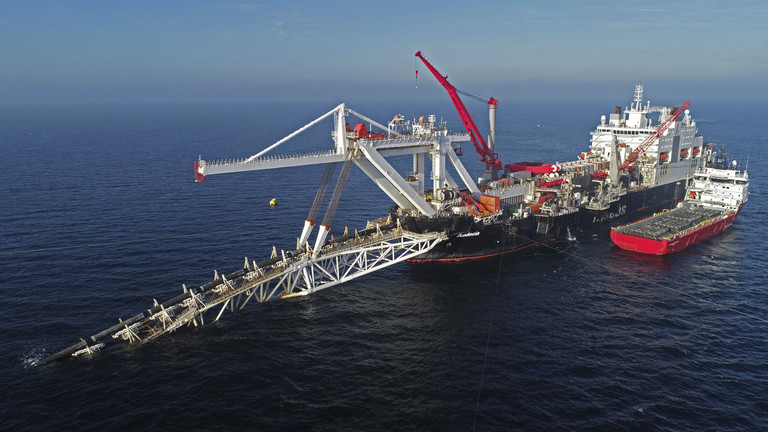 This man is a moron for thinking that what happened to the pipeline is a good thing.

Now Europe is doomed to have high energy prices for a very long time. This does not hurt Russia at all. They don’t need Europe as a customer.

There’s also this old clip of Brandon floating around talking about how they could bring an end to the Nord Stream pipelines if they chose to do so.

On top of that, we have a report of the CIA warning Germany of a possible attack on the pipeline prior to this incident.

They probably warned Germany so they could later deny that they had anything to do with sabotaging the pipeline.

All this news makes it even more likely that the Jews who control the United States ordered the pipelines sabotaged. There is no logical reason why Russia would sabotage infrastructure that generated revenue for them. 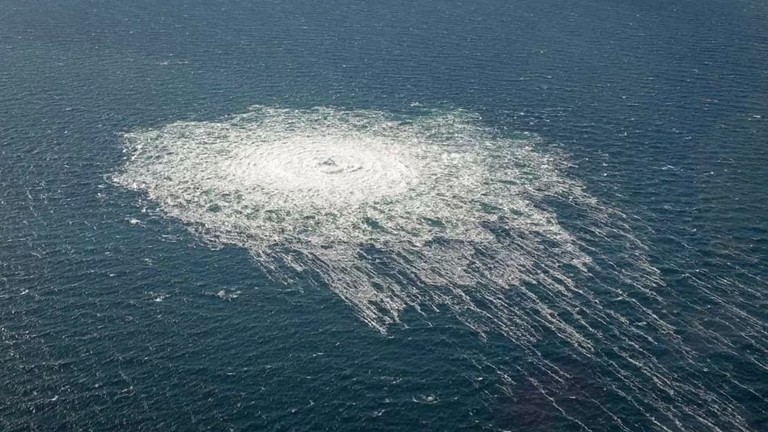 The head of the European Union Ursula von der Leyen has warned of the “strongest response” as a result of the Nord Stream pipeline sabotage.

But just who is this “strongest response” going to be directed to?

The most likely culprit is the United States and all the Jewish interests surrounding them. So is Ursula implying that they’ll go after the US and the Jews? Seems doubtful.

Probably what will happen is that they will blame Russia for this incident even though there is zero reason for them to sabotage their own revenue generating mechanism. The EU has shown itself to be nothing but a puppet organization of the US and Jewish globalists so that’s why this is the most likely response. Who knows though, maybe they’ll surprise me and not blame Russia, but I doubt it.

(Natural News) The demolition of the Nord Stream 1 and 2 pipelines in the Baltic Sea is one of the most outrageous and evil acts of terrorism and sabotage in the history of our world. Now that the sabotage has been confirmed by numerous nations, the blame game has begun as everyone is wondering, “Who did it?”

Resident Joe Biden, Russophobic State Department official Victoria Nuland and GOP Senator Ron Johnson are all on the record demanding the Nord Stream pipelines be taken out, implying they will use any means necessary to achieve that outcome.

Watch from 2:52 in the following exchange between Sen. Ron Johnson and Victoria Nuland, a known Russia hater and key architect of the corrupt Zelensky regime that openly cooperates with actual Nazis while stealing billions of dollars from US taxpayers:

Sen. Ron Johnson: “I can’t think of a more powerful way to punish Russian aggression than by rolling back what progress has been made, and if at all possible , prevent the Nord Stream 2 from ever being completed.”

Sen. Johnson: “…Taking action that will prevent it from EVER becoming operational.”

Nuland: “…Our expectation is that the pipeline will be suspended.”

Johnson: “I certainly hope that the Senate Foreign Relations committee would take up legislation that would go beyond just suspending it but ending it permanently.”

On February 7th of this year, Joe Biden offered a thinly-veiled threat to annihilate the Nord Stream pipeline in his usual thuggery-smuggery style that we all get to witness when he’s pretending to be a tough guy:

Joe Biden: “If Russia invades… then there will be no longer a Nord Stream 2. We will bring an end to it.”

Reporter: “But how will you do that, exactly, since…the project is in Germany’s control?”

Biden: “I promise you, we will be able to do that.” (followed by smug smile)

Earlier this year, on January 27th, Victoria Nuland promised that Nord Stream 2 would be halted “one way or another.” Here’s the video:

Victoria Nuland: “If Russia invades Ukraine, one way or another, Nord Stream 2 will not move forward.”

All this begs the obvious question: If natural gas provides Europeans with affordable fertilizer, food, energy, electricity, jobs and industrial capabilities, why would so many US officials demand that natural gas pipelines be taken out? Do US officials want Europeans to suffer? (More below…)

US Navy drills involved underwater explosives removal teams ran drills in the exact area of Bornholm, Denmark, in June of this year

As Sea Power Magazine reported on June 14th, of this year, the US Navy’s 6th Fleet Task Force 68 was running underwater explosives removal drills in the exact area where these sabotage explosions took place. The cover story was that the US Navy needed to conduct “mine hunting experiments” using unmanned underwater drones. From the article:

In support of BALTOPS, U.S. Navy 6th Fleet partnered with U.S. Navy research and warfare centers to bring the latest advancements in unmanned underwater vehicle mine hunting technology to the Baltic Sea to demonstrate the vehicle’s effectiveness in operational scenarios.

Experimentation was conducted off the coast of Bornholm, Denmark, with participants from Naval Information Warfare Center Pacific, Naval Undersea Warfare Center Newport, and Mine Warfare Readiness and Effectiveness Measuring all under the direction of U.S. 6th Fleet Task Force 68.

This year experimentation was focused on UUV navigation, teaming operations, and improvements in acoustic communications all while collecting critical environmental data sets to advance the automatic target recognition algorithms for mine detection. 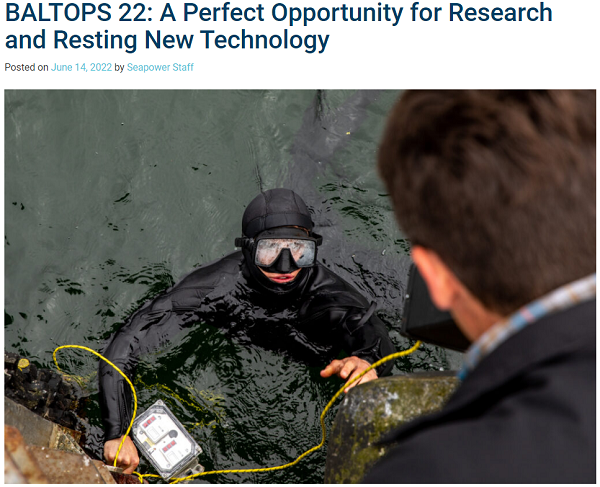 No wonder the US deep state intelligence services are desperately trying to point the finger at Russia for all this, even though Russia has zero financial incentive to destroy their own pipeline, given that this pipeline is their golden goose for billions of dollars in revenue if Germany were to reject NATO’s stranglehold and make peace with Russia.

Now, instead, there is no possibility of Germany receiving Russian gas for the foreseeable future. That option has been removed from the table thanks to this brazen act of terrorism and sabotage.

Is America’s ruthless regime at war with Europe?

It increasingly appears that the United States of America, currently occupied by an illegitimate, criminal cartel that seized power with the stolen 2020 elections, is at war with Europe. The Nord Stream pipeline sabotage means there won’t be natural gas for Germany this winter, and it points to the near certainty that chemical conglomerate BASF will be forced to shut down operations, most likely before the end of this year.

What very few people realize is that if BASF shuts down, Europe’s industrial sector will collapse.

As I pointed out in a previous article, BASF’s own spokespeople say they aren’t even sure if BASF chemical plants can ever be restarted if they are shut down, since they’ve never ceased operations since the 1960s:

The situation is so dire that Germany chemical giant BASF — formerly part of the Nazi-run IG Farben chemical conglomerate that carried out war crimes against humanity — is now threatening to shut down operations for industrial plants that have run continuously since the 1960s. As explained by author Philip Oltermann in a UK Guardian article entitled, “How gas rationing at Germany’s BASF plant could plunge Europe into crisis,” BASF is close to shutting down its massive chemical facilities in Germany due to a lack of natural gas. But shutting down production might be permanent, since no one knows if the plants can ever resume operations after a shutdown, since the very act of shutting the system down may break it.

Consider this March, 2022 Reuters article, “BASF says it would stop output if gas supplies fell to half its needs.” That article explains:

Germany’s BASF (BASFn.DE) said on Wednesday it would have to stop production if natural gas supplies fell to less than half its needs, as the world’s largest chemicals group warned of the damage to its operations from Europe’s power crunch.

The destruction of Nord Stream 1 and 2 now guarantees that BASF will be forced offline. This means European industry is over. And that means European banks are going to face widespread insolvency. The very existence of the Euro currency — and the EU itself — is now in question.

By blowing up Nord Stream, the USA has managed to set events into motion that will collapse Western Europe as we know it, transforming a First World continent into a Third World hellhole of starvation, destitution, unemployment and industrial annihilation.

This outcome has already been set in motion and cannot be stopped, since the Nord Stream pipelines cannot be repaired for months or years (there are no official estimates of repair times that have yet been made public, but the situation looks dire). Now, Germany and many other European nations will be forced to buy more high-priced LNG from US exporters, which just happens to shift billions in profits from Russia’s Gazprom to US-based LNG exporters.

Did the Biden regime just sabotage its own European allies in order to protect American industrial and currency dominance?

As covered in this short podcast posted yesterday, financial analyst Tom Luongo believes that the US Federal Reserve is at war with the European Central Bank (ECB) in an effort to collapse the Euro, bankrupt European banks and maintain dollar dominance for years to come (with the Petrodollar status that allows seemingly unlimited money printing by the Fed).

The Fed’s repeated interest rate increases, combined with the war in Ukraine, are causing investors to flee Europe and leap to dollar-denominated instruments such as treasuries. The Fed has already indicated they will continue the rate increases until inflation is tamed, which in a practical sense means they will raise rates until something major breaks on the world finance stage. The first thing to break, it seems, is going to be European banks and potentially the ECB itself. Listen here:

Blowing up Nord Stream pipelines accelerates the demise of the ECB and the Euro, leaving the United States as the dominant industrial and currency powerhouse of the western world. But it also underscores the stunning sense of panic among US Treasury and Fed officials, as they sacrifice their European allies to try to keep the fiat dollar afloat a little while longer, even as national debt approaches $31 trillion and the money printing machine goes into overdrive.

The recent $12+ billion approved for Ukraine is clearly just a coordinated final-stage looting of America’s coffers by the political elite who are fully aware that nearly all the currencies of western nations — including Japan and the United States — are on the brink of collapse.

We appear to be in a global state of world war right now, and the ruthless occupiers currently running the United States government are willing to plunge 100+ million Europeans into mass starvation, freezing and joblessness in order to buy a little more time for the US currency Ponzi scheme. With friends like Biden, Obama and Nuland, who needs enemies?

Get the full, shocking details in today’s Situation Update podcast: