Amanda Knox’s name will forever be associated with the murder of British student Meredith Kercher, who was found stabbed to death in her bedroom in Perugia, Italy in 2007.

But while Knox gained notoriety, Rudy Hermann Guede, the only person who remains convicted of her death, seemed to fly under the radar. And now, he’s being released back into the community full-time with three years of his sentence still to serve.

“I continue to this day to be shocked that he is the forgotten killer. The one who was quietly tucked away, convicted of a lesser crime, and does not have to live with the burden of forever being associated with Meredith’s death,” Knox told Good Morning America this week, in light of the news.

Guede was originally sentenced to 30 years in prison, but had his sentence reduced to 16 on appeal. In 2017 he was granted partial release to get a master’s degree and work in a library. In December 2020, he’s been granted permission to continue the remainder of his term, slated to end March 2022, through community service. https://platform.twitter.com/embed/index.html?dnt=false&embedId=twitter-widget-0&frame=false&hideCard=false&hideThread=false&id=1335930843617964037&lang=en&origin=https%3A%2F%2Fwww.mamamia.com.au%2Fthe-iceman-serial-killer%2F&siteScreenName=Mamamia&theme=light&widgetsVersion=ed20a2b%3A1601588405575&width=550px

Knox said she wished Guede – who maintains his innocence – had been “fully held accountable for what he did”. Instead, he’s free to live relatively unrecognised in the community, while she remains forever linked to a crime she didn’t commit.

What happened to Meredith Kercher?

At around midday on November 1, 2007, Knox returned to the home she shared with Meredith Kercher and two other roommates to find the front door open and drops of blood in the bathroom.

Kercher’s bedroom door was locked, so Knox assumed she was still sleeping.

After showering, Knox noticed faeces in the toilet as well as a broken window. 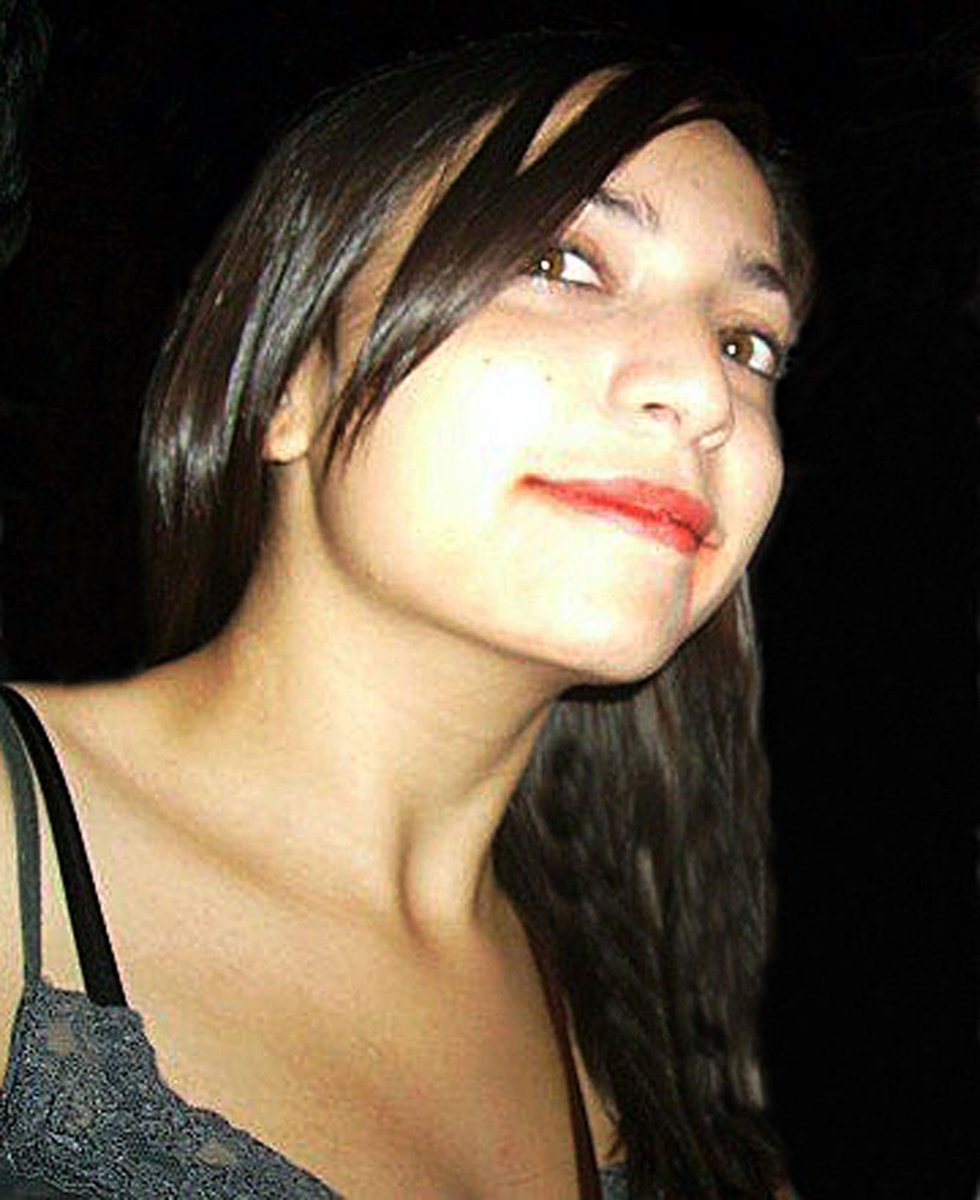 Knox’s boyfriend at the time, Raffaele Sollecito, attempted to enter Kercher’s bedroom with no success.

The two officers first on the scene kicked down Kercher’s door and found her bloodied body covered in a bedspread, with her throat cut. The 21-year-old was partly undressed and there was evidence of sexual trauma. Her bedroom window had been broken.

Knox and Sollecito were taken to the police station and interrogated for five days.

Knox claims that during this time she was bullied and beaten and wasn’t provided an interpreter – with the interrogation leading to the couple both being arrested and charged. 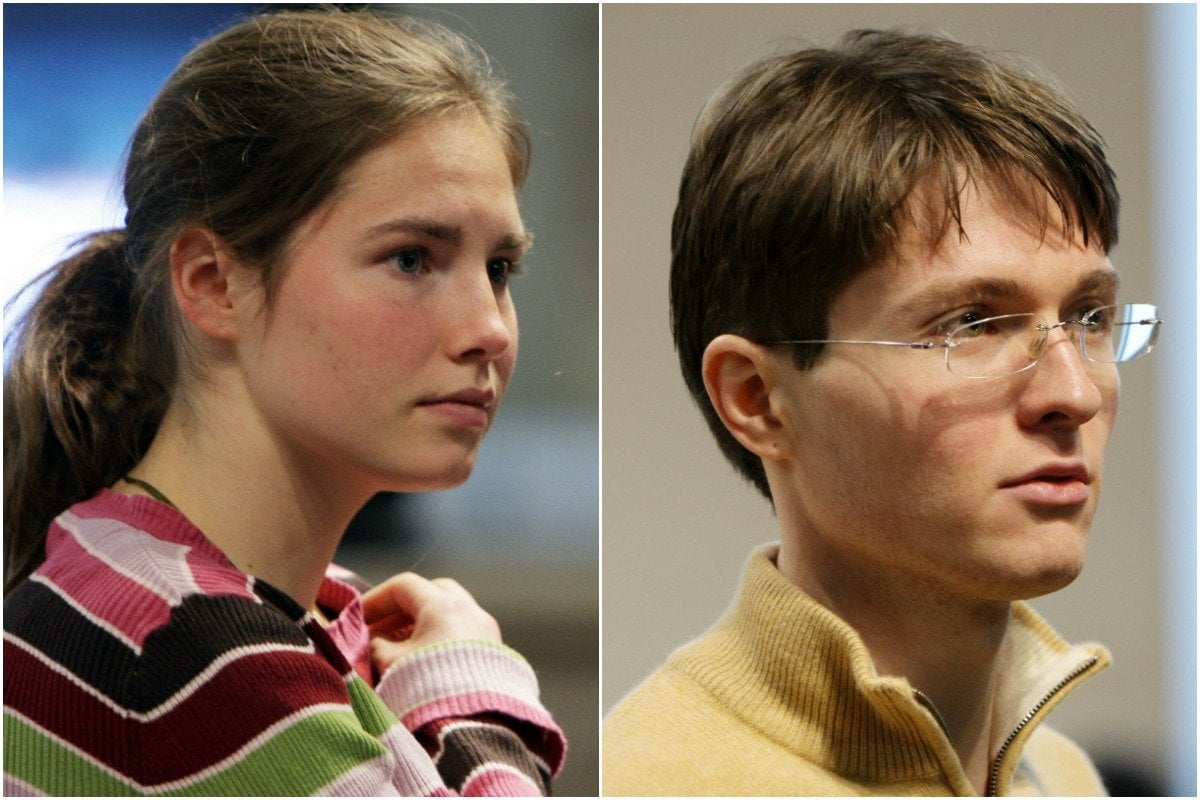 Amanda Knox and Raffaele Sollecito during their trial in 2009. Image: Franco Origlia/Getty.

Bloodstained fingerprints of a known burglar, Rudy Guede, were found throughout Kercher’s room, and police theorised that Guede, Knox and Sollecito had all been involved in Kercher’s death in ‘a sex game had gone wrong’.

In 2008, in a separate, fast-tracked trial, Guede was convicted of murder and sexual assault and sentenced to 30 years, reduced to 16 on appeal.RELATIONSHIPS”I was a successful psychologist when I was diagnosed with autism at 58.”RELATIONSHIPS’Months after I bought a house with my boyfriend, I found out he’d been catfishing me.’ADVERTISEMENT

The following year, Knox and Sollecito were also convicted of murder, sentenced to 26 and 25 years respectively. 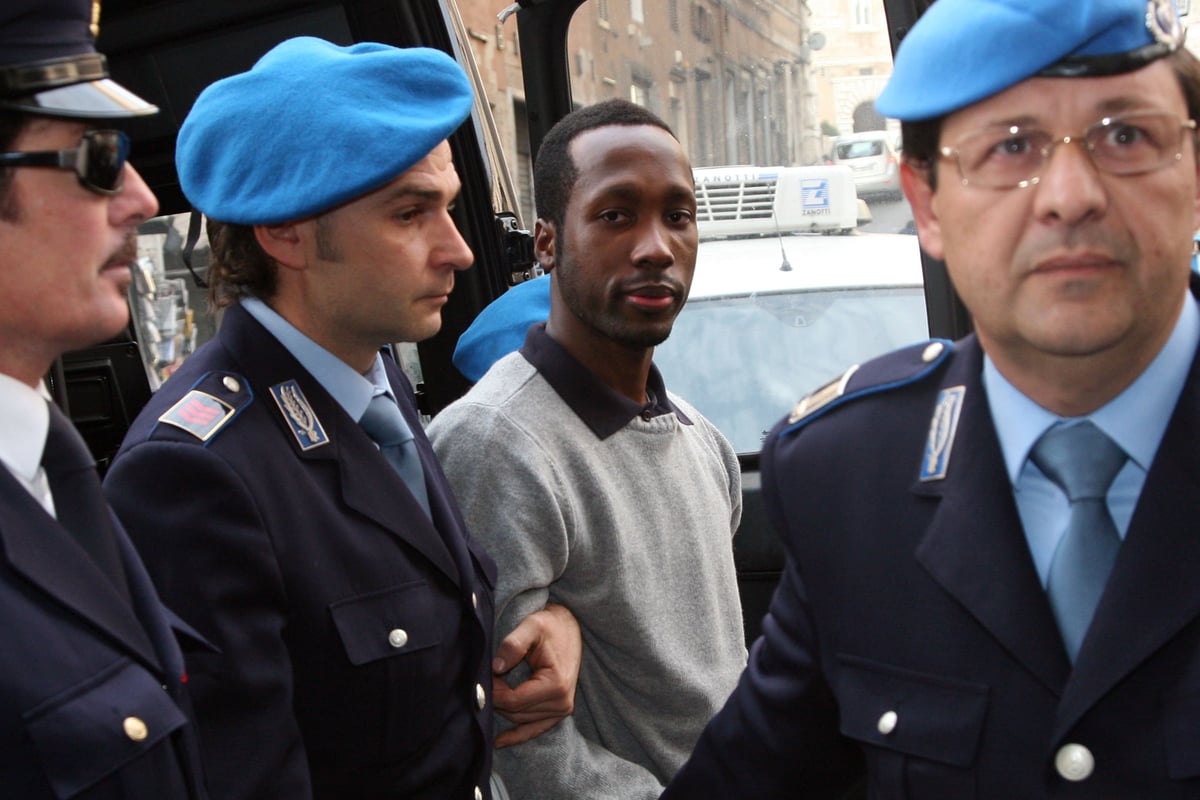 “Foxy Noxy” and her trial by media.

Knox was portrayed by the media during her trial in an Italian court as a manipulative femme fatale who did not mourn appropriately for her friend – a characterisation which still lingers.

The prosecution initially alleged that Knox, Sollecito, and Guede plotted a sexual torture scene ending in Kercher’s death simply because Knox didn’t like her. ADVERTISEMENT

The media found the name “Foxy Noxy” on her MySpace page, and transformed a moniker from highschool used to describe her skills at soccer, into a sexually fuelled persona that they then used to drive storylines.

Knox would go on to become a global tabloid sensation labelled everything from a “sex-mad American party girl” to an “evil temptress” with Sollecito and Guede barely mentioned. 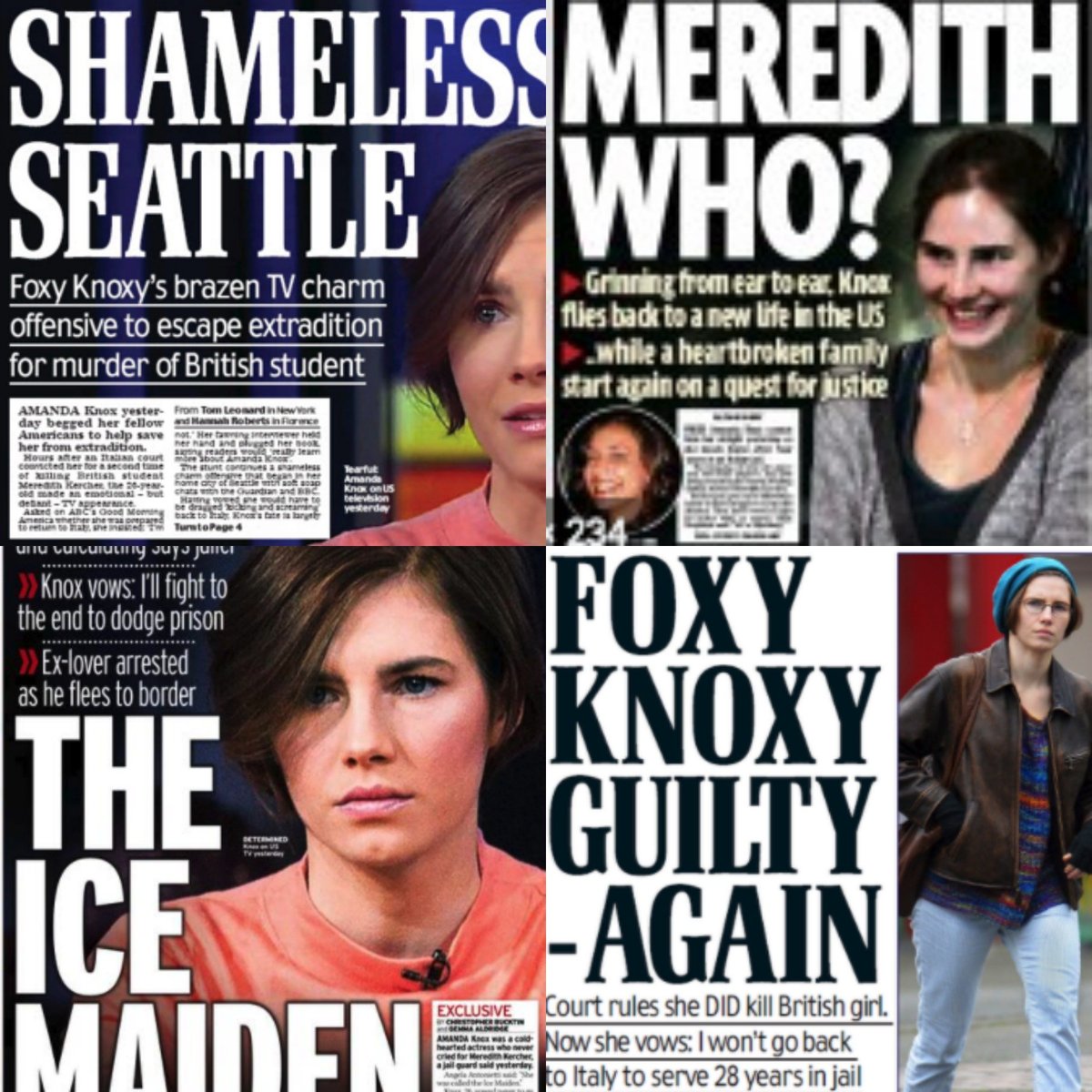 The tabloids loved the “Foxy Noxy” storyline and covered it relentlessly.

“I could have been the kinkiest person in the world it and it shouldn’t have mattered because it has nothing to do with the evidence of the case,” Knox told Newsweek.

Along with her boyfriend Sollecito, Knox spent almost four years in an Italian prison, before being they were finally acquitted.

The pair was released in 2011, ordered to be subjected to a retrial in 2013, reinstated as guilty in 2014, and then finally acquitted for good in 2015. Italy’s highest court ruled that their convictions had been the result of “stunning flaws” in the investigation. 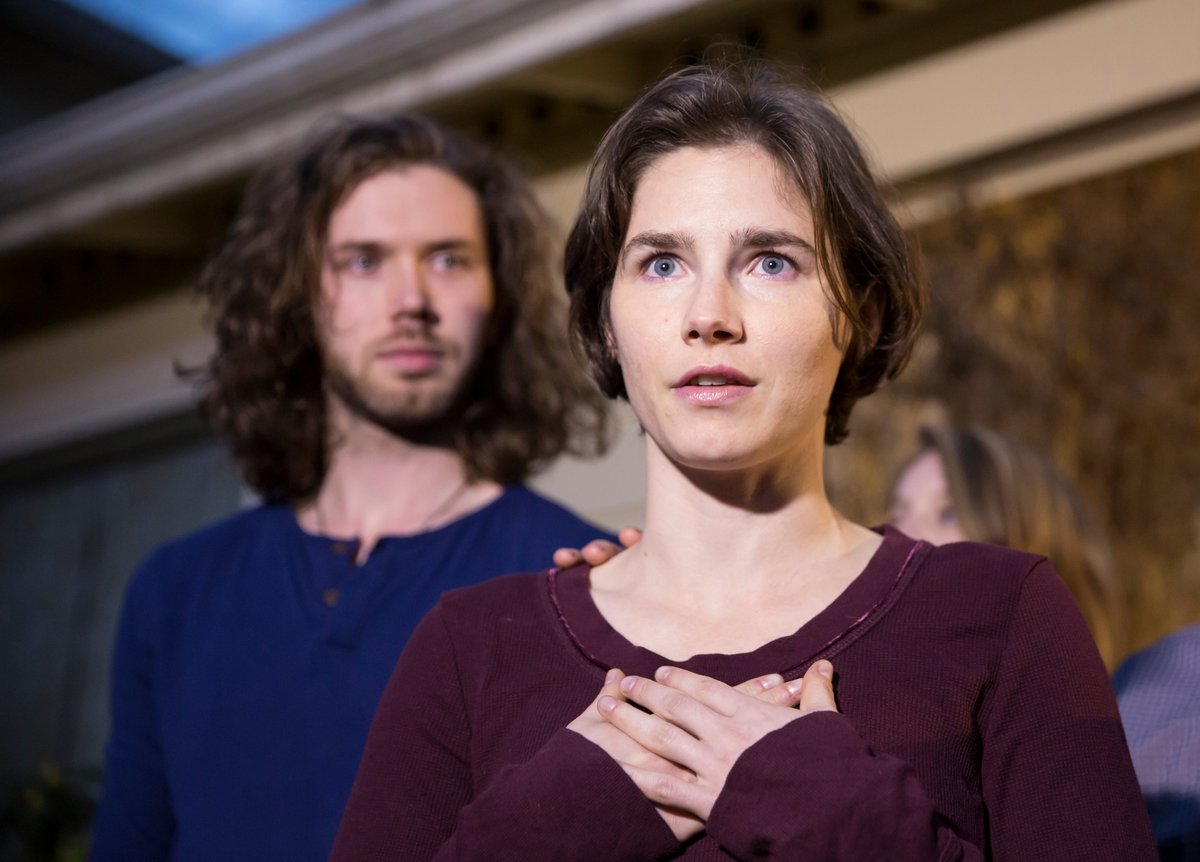 Amanda Knox speaks to media after being acquitted of murder in 2015. Image: Stephen Brashear/GettyNEWSWhat you need to know about COVID-19 today, Monday January 11.ADVERTISEMENT

There was no evidence that Knox and Sollecito were involved in Kercher’s murder, and the crime is now understood to have been perpetrated by Guede alone.

Since her definitive acquittal in 2015, Knox has moved back to the United States and pursued a career as an author and journalist, but the case still overshadows public perception of her and to this day she fights against preconceived misconceptions.

In June 2019, Knox returned to Italy as a keynote speaker at a conference on criminal justice, where she was part of a panel titled “Trial by Media”.

She spoke about the moment she was told about her 26 year sentence, telling a packed room: “My innocence didn’t save me because the media created a story… and people liked that story. I was the dirty man-eater, Foxy Knoxy. 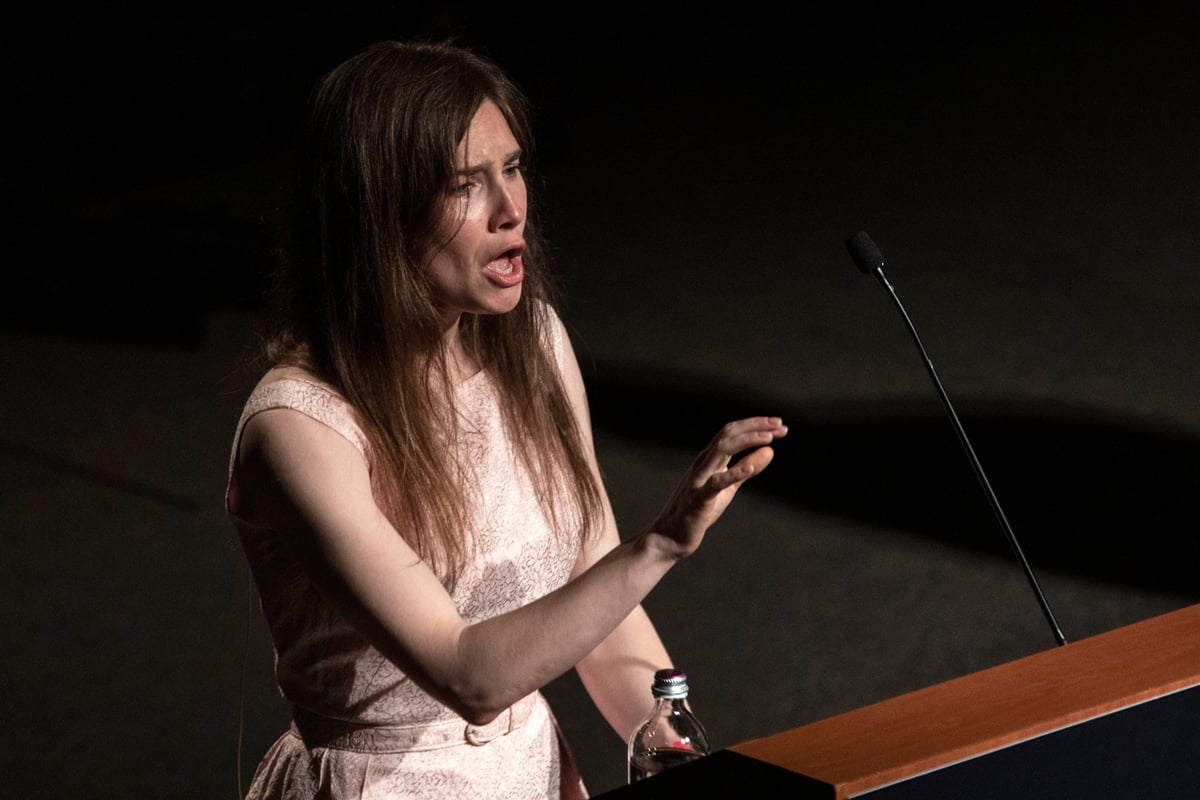 Knox during the “Trial by Media” conference in 2019. Image: Emanuele Cremaschi/Getty.

“I wasn’t innocent until proven guilty, I was a wise, drugged-up whore – it was unfounded but it awoke people’s imagination. These sensational and defamatory images also entered the courtroom. The investigation was contaminated and the jury corrupted. It was impossible for me to have a fair trial.”LIFESTYLE’I’m 58 and I’m tired of working hard, all the time, to be enough.’ADVERTISEMENT

Who is Rudy Hermann Guede?

Rudy Hermann Guede was a drug dealer well known to police long before his fingerprints were found at the crime scene of Kercher’s murder.

When police tried to contact him, he’d fled to Germany and was extradited back to Italy where he repeatedly modified his story, but always protested his innocence.

Guede received a reduced sentence of 16 years on appeal and remains the only person to be given a final conviction in Kercher’s case.

On December 4, 2020, the now 33-year-old was granted permission to continue community service at a Catholic charity and a food kitchen, for the remainder of his term. He will also continue his job as a researcher and librarian at a criminology centre which he has been doing on partial prison release since 2017.

His lawyer, Fabrizio Ballarini, said the convicted killer will now live in an apartment in Viterbo, insisting he is “calm and socially well-integrated” after years of good conduct, reports the New York Post.

“We are very satisfied with the decision which has come about because of my client’s desire and intelligence,” said Ballarini referring to his client’s masters in historical sciences at Roma Tre University.

So while Guede reaps the benefits of freedom, Knox continues to carry the burden for his crime.

His name is Rudy Guede.https://platform.twitter.com/embed/index.html?dnt=false&embedId=twitter-widget-1&frame=false&hideCard=false&hideThread=false&id=1335684435514036224&lang=en&origin=https%3A%2F%2Fwww.mamamia.com.au%2Fthe-iceman-serial-killer%2F&siteScreenName=Mamamia&theme=light&widgetsVersion=ed20a2b%3A1601588405575&width=550px