Comment: China is establishing a PROSPEROUS New Silk Road where all nations retain their sovereignty, develop their infrastructure and pull their citizens OUT of POVERTY. Our Criminal Elite bomb infrastructure, destroy countries and leave children and everyone to starve & die. It couldn’t be more evil. It’s China VS Zionist Occupied Governments of USA & EU. Here is an example of a Satanic criminal harbored in the United States and prospering here: 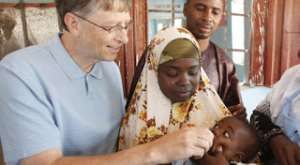 Bill Gates the Messiah playing for Jesus Listen to article

Bill Gates’ rich wealth both supports and kills because he believes in depopulation, yet many see him as a modern ‘messiah.’

The Bill and Melinda Gates Foundation is praised for its philanthropy around the world, but much of the foundation’s good deeds are merely no-consent vaccine experiments carried out on the poor.

Billionaire Bill Gates has spoken out about the immigration crisis in Europe saying that the continent will be “devastated by African refugees” unless severe and immediate action is taken.

In an interview with German newspaper, Welt am Sonntag, Gates suggested that European nations must work together to reduce the population growth in Africa by committing more in overseas aid.

But? No less then President Putin has warned that Bill Gates is “experimenting” on Congolese villagers, infecting them with a rare strain of the Ebola virus and that research and development of “Ebola as a bioweapon” have been quietly recommended in a remote corner of the troubled African nation.

And now the Ebola virus is racing through the Congo and will most likely reach its neighboring countries. What Gates doesn’t think about is the possibility that an Ebola pandemic is just around the corner with a ravaging effect. Yes, what comes around goes around mister Gates…

In a total backtrack of his usual New World Order style open border policies, Gates is now suggesting that the mass influx of migrants into Europe from Africa is threatening to overwhelm countries like Germany who have welcomed globalism.

Bill Gates recently caused a huge controversy in Africa when the Bill and Melinda Gates Foundation was accused of secretly sterilizing millions of women in Africa by doctors in Kenya after abortion drugs were discovered in Tetanus vaccines.

Could this have been a test for his proposed depopulation program?

Zero Hedge reports: According to Gates, the combination of explosive population growth in Africa combined with Europe’s notoriously generous open-border migrant welfare programs – as illustrated by the ‘German attitude to refugees’ have incentivised migrants to flood into Europe.

“On the one hand you want to demonstrate generosity and take in refugees, but the more generous you are, the more word gets around about this – which in turn motivates more people to leave Africa.”

By promoting open borders, they’ve sown the seeds for their own destruction. Their decision to allow millions of refugees into Europe has solidified populist conservative movements across the West that threatens to dethrone them. Now they’re trying to close this can of worms.

Yes, Bill Gates has both a good and a dark heart. One of his ambitions which he has been financing is global depopulation and his victims come from poor countries.

Bill Gates needs to understand that when Europeans went to Africa, despite all that was looted from the continent, they were never satisfied. The reason before and after independence they destroyed Africa both physically and medically.

It isn’t for nothing that Gates recently is accused by the Russian leader, Putin, of testing Ebola virus in Congo, which was true because both Aids and Ebola are bio-weapons to depopulate Africa.

As an intelligent man mister Gates, it would have been better if you ask the American government and other world leaders to find a way to solve the African crisis at home to avoid the mass emigration to Europe. In fact we ask them to come over perhaps then the rich world will be forced to help Africa instead of destroying the continent.

Apart from the African leaders, Europe and America are also responsible for the mass Africans coming to Europe in search for greener pastures.

Most of them have lost their parents because of Aids and Ebola, so they have nowhere to go. Some also want to come to Europe to enjoy what was stolen from Africa, thus; don’t let them be killed.

Like the Haitian refugees who were given dozens of diseases via water, food, and medicines in American refugee camps, it is likely that by your suggestion it will happen to the African refugees in Europe. If you have money do something good with it not evil.

Johan Van Dongen is a man who cares about humanity. As a scientist, he believes the scientific world is on the wrong track when it comes to the secret of using human beings for experiments and for testing bio-weapons.Column: JohanvanDongen