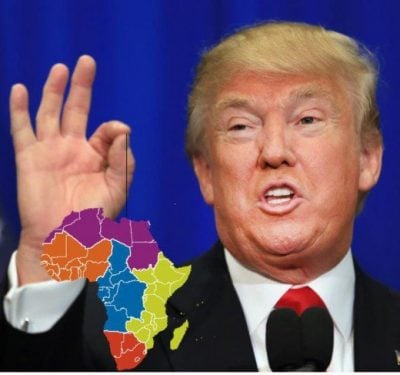 National Security Advisor John Bolton recently announced the Trump Administration’s new “Prosper Africa” strategy, which is basically a tacit admission of defeat acknowledging that the US’ objectives there haven’t been achieved since the end of the Old Cold War, but it’s also a wily trap for encouraging China and Russia to overextend themselves in this resource-rich but high-risk continent as the Great Power competition between the unipolar and multipolar blocs heats up all across the “Global South”.

The Trump Administration officially promulgated its “Prosper Africa” strategy on Thursday after National Security Advisor John Bolton presented it to an exclusive audience at the neoconservative Heritage Foundation think tank, and it basically boils down to a continental application of the “Trump Doctrine’s” America First policy in Africa’s contemporary geopolitical and economic conditions. Bolton emphasized that the US’ new approach will focus on trade and commercial relations, anti-terrorist cooperation, and the effective and efficient disbursement of aid (including to various peacekeeping missions), all of which will openly promote America’s agenda in Africa. As much as he probably hated to admit it, Bolton was forced to acknowledge that the US has failed to achieve its objectives in this part of the world since the end of the Old Cold War and that this has therefore created opportunities for his country’s Chinese and Russian Great Power competitors to become powerful forces in Africa.

Bolton spends a lot of time lamenting how China’s economic influence has extended all across the continent, attacking the Belt & Road Initiative (BRI) with the typical infowar accusations that it’s ensnared partner countries into so-called “debt traps” and confirming the author’s April 2018 forecastthat the US will obsessively focus on how this has supposedly affected the geostrategic landlocked state of Zambia. In addition, the National Security Advisor draws a line in the sand by starkly saying that “the balance of power in the Horn of Africa—astride major arteries of maritime trade between Europe, the Middle East, and South Asia—would shift in favor of China” if Djibouti transfers control of a port terminal to the People’s Republic. As for Russia, Bolton accuses it of “corrupt economic dealings”, “selling arms and energy in exchange for votes at the United Nations”, and “continuing to extract natural resources from the region for its own benefit.”

In other words, the US’ repeated failures in the two and a half decades since the end of the Old Cold War enabled China to emerge as Africa’s leading economic partner while Russia is making inroads in becoming a reliable provider of security in exchange for extraction contracts, with both Great Powers complementing one another’s multipolar activities to collectively break the unipolar monopoly that had previously controlled the continent. Bolton believes that Chinese and Russian activities “stunt economic growth in Africa; threaten the financial independence of African nations; inhibit opportunities for U.S. investment; interfere with U.S. military operations; and pose a significant threat to U.S. national security interests”, but only the last-mentioned is true. African economic growth is exploding; countries have diversified their financial partnerships; US monopolies finally face competition; and the US is voluntarily scaling back its military activities in Africa in order to focus on more directly “containing” China and Russia in their home regions.

“New Scramble for Africa”: The UAE Will Help India “Multi-Align” Against China in Africa

The Sino-Russo Threat To American Hegemony

The only reason why any of this could be interpreted as “a significant threat” is because the US can no longer interfere in African affairs as much as it would currently like to do in order to offset the Chinese-African Strategic Partnership that lies at the core of China’s future success. The 21st-century geopolitics of the emerging Multipolar World Order are such that China needs African markets, labor, and resources in order to secure its continued growth, stability, and ultimate rise as a global superpower, hence the win-win relationship between the two whereby China helps develop Africa in exchange for obtaining reliable access to its natural and human resources. Regarding Russia, its Afro-Eurasian “balancing” act has a considerable chance of succeeding if Moscow combines its recent security gains with its plans to connect the continent via its involvement in the West-East and North-South Trans-African Railways and then diplomatically balances the two emerging “blocs” in the modern-day “Scramble for Africa”.

In response to its self-evident failures over the decades, the US is now putting forth the so-called “Prosper Africa” strategy as its intended solution, though Bolton was very vague about what exactly it entails and the instruments that will be employed for executing it. Representing a businessman-turned-president, he clearly understands the need for his country to support American investments in Africa and make competitive bids for countering Chinese infrastructure projects. Concurrent with this, Bolton spoke about “strengthening the rule of law”, and it’s here where he may have hinted at the real methods that his country will utilize in pursuit of its interests. Recalling the rampant corruption in all levels of most African governments and the way in which the US exposed this in Brazil to facilitate a “constitutional-electoral coup” through the NSA-backed “Operation Car Wash”, America might resort to using its national infowar strategy for catalyzing similar Hybrid War outcomes all across Africa.

In the New Cold War context, this simply means that Chinese- and Russian-friendly governments could be undermined “from below” after NGO-affiliated “grassroots activists” collaborate (whether knowingly or not) with US intelligence services to spread supposed proof of corrupt practices and other “politically compromising” material across society in an effort to encourage a Color Revolution, “constitutional-electoral coup”, and/or an Unconventional War that would increase the security costs and overall strategic risks of multipolar investments in these targeted states. By taking a step back and somewhat “withdrawing” under the pretext of saving the American taxpayers more money, including by pulling out support for certain UN peacekeeping missions, the US ipso facto forces China and Russia to take on more multidimensional responsibilities in Africa before they’re ready, which could bait them into “mission creep” and its quagmire consequences if they aren’t careful. At the same time, however, this wily trap could also backfire if China and Russia succeed in replacing the US.

The “Prosper Africa” strategy that was just unveiled by the US is a lot wilier than it first appears because it initially seems to be nothing more than a long-overdue acknowledgement that America’s previous approach to the continent has failed and that the country is therefore going to scale back its military involvement there in exchange for reprioritizing more cost-effective economic engagement. While that’s veritably true, observers nevertheless shouldn’t be deceived into thinking that the US is surrendering its previous hegemonic position, let alone without a fight. What America’s actually doing is preparing a trap for its Chinese and Russian competitors by baiting them into “mission creep” through a combination of security vacuums (after possibly pulling out support for some peacekeeping missions) and forthcoming US-backed infowar-driven “anti-corruption” Color Revolution unrest in some of their partnered states. The outcome of this gambit is still far from certain, but what’s clear is that the New Cold War has now officially spread to Africa.

Note to readers: please click the share buttons above. Forward this article to your email lists. Crosspost on your blog site, internet forums. etc.

This article was originally published on Eurasia Future.

Andrew Korybko is an American Moscow-based political analyst specializing in the relationship between the US strategy in Afro-Eurasia, China’s One Belt One Road global vision of New Silk Road connectivity, and Hybrid Warfare. He is a frequent contributor to Global Research.