‘Positive sign after years of hardline rhetoric’: Russian senator on US lawmakers’ call for dialogue

The call for dialogue from US lawmakers who urged Washington to “urgently engage with Russia,” after President Putin presented new advanced Russian arms, seems to be a step towards policy change, Senator Konstantin Kosachev said.

On Thursday, a group of US lawmakers argued for starting a dialogue with Russia “to avoid miscalculation and reduce the likelihood of conflict,” according to a letter to US Secretary of State Rex Tillerson. The news was called “encouraging” by Kosachev, who is the head of Russia’s upper house Committee for International Relations. 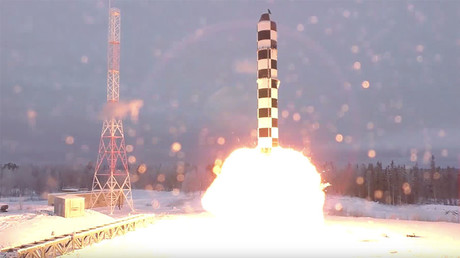 “After many months and even years of hardline rhetoric, including demands to break off the relationship, from US congressmen and senators towards Russia, there are signs of ‘positive,’ not ‘negative’ parliamentary pressure on the US President,” Kosachev wrote on Facebook.

The senator hopes that such “adequate” perception of Putin’s state of the nation address would be followed by an “adequate and reasonable” change in the US policy of strategic stability and collective security. “After all, the threats in the modern world are common to [both] our countries,” he said.

The chairman of the Upper House commission for information policy, Aleksey Pushkov, believes that sometimes it is “useful” to disclose the weapons you have in your arsenal as it has a “sobering” effect.

“For the first time in the US Senate they are calling for negotiations with Russia on nuclear weapons,” Pushkov tweeted. “Sometimes it is useful to say what weapons you have. It sobers [the others] up.”

The US senators’ letter came a week after Russian President Vladimir Putin’s state of the nation address, in which he unveiled a set of advanced nuclear weapons. Putin stated that the US and its allies had neglected Russia’s legitimate security concerns and pushed it to develop the arms.

“Nobody wanted to talk to us about the root of the problem. Nobody listened to us; so listen to us now!” he said.
Political commentator John Bosnitch believes that Putin’s words seem to “hit a dead-center strike.”

“Everybody in the world is listening to Vladimir Putin right now,” Bosnitch told RT.

The US actually pursued the goal of developing the same set of weapons that Russia recently announced when it pulled out of the Anti-Ballistic Missile (ABM) Treaty back in 2002, Bosnitch added.

“The United States has threatened it and Russia has delivered it,” he said. “So now we are talking about two equal partners sitting across from each other at a negotiating table in which one cannot threaten the other.”

“These are the preconditions for real, substantive and productive disarmament talks. And that’s what we all need.”

My Comment:  The Senators calling for dialogue with Russia include:  Bernie Sanders, Diane Feinstein (California), Jeff Merkley (Oregon) and Markey of Massachusetts.