A never-shown Al Jazeera documentary on the pro-Israel lobby in the United States reveals possibly illegal Israeli spying on American citizens, and the lobby’s fear of a changing political mood.

ICH – Israel secretly armed and funded at least 12 rebel groups in southern Syria that helped prevent Iran-backed fighters and militants of the Islamic State from taking up positions near the Israeli border in recent years, according to more than two dozen commanders and rank-and-file members of these groups.

Israel also provided salaries to rebel fighters, paying each one about $75 a month, and supplied additional money the groups used to buy arms on the Syrian black market, according to the rebels and local journalists.

MONDOWEISS – By now, Israel should have invaded Gaza again. The Great March of Return has won worldwide respect for Gazans and encouraged their resistance. This Israeli defeat in global opinion, along with the fires on the Israeli side of the border caused by Palestinian kites, should have already prompted a massive ground attack. Previous Israeli invasions, in 2008, 2012 and 2014, required fewer pretexts.

What’s more, Benjamin Netanyahu faces serious political threats, which must sorely tempt him to attack; he and his wife are under scrutiny in multiple corruption probes, and Israeli farmers near the Gaza border loudly hold him responsible for the damage caused by the burning kites. Netanyahu’s top concern is always his own political future, and a Gaza invasion would distract nicely from his problems.

SPUTNIK – A new report gets dirty on the details of Israeli funding and weapons shipments to 12 anti-government extremist groups in Syria. Buried in the end of the piece is the revelation that Israel helped evacuate so-called “rebel commanders” as they also flew out members of the self-proclaimed “impartial” White Helmets organization.

On August 22, Israel evacuated some 800 members of the White Helmets, a group funded by the United States, United Kingdom, Germany and other Western countries, that claims to be an impartial civil defense organization but has been accused by Syria and Russia of terrorism. Its members have been caught on video grinning wildly as a child nearby was being beheaded in addition to other atrocities, while a high-budget film about the group won the 2017 Academy Award for best documentary.

ELECTRONIC INTIFADA – More than 140 leading international artists have backed the Palestinian call to boycott next year’s Eurovision Song Contest if it is hosted by Israel.

Meanwhile more evidence has emerged of Israeli manipulation of the 2018 contest, and Eurovision organizers are demanding that Israel as next year’s host guarantee freedom of expression and movement.

“Eurovision 2019 should be boycotted if it is hosted by Israel while it continues its grave, decades-old violations of Palestinian human rights,” the artists state in a letter published by The Guardian on Friday. CONTINUE READING

SPUTNIK – “The distinction we made between Hezbollah and Lebanon during the Second Lebanon War was a mistake,” said the official, who is the senior officer in the army’s Northern Command near the Lebanese border, about the 2006 conflict. “In the next war we will not make this distinction. We will hit Lebanon and any infrastructure that would contribute to the fighting.” CONTINUE READING

Horrifying Video Shows Israeli Soldiers Shoot, Kill 16 year-old Boy While His Hands Were In The Air

‘Gaza – A disturbing video was posted online this week that shows the moments before a 16-year-old Palestinian boy was shot down by Israeli soldiers while he stood in a field, with his hands in the air.

The boy has been identified as Ahmed Masabah Abu Tuyur, and he was pronounced dead on Saturday morning, as a result of the injuries he sustained from the shooting on Friday, according to a report from Haartz. The shooting reportedly occurred during a protest, and Abu Tuyur can be seen picking up a rock off of the ground and hurling it into the air.

In the video, it does not appear that the rock thrown by Abu Tuyur hit anything or harmed anyone, and the boy can be seen standing with his hands in the air for approximately 10 seconds before he is shot once and he collapses to the ground.

Some viewers would argue that because Abu Tuyur picked up a rock and threw it into the air, he was armed and posed a threat to the Israeli soldiers who appear to be perched on top of a sand dune. However, that logic begs the question—how is a boy with a rock a legitimate threat to a trained sniper with a gun, especially when there are a few hundred feet between them?’ 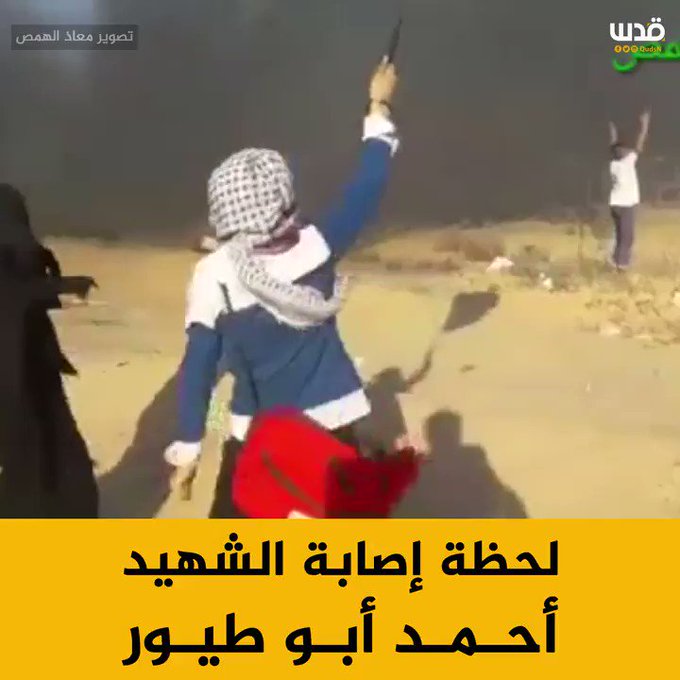