Putin For President? He Would Be Second to NONE!!! GREATEST EVER!!!

Lol Russia did this while under sanctions on a shoe lace budget. To top it off they have no foreign debt as of this year and they purchased 1800 tons of gold! They won in Syria in one year and the USA is still fighting in Afghanistan over 10 years. Putin also funded the building of 2500 churches. Maybe Putin should run our government so we don’t go bankrupt

lissa leggs So what nations threaten since the beginning of time. In modern history the USA killed more civilians the the total killed in WW2. We know who is most likely to kill more people and it’s not China or Russia. The USA dumped radiation on civilians in Serbia, Iraq and Lydia what pigs to harm childern

The Age of Putin: His 10 major accomplishments 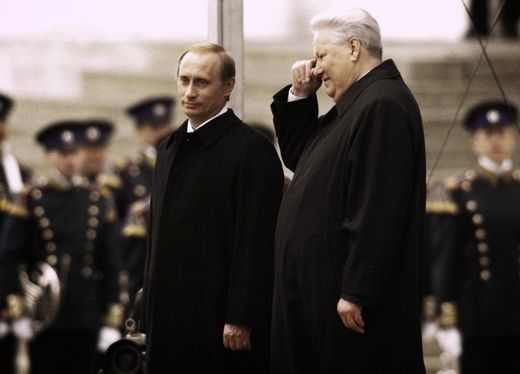 Fifteen years ago, on March 26, 2000 Vladimir Putin was first elected to the post of the President of Russia. After coming to power in difficult times, he not only managed to keep the country united. 15 years later we can say: we have again become a superpower with a developed economy, industry, a powerful army and navy. And maybe not everything is smooth today. But then, 15 years ago, many people actually thought that the country was finished. However, Putin has managed to prove to the Russians and the whole world that we can not be easily defeated.

In fifteen years, thanks to the “swift tiger,” as President Vladimir Putin is called by Chinese journalists, our country is once again referred to with respect.

We have decided to make our own rating of achievements of Vladimir Putin and his team in the last 15 years, helped by experts from Nightly Moscow:

1. THE SALVATION OF RUSSIA FROM DISINTEGRATION

Putin’s role in preserving the unity of Russian Federation is primary. The change in the territorial-administrative division of Russia, the creation of seven federal districts allowed to first slow down and then reverse the processes that were leading to a direct collapse of Russia into several pseudo-state entities. Fortunately, Boris Yeltsin timely sensed what was happening, and resigned as President. And Vladimir Putin in time identified existing threats and took a number of preventive measures.

2. THE END OF THE WAR IN CHECHNYA

Viktor Murakhovsky, chief editor of the journal Arsenal of the Fatherland:

Remember Putin’s famous phrase: “Will smash in the toilet” [“If we find them in a toilet, we will smash them in the toilet” – KR] . As we remember, he was referring to the terrorists in North Caucasus. And Putin has played a huge role in that the First Chechen campaign, culminating with the Khasavyurt capitulation, was forgotten.

But the Russian army regenerated and played a decisive role in the defeat of terrorists. The key factor was not only the effectiveness of the armed and internal forces, but that the leadership of the country expressed a political will.

3. STRENGTHENING THE ROLE OF RUSSIA IN THE INTERNATIONAL ARENA

Over the last fifteen years from a country ranking in the twenties-thirties by the degree of influence on world politics, we confidently moved into the top three – along with the US and China. The first ideological imperatives were laid down in the Munich speech of Vladimir Putin in 2007. But the first “applied” case when we showed iron will took place in August 2008 in South Ossetia. In essence Russia then stood up and said: “Tomorrow we will live by new rules!”

4. THE CREATION OF A SOCIALLY ORIENTED BUDGET

Over the past 15 years serious steps were made and the budget of our country has become truly socially oriented. But there is no limit for improvement, and I think we should not stop there. A good example is the joy of the inhabitants of Crimea after becoming a part of Russia. Because the level of pensions and social benefits there instantly rose to nationwide levels. Yesterday I was at a general meeting of the Russian Academy of Sciences, where Prime Minister Dmitry Medvedev was speaking. And he clearly said that the social obligations will be fulfilled, despite the economic difficulties.

Under Vladimir Putin, Russia has managed to significantly reduce the arrears to international financial institutions. Currently Russia, of course borrows in the foreign market, but in relation to the gross domestic product, this amount is small. First of all, it gives us the opportunity to pursue an independent policy.

Because loans from international organizations are very often accompanied by certain encumbrances. Which are often hidden behind vague wording. But often, after such “reforms” the standard of living of the population drops – we see it today in Ukraine. And, of course, if our debts were higher, the sanctions would hurt us more.

6. THE CREATION OF THE STABILIZATION FUND AND THE NATIONAL WELFARE FUND

The creation of these financial institutions was largely initiated by Vladimir Putin himself. Huge amounts of money was directed there – about two trillion dollars that the country made from the sale of oil and gas in favorable market conditions. And this money allows us now in the situation of economic crisis to mitigate its effects. In many respects the Stabilization Fund will be focused on supplementing government’s social obligations.

7. REFORM OF THE ARMY AND THE MILITARY-INDUSTRIAL COMPLEX:

Today we have qualitatively new armed forces. It is no exaggeration to say that today our army is one of the best in the world. It is recognized by all, including our opponents. It is under Putin, that our armed forces again became respected. Over the past 15 years we’ve been through a restructuring of the military-industrial complex. On the initiative of the President powerful vertically integrated holding companies were created, each of which brings together the entire chain of developers and manufacturers. As a result, Russia ranks second in the world in the export of weapons.

8. CREATION OF INTEGRATION ASSOCIATIONS IN THE FRAMEWORK OF THE UNION OF INDEPENDENT STATES

Sergei Markov, director of the Institute for Policy Studies, a member of the Public Chamber of Russia:

The creation of such associations is a key to sustainable economic development. Here is the emergence of new markets, and the possibility of joint development of technologies. But generally speaking, it is in fact the will of our people. The Russians want to stay close to those peoples who lived with us in the framework of the Russian Empire and the Soviet Union. And, very importantly, we see a positive response from our partner countries. The initiators of integration associations are, without a doubt, the President of Russia, Vladimir Putin and the President of Kazakhstan, Nursultan Nazarbayev.

Yelena Isinbayeva, two-time Olympic champion in the pole vault, the mayor of the coastal Olympic village-2014:

A major achievement is not only that we had a great Olympics from the point of view of organization, but that people from all over the world have discovered a new Russia: strong, modern and victorious. I worked with people, saw it from the inside and noticed how their mood changed from suspicion to amazement.

But how many were skeptics at first! Remember how in 2007 thanks to the personal speech of Vladimir Putin at the meeting of the organizing Committee in Guatemala, we were able to tip the scales in our favor to host the games.

10. REINTEGRATION OF CRIMEA INTO RUSSIA

Dmitry Orlov, political scientist, Director of the Agency for Political and Economic Communications:

Reintegration of Crimea into Russia was of great importance for the whole country. From a political point of view, it helped to create and expand a new coalition supporting the government. Emerged the phenomenon of patriotic mobilization of public opinion, which continues to this day. It is also called the “Russian Spring”. Today, according to research centers, this effect has not been yet exhausted. Of course, reintegration of Crimea was a very significant step, but, importantly, this is just one of the episodes of the era of Vladimir Putin. 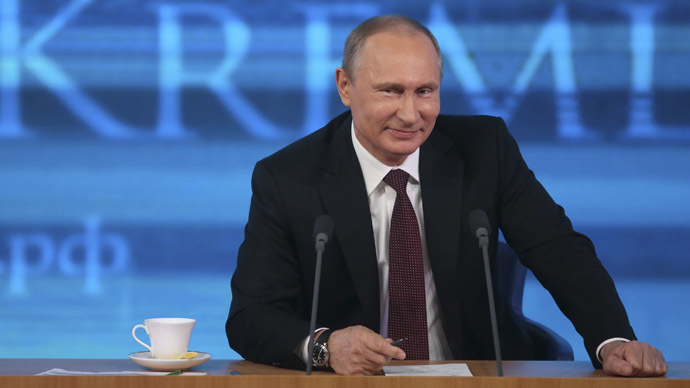 Russian President Vladimir Putin smiles as he takes part in a televised news conference in Moscow December 19, 2013. (Reuters/Mikhail Metzel) / Reuters
Vladimir Putin’s most important accomplishments as president are successful foreign policy, the growing military strength, and the general improvement of living conditions in the country, according to the latest opinion poll.

The independent Levada Center released the poll on Tuesday. The strengthening of Russia’s position on the international stage is Vladimir Putin’s most important success according to 30 percent of those responding. The number has increased from 26 percent in 2008, and 19 percent in 2004.

Maintaining political stability in the country ranked second with 29 percent of people saying it is Putin’s primary achievement, and almost the same share of respondents – 28 percent – say it is the reform of the Russian military and the general strengthening of the nation’s defense capability.

About a quarter of Russians value most the improvement in living standards and the growing incomes of ordinary people, and a similar number say that with Putin as a leader they feel growing optimism.

Only eight percent of respondents claimed that they could not point at any achievements that can be attributed to Putin’s leadership.

The poll was conducted in late August in 134 places in 46 regions across Russia.

Vladimir Putin’s popularity reached a historical record in August when 52 percent of people told the Levada Center that they would vote for Putin if a presidential election was held the next weekend. The figure was just 29 percent in January this year. Among Russians with firm political preferences the share of Putin’s supporters was even higher at 82 percent. Another influential pollster, the Public Opinion Foundation, conducted similar research a week earlier and found that 68 percent of all potential voters were ready to support Putin in presidential elections, compared to 58 percent in March and 46 percent in January.

Russian analysts attribute the current success of Putin and his allies to the difficult international situation and the acute crisis in Ukraine that has led to a mobilization of society in the face of pressure from the West.