A rally in Oregon sponsored by the right-wing group Patriot Prayer turned violent on Saturday as demonstrators clashed with anti-fascist protesters, who showed up in opposition to the event.

The Portland Police Bureau said that four people were taken to the hospital as a result of clashes at the gathering. One person suffered a serious, but non-life-threatening injury, while three others suffered non-serious injuries, the police said.

Four people were arrested in connection with criminal investigations that began before the Saturday protest, police added.

Amid the fighting, police declared that the so-called “Freedom and Courage” rally had turned into a riot and revoked the Patriot Prayer’s permit to hold the event at the Terry Schrunk Plaza, a federal park, in downtown Portland.

Some footage of the violence:

Counterprotesters threw eggs, half-empty water bottles and firecrackers at demonstrators shortly after the march by right-wingers began, The Oregonian reported.

In response, according to the paper, police fired pepper spray-filled paintballs into the crowd. Police also used firecrackers, smoke bombs and flash bangs to deter the violence, KOIN 6 reported.

Police denied using tear gas during the protest but said they did use “aerial distraction devices.”

Officers with the Department of Homeland Security were also at the demonstration. 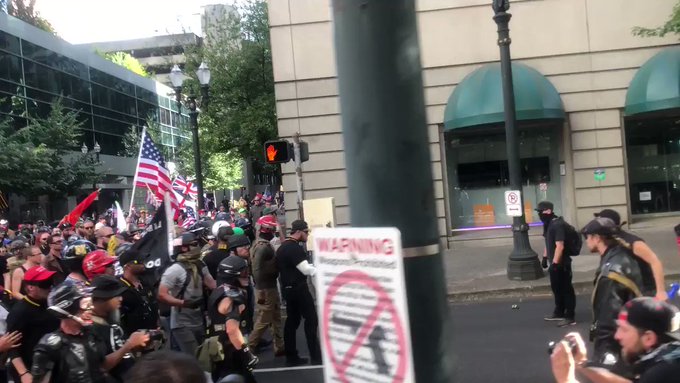 Videos filmed by journalists showed Patriot Prayer demonstrators and counter-protesters charging at each other and brawling on the streets while explosions erupted around them.

In a series of tweets, freelance reporter Mike Bivins said that counterprotesters were throwing eggs, garbage and  rocks at Patriot Prayer demonstrators, then things “ratcheted up.”

Jason Wilson, a writer for The Guardian who was covering the rally, said in a tweet that the confrontation between the groups “would have to be among the worst protest violence I have seen in Portland” and included “unfair fights.”

The frontal confrontation on SW Main earlier would have to be among the worst protest violence I have seen in Portland – beatings, police and protester gas weapons, firecrackers going off, and lots of unfair fights (ie several people beating on one person) 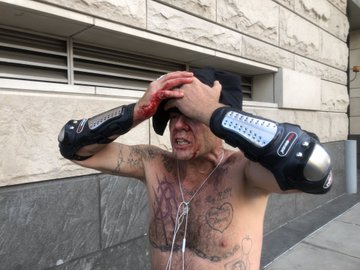 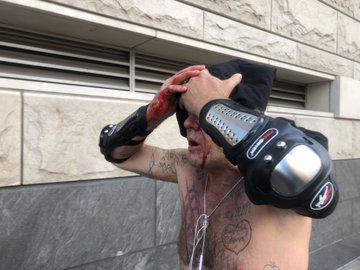 This dude w the Patriot Prayer rally had his face busted open. #DefendPDX

Police reported seeing assaults, criminal behavior and “projectiles being thrown” during the rally. Earlier Saturday, police said they made “probable cause” arrests and tweeted photos of weapons they seized during the demonstration. 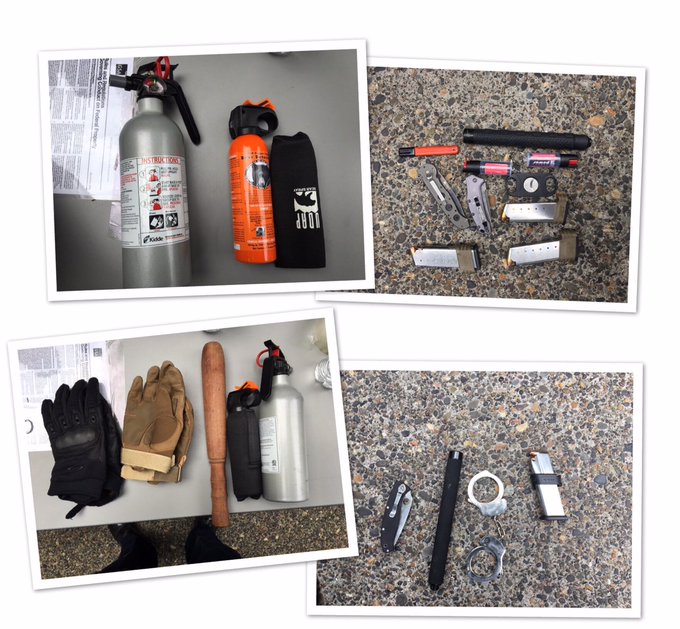 Officers have made probable cause arrests in today’s demonstration around Terry Schrunk Plaza and Chapman Square. Ofcs are also seizing weapons.

This rally has grown pretty substantially in the last two hours. Patriot Prayer has a decommissioned school bus. Black paint obscures the former district this belonged to. The bus driver is wearing an eye patch with a scull and crossbones and smoking a cigarette.

The “Freedom and Courage” event was organized by Patriot Prayer leader Joey Gibson, who’s hosted past rallies that have also turned violent and attracted white nationalists.

Subscribe to The Morning Email.
Wake up to the day’s most important news.

A group that identifies on Facebook as Eugene Antifa ― based in Eugene, Oregon ― organized the counterprotest, which they named “Defend PDX: Patriot Prayer’s Violence Must End.” The group also identified Gibson and the Proud Boys as their main opponents.

“It is very important that antifascists keep up the pressure so that we can stop them once and for all,” a Facebook event page for the counterprotest read.

“While many acolytes have broken away from Gibson at this point, the core that remains, largely Proud Boys, have grown increasingly violent,” the page said. “For this reason we must sustain our campaign, and keep up our efforts on as many fronts as possible until they completely cease their despicable activity.”

In anticipation of the rally, Portland police said there would be “significant law enforcement presence” in the downtown due to previous protests that erupted in violence between the groups.

Clashes between Patriot Prayer and their opponents broke out during a rally on June 3, leading to at least four arrests. The groups also dueled at several rallies held in 2017.

CORRECTION: A previous version of this story misstated the name of the Portland Police Bureau.

The left’s mad hysteria about Trump In 1841, Charles Mackay wrote the classic psychological study, Extraordinary Popular Delusions and the Madness of Crowds. He observed: “We find that whole communities suddenly fix their minds upon one object and go mad in its pursuit; that millions of people become simultaneously impressed with one delusion and run after it.”

Holland’s Tulip mania and the Salem witch trials are history’s most notable examples of mass hysteria. The pathology relies on an emotional loop. The delusion feeds the crowd and the crowd feeds the delusion until the whole thing becomes large and unwieldy.

The election of Donald Trump whipped a segment of American culture into a frenzy. Their hashtag – #TheResistance – is emblematically absurd, suggesting cultural marginalization that simply does not exist.

If you are an uncritical sap who wishes to be affirmed in news programs, movies, and late-night comedy bits, you are showing pliancy, not resistance.

Their self-deception would be mildly entertaining except for one thing: the deluded get to use the institutions of government and media to indulge their fantasies. They can fixate attention upon any claim, however far-fetched, of Trump-atrocity.

It does not matter that Trump-atrocity was Obama policy just 20 months before with no attendant outrage. The claim of Trump-atrocity feeds the emotional loop.

Consider, for example, the recent illegal immigration fury. The resistance refused to consider any factual distinction that would disrupt their self-indulgent moral pose.

Fact: The “cages” as they were called were hastily constructed detention centers in use during the Obama administration for the same purpose.

Fact: The process of administering immigration laws requires such an intermediate place for processing applications and denying entry to the unworthy.

Fact: Ellis Island was a detention center surrounded by water with buildings to medically quarantine any child showing signs of disease before putting him or her on the next ship home.

By ignoring these facts and inventing others, the hysterical left managed to turn a modern version of Ellis Island into Auschwitz.

Then there is this Russian collusion fantasy. The left’s self-regard had always been rooted in the idea that they are champions of the common man. When the common man rejected them, Bruce Springsteen himself could not explain it except as a fraud.

They responded by fabricating an alternative reality where they were unfairly denied the presidency. Putin did it!

There is no evidence of Russian collusion, nor could any of its devotees describe, if pressed, just how Trump and Putin stole the election.  The facts that have been uncovered about the investigation’s reasons and sources are beyond compromising. Any of them alone should be enough to discredit the whole thing.

To those outside of the emotional loop, the resistance’s slavish devotion to Russian collusion is as if producers set out to make a flop only to have the audience cheer every linear plot failure.

Nobody is laughing, though.  The 65 million who voted for Trump feel unfairly marginalized. The deplorables rightly conclude that these fantasies are given undue credence to protect the establishment from an outsider.

In the end, only one thing can shatter mass hysteria and that is an intervention.  The rest of America must sit the resistance down and show them how they are wrong. Criminally prosecuting the fabricators of the principal delusion would do the trick.

The person who started the Russian collusion investigation, FBI counterintelligence expert Peter Strzok, sent his lover a text one week later assuring her that “we’ll stop” Trump.  That is conclusive evidence that the investigation was a scheme to tamper with the presidential election.

Adding to the weight of this evidence is that the FBI tried to bury it.  The incriminating text was not turned over to the inspector general or to Congress and was only discovered by accident last month attached to a cell phone app where it did not belong.

Usually in legal proceedings, any attempt to hide a document raises an adverse inference that it is devastating to the entity doing the hiding, here the FBI.

There is abundant documentary support to prosecute Strzok.  Admittedly, first they must fire him, and even that is proving unusually difficult.

What is needed is a prosecutor with enough gumption to defy the hysterical left.  That leaves out Sessions and Rosenstein, sure, but there is plenty of time left. People really must go to jail for this.  Maybe a strong dose of reality would restore national sanity.