Britain’s Royal Navy Brings Manchester Bomber Back From Hiding in Libya: Still Think U.K. in NOT Complicit in Terrorism? 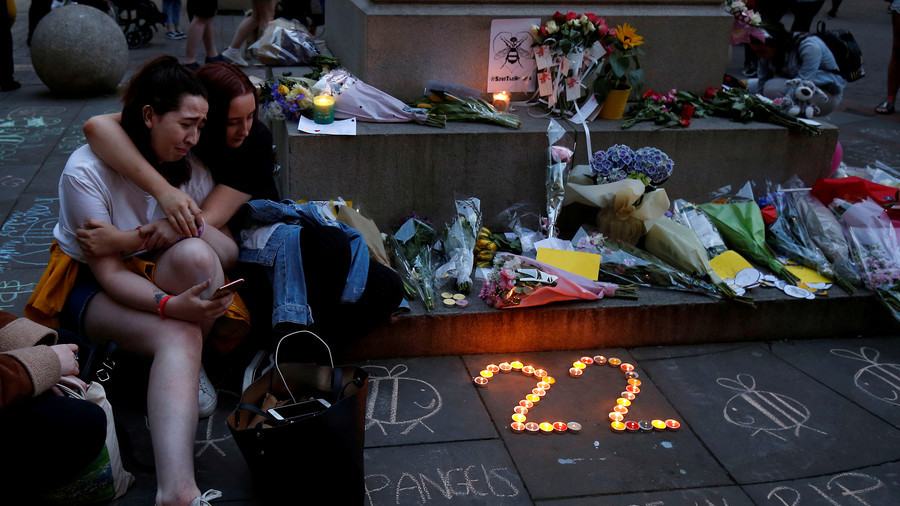 A memorial to mark the first anniversary of the Manchester Arena bombing. © Andrew Yates / Reuters
Reports that the Manchester Arena suicide bomber was evacuated from Libya by the Royal Navy has sparked a flood of reaction on social media and prompted Nigel Farage to proclaim that “Europe is committing suicide.”

The former leader of the Eurosceptic UK Independence Party posted the comments on Twitter along with a picture of Tuesday’s Daily Mail front page. The newspaper reports that Manchester bomber Salman Abedi was rescued from Libya along with his brother Hashem and around 100 other British citizens following the outbreak of violence in the capital in 2014. All evacuees were taken to Malta before being transferred back to the UK. It is thought the Britons were visiting family in the North African country at the time.

Salman Abedi later detonated a homemade bomb at the Manchester Arena on May 22 last year as people were leaving an Ariana Grande concert. Some 22 people, including seven children, were killed and more than 200 others injured in the blast.

Farage is one of a number of anti-immigration commentators deriding the UK on Twitter for rescuing the then-19 year old Briton from the warzone, while some others despaired of the UK public’s seeming lack of interest in the story relative to other headline-grabbing events in British life. 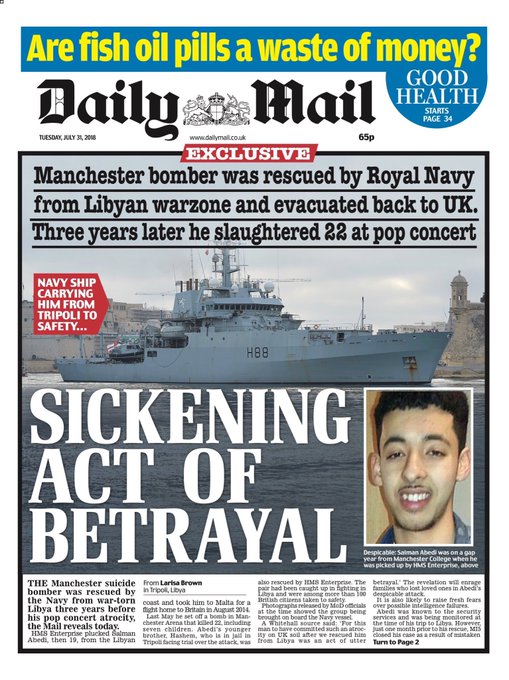 Rescuing Islamists from Libya is really proving to be sensible isn’t it?

This should be top story everywhere in the UK right now.

This is what the left wants more of.

First the Cameron regime helped the Islamists destroy Libya, then helped the two who slaughtered 22 in Manchester get back to Britain. It’s called ‘blowback’ and, as usual, it’s the innocent who pay for the folly and crimes of the elite….http://www.dailymail.co.uk/news/article-6008369/Manchester-bomber-rescued-Royal-Navy-Libyan-warzone-evacuated-Britain.html …

When @DouglasMurray wrote the Strange Death of Europe, I doubt even he thought a government was capable of importing someone who would murder teenage girls directly on UK soil. Manchester Arena bomber Salman Abedi had been rescued in Libya by Royal Navy http://www.itv.com/news/2018-07-30/manchester-arena-bomber-had-been-rescued-by-royal-navy/ …

I set my Twitter Trending to UK to see what the UK is saying about the Manchester Bomber. I found out that the UK is more interested in talking about Love Island and Nutella.

Commentators were quick to hit back at Farage, claiming he was misrepresenting the facts of the story in a bid to bolster his right-wing agenda. Others pointed the finger of blame at former Prime Minister David Cameron for getting Britain embroiled in the Libyan conflict in the first place.

Maybe he was rescued…… because he was British? You chump.

No point in blaming the British Navy for rescuing the Manchester Arena bomber from the Lybian war zone. Blame Cameron and his cabal who helped destroy #Libya and the police and intelligence services that were warned about the bomber but did nothing.

Just a small point
Why was Libya a war zone