How the CIA’s MK-Ultra Ruined Their Lives: Class Action MK-Ultra Lawsuit in Canada

A group of Canadians is fighting back against years of abuse under a secret experimental U.S. program, and it’s not the first time. A Canadian judge compensated 77 former victims of MK-Ultra in 1992. The U.S., whose CIA oversaw the mind-control program, has yet to see a similar suit successfully brought to trial.

Over 40 Canadians are striking back at one of the most notorious covert operations of the 20th century. Calling themselves Survivors Allied Against Government Abuse (SAAGA), the survivors recently gathered in Montreal to publicly share stories of the MK-Ultra abuse that destroyed their lives and their families. Their next step is to bring a class-action lawsuit against Canada’s national government in Ottawa.

As an extension of the CIA-funded MK-Ultra project, AMI doctors used sleeping medications, electroshock therapy, and hallucinogens such as LSD to experiment on unwitting patients. Some of the more troubling allegations consist of patients having been involuntarily sedated into a medically induced coma for weeks as loops of repeated statements or noise played.

Project MK-Ultra was a CIA mind-control program that was operated in conjunction with the Office of Scientific Intelligence and the U.S. Army Biological Warfare Laboratories. The program officially operated from 1953 to 1973, but covert experimentation on the limits of the human mind existed before MK-Ultra and will exist into the future. Though CIA Director Richard Helms ordered all documents on MK-Ultra destroyed in 1973, a Freedom of Information Act request in 1977 uncovered over 20,000 documents that had been destined for eradication. More information was declassified to the public in 2001.

In 1945, Cameron was part of a team that traveled to Germany during the Nuremberg Trials to evaluate Rudolf Hess, deputy führer to Adolf Hitler from 1933 to 1941. Their diagnosis of Hess was hysteria and amnesia, but Cameron’s later analysis of German society was even more troubling, albeit completely fallacious. In his paper “The Social Reorganization of Germany,” Cameron argued for a complete reorganization of German society to prevent what he believed would be another threat to world peace in 30 years.

After the Manhattan Project regarding atomic weapons was revealed in the United States, he argued for the necessity of behavioral scientists to act as social planners in civilized societies. The United Nations, he argued, would then become the conduit by which psychiatric goals could be intertwined with globalism. Society, Cameron believed, should be divided between the “weak” and the “strong.” Those who could not handle the state of the world—as the globalists constructed it—would then be “weak,” while those who accepted its stark realities without rebellion would be “strong.”

Authors such as Naomi Klein have questioned the real reason for the AMI’s MK-Ultra experimentation. She believes that Cameron’s initial work at AMI was not about brainwashing. Instead, it was an effort to develop the art of torture and lay the groundwork for the CIA’s two-step psychological torture method. The focus on drug inducement and electroshock therapy was designed, according to Klein, to extract information from “resistant sources.”

As part of the MK-Ultra project, the United States psychiatric community also experimented widely with the suggestive power of hypnosis, with and without drugs. Richard Condon’s novel The Manchurian Candidate was released at the height of the MK-Ultra operations. It featured a presidential assassination attempt undertaken by a hypnotized, brainwashed subject. Since 1968, speculation has existed as to the role of hypnosis in the life of Sirhan Sirhan, imprisoned for the assassination of Robert F. Kennedy.

To date, a similar class-action suit has not been filed in America. It could be that a similar group exists, carefully monitoring the Canadian case before filing.

Nancy Layton was admitted to Cameron’s care at the age of 18. She suffered from depression. Within six months of being treated by Cameron, Layton developed an acute schizophrenia that had not existed before she had been under Cameron’s care.

“I could not believe this was allowed,” Marlene Levenson, whose aunt was victimized by AMI’s mind-control program, told CTV Montreal. “These were innocent people who went in for mild depression—even if it was severe depression, postpartum, neurological things that happened—they came out completely ravaged and their life was ruined.”

This is not the first such legal case in Canada. In 1992, Justice Minister Kim Campbell compensated 77 former victims of MK-Ultra. Others were denied when they were deemed “not damaged enough.” The empirical level at which someone has to be damaged “enough” by his or her own government has yet to be set. The bar, however, should be low when a government harms the very people it is democratically meant to protect and serve.

S.T. Patrick holds degrees in both journalism and social studies education. He spent ten years as an educator and now hosts the “Midnight Writer News Show.” His email is STPatrickAFP@gmail.com. 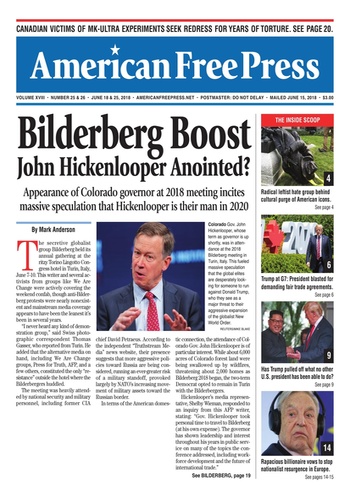