Comment: Stalin was a Satanist and so were the top Bolsheviks.

TUT editor | 05/07/2018 at 9:34 | Categories: Uncategorized | URL: https://wp.me/p2dGk-MMW
FEAR or FAITH? FRIGHT or FLIGHT?
Welcome Eagles to the New Crusade!
Will thou help defend the Fortress of Faith?
BOOKMARK us & check in DAILY for the latest Endtimes News!
SPREAD WORD TO YOUR FRIENDS & FAMILY!

“And I beheld, and heard the voice of one eagle flying through the midst of heaven,
saying with a loud voice: Woe, woe, woe to the inhabitants of the earth….
[Apocalypse (Revelation) 8:13]

Russians were holocausted by Bolshevik Jews

Russians were holocausted by Bolshevik Jews

I am part Russian and will continue to expose the Jews behind the New World Order.  The same tactics and death camps are here in america just waiting to be used.  we know from the apocalypse they will “behead” Christians that is why there were 30,000 guillotines sent to these FEMA camps.  You may ask why beheading?  This is where the “organ harvesting” business comes into play.  It is not conspiracy folks get your head out of the sand.  The Jews are now saying their Messianic Era will start in about 5 years or so hence why I warn you that Antichrist Maitreya is about to arrive onto the scene. 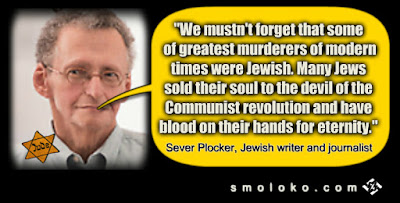 Below is a excerpt from the book, ‘under the sign of the scorpion’ which describes some of the methods of torture and mass murder the Jewish Communists (Bolsheviks) sadistically inflicted onto the Russian Christian people. I warn you, you will be horrified. This is the real holocaust that happened in the 20th century, the Russian Holocaust, carried out by blood-thirsty and demonic bolshevik jews. I highlighted the parts I found to be most gut-wrenching in red.

Here it must be pointed out that the Cheka was under the control of Jews, according to documents now available. Much of this was known already in 1925. The researcher Larseh wrote in his book “The Blood-Lust of Bolshevism” (Wurttemberg, p. 45) that 50 per cent of the Cheka consisted of Jews with Jewish names, 25 per cent were Jews who had taken Russian names. All the chiefs were Jews. Lenin was well informed about all those serious crimes. All of the documents were placed on his desk. Lenin answered: “Put more force into the terror… shoot every tenth person, place all the suspects in concentration camps!” Lenin incarcerated people without any sentence, despite the establishment of revolutionary tribunals, as was the case in France under the Jacobins. Lenin actually claimed that the concentration camps were schools of labour. (Mikhail Heller and Alexander Nekrich, doctors of history, “Utopia in Power”, London, 1986, p. 67.) Lenin also claimed that the factory was the workers’ only school. They did not need any other education. He emphasised that anyone who could only do simple arithmetic could run a factory. Just like the terror of the Jacobins in France, the Jewish Bolshevik functionaries used barges to drown people in. Bela Kun (actually Aaron Kohn) and Roza Zemlyachka (actually Rozalia Zalkind) drowned Russian 110 officers in this way in the Crimea in the autumn of 1920. (Igor Bunich, “The Party’s Gold”, St. Petersburg, 1992, p. 73.)

The unusually cruel Jewish Chekist Mikhail Kedrov (actually Zederbaum) drowned 1092 Russian officers in the White Sea in the spring of 1920. Lenin and his accomplices did not arrest just anyone. They executed those most active in society, the independent thinkers. Lenin gave orders to kill as many students as possible in several towns. The Chekists arrested every youth wearing a school cap. They were liquidated because Lenin believed the coming Russian intellectuals would be a threat to the Soviet regime. (Vladimir Soloukhin, “In the Light of Day”, Moscow 1992, p. 40.) The role of the Russian intellectuals in society was taken over by the Jews. Many students (for example in Yaroslavl) learned quickly and hid their school caps. Afterwards, the Chekists stopped all suspect youths and searched their hair for the stripe of the school cap. If the stripe was found, the youth was killed on the spot.

The author Vladimir Soloukhin revealed that the Chekists were especially interested in handsome boys and pretty girls. These were the first to be killed. It was believed that there would be more intellectuals among attractive people. Attractive youths were therefore killed as a danger to society. No crime as terrible as this has hitherto been described in the history of the world. The terror was co-ordinated by the Chekist functionary Joseph Unschlicht. How did they go about the murders? The Jewish Chekists flavoured murder with various torture methods. In his documentary “The Russia We Lost”, the director Stanislav Govorukhin told how the priesthood in Kherson were crucified. The archbishop Andronnikov in Perm was tortured: his eyes were poked out, his ears and nose were cut off.

In Kharkov the priest Dmitri was undressed. When he tried to make the sign of the cross, a Chekist cut off his right hand. Several sources tell how the Chekists in Kharkov placed the victims in a row and nailed their hands to a table, cut around their wrists with a knife, poured boiling water over the hands and pulled the skin off. This was called “pulling off the glove”. In other places, the victim’s head was placed on an anvil and slowly crushed with a steam hammer. Those due to undergo the same punishment the next day were forced to watch.

The eyes of church dignitaries were poked out, their tongues were cut off and they were buried alive. There were Chekists who used to cut open 111 the stomachs of their victims, following which they pulled out a length of the small intestine and nailed it to a telegraph pole and, with a whip, forced the unlucky victim to run circles around the pole until the whole intestine had been unravelled and the victim died.The bishop of Voronezh was boiled alive in a big pot, after which the monks, with revolvers aimed at their heads, were forced to drink this soup.

Other Chekists crushed the heads of their victims with special headscrews, or drilled them through with dental tools. The upper part of the skull was sawn off and the nearest in line was forced to eat the brain, following which the procedure would be repeated to the end of the line. The Chekists often arrested whole families and tortured the children before the eyes of their parents, and the wives before their husbands. Mikhail Voslensky, a former Soviet functionary, described some of the cruel methods used by the Chekists in his book “Nomenklatura” / “Nomenclature” (Stockholm, 1982, p. 321):

“In Kharkov, people were scalped. In Voronezh, the torture victims were placed in barrels into which nails were hammered so that they stuck out on the inside, upon which the barrels were set rolling. A pentacle (usually a five-pointed star formerly used in magic) was burned into the foreheads of the victims. In Tsaritsyn and Kamyshin, the hands of victims were amputated with a saw. In Poltava and Kremenchug, the victims were impaled. In Odessa, they were roasted alive in ovens or ripped to pieces. In Kiev, the victims were placed in coffins with a decomposing body and buried alive, only to be dug up again after half an hour.” Lenin was dissatisfied with these reports and demanded: “Put more force into the terror!”

All of this happened in the provinces. The reader can try to imagine how people were executed in Moscow. The Russian-Jewish newspaper Yevreyskaya Tribuna stated on the 24th of August 1922 that Lenin had asked the rabbis if they were satisfied with the particularly cruel executions. The Ideological Background of the Terror Compare the crimes mentioned in the previous chapter with the Old Testament account of King David’s massacre of the entire civilian population of an enemy (“thus did he unto all the cities of the children of 112 Ammon”). He “cut them with saws and with harrows of iron” and “made them pass through the brickkiln”. After the Second World War, this text was changed in most European Bibles. Now, many Bibles state that the people were put to work with the tools mentioned and were occupied with brick-making – something the inhabitants had been doing continually for several thousand years already. (This is found in II Samuel, 12:31, and in I Chronicles 20:3.)

The Jewish extremists’ serious crimes in Russia were committed in the true spirit of the Old Testament (King James’ Bible): * The god of the Israelites demands the mass-murder of Gentiles (i.e. goyim = non-Jews), including women and children. (Deuteronomy, 20:16.) * Yahweh wishes to spread terror among the Gentiles (Deuteronomy, 2:25). * Yahweh demands the destruction of other religions (Deuteronomy, 7:5). * The Jews may divide the prey of a great spoil (Isaiah, 33:23). * The Jews may make Gentiles their slaves (Isaiah, 14:2). * Those refusing to serve the Jews shall perish and be utterly wasted (Isaiah, 60:12). * Gentiles shall be forced to eat

Returning to the Bolshevik terror: in order to control the people’s hatred of their Jewish torturers and executioners, people suspected of having an anti-Semitic attitude were also executed. Those in possession of the book “Protocols of the Elders of Zion” were executed on the spot. At the end of March 1919, Lenin was forced to explain: “The Jews are not the enemies of the working classes… they are our friends in the struggle for Socialism.” But the people hated precisely this Socialism and those who practiced terror in its name. Vladimir Ulyanov’s passion was to kill as many people as possible without thinking of the consequences. Of course, he never wondered whether it was really possible to build a state on violence and evil.
Lenin showed the same kind of thoughtlessness by the Yenisei, where he had loaded his boat with so many dead rabbits with crushed heads that it sank under the weight. In August 1991 the state-ship Lenin had launched, sank. What else was to be expected? In the beginning of the 1920s there were already 70 000 prisoners in 300 concentration camps, according to “The Russian Revolution” by 113 Richard Pipes at Harvard University, though in reality there were probably many more. It was in this manner that Lenin built his GULAG archipelago.

do americans face a red terror

the genocide you never hear of

THE VICIOUS JEWISH PARTISANS OF WW2

HELLSTORM: THE RAPE AND MASS MURDER OF GERMAN WOMEN AFTER WWII

Secret Behind Communism –  The Ethnic Origins of the bolshevik revolution

jewish murderers of the russian revolution

The Jewish Butchers Behind Communism

This was my talk with Scottie Spencer from Smoloko.com