The gathering of civil servants and their supporters on Tuesday was initially peaceful, but got heated when some protestors targeted police with stones and fireworks, and broke shop windows.

Police responded with tear gas and water cannons in an attempt to disperse the protestors. At least one man was injured, with his head left bloodied. 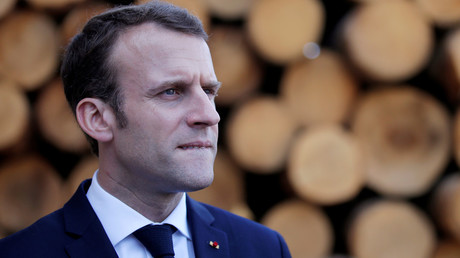 Fall of ‘Jupiter’? Macron’s popularity down, as hopes for the ‘political wonderboy’ seem to vanish

The demonstration was staged by major trade unions to protest such policies as job cuts, wage indexation freeze, and new restrictions on higher education admissions. Apart from the Paris demonstration, trade unions held 140 other protests across the country on Tuesday.

Besides the street protests, Macron’s policies have also caused his approval ratings to plummet following his first year in office. Only around 40 percent of the population supports Macron, while at least 55 percent are “dissatisfied” with his performance, according to recent polls.

Apart from his rather unpopular domestic policies, which have earned him the title “President of the Rich,” Macron’s foreign endeavors have also drawn criticism, including a controversial trip to Africa, as well as taking part in the US-led strikes on Syria based on a questionable pretext.