Will the U.S. Gov’t Kill Me Too? I Like Vladimir Putin…He Has Reinstated Christianity in Russia & Paid Off Russia’s Debt! Pictured Christian Russian Church

Russian President Vladimir Putin has made the final payment on all of the former Soviet republics debts to the world’s central banks – making Russia the only country to set itself free from the tyrannical grip of the New World Order’s banking system.

Rt.com reports: The remaining debt was the money the Soviet Union owed to Yugoslavia. The USSR’s foreign debt was accumulated in various ways. Obligations to Western countries accrued in the debt market after 1983. The money owed to the former Yugoslavia was as a result of trade between the countries.

Initially, it was assumed the USSR’s foreign debt would be paid by all its republics. A document on this was to be signed in December 1991. The bulk of the debt was on Russia (61.34 percent). Ukraine was to repay 16.37 percent, and Belarus was to repay 4.13 percent.

However, Estonia, Latvia, Lithuania, Azerbaijan, Moldova, Turkmenistan, and Uzbekistan did not sign the agreement. As a result, in 1994 Russia took on all the debt in exchange for property all around the former Soviet Union.

When relations with Russia deteriorated in 2014, Kiev threatened to nationalize Russian property within Ukraine. At the time, the Russian Ministry of Foreign Affairs reminded Ukraine it owes $20 billion in Soviet-era debt and if Kiev raises this question, Moscow can demand repayment.

As of 1994, the debt of the old USSR was almost $105 billion. The largest part of this amount (over $47 billion) was to the Paris Club of creditors. It was a pool of 19 creditors, mostly in the West including the US and the UK.

Russia actively began to repay debts under the presidency of Vladimir Putin, which also coincided with a surge in oil prices, giving the country extra foreign currency.

One of the final large Soviet-era debts was repaid last year to Kuwait. Russia paid $1.1 billion and delivered $620 million worth of high-tech products to the country.

Russia forgave debt owed to USSR (My Comment:  Look at the generosity of Russia Below;  They are Second to NONE in generosity!)

At the same time, Russia has written off a large part of the debt developing countries owed it. In 2014, Russia forgave more than $30 billion in debt owed by Cuba, which accounted for 90 percent of the total liabilities. The remaining debt, amounting to $3.5 billion, will be paid off within ten years in 20 equal installments.

In total, Russia has forgiven more than $100 billion in debt owed by developing countries over the past decade.

A forwarded email with photos of a 100 foot structure and says that it is a gift to the U.S. from the people of Russia.  The email says that this is called “The Teardrop” and serves as a memorial to the lives lost in the World Trade Center attack of September 11th.  The email goes on to ask why there was no press coverage.

The “Teardrop” memorial is real and is a 100-foot September 11th sculpture that was donated by the Russian people and is located in New Jersey.

The memorial was dedicated on September 11, 2006 in a ceremony attended by former President Bill Clinton.  Also in attendance were Michael Chertoff, the Bush Adminstration Secretary of the Department of Homeland Security, and family members of World Trade Center victims. Recording artist Leann Rimes sang the National Anthem and Amazing Grace at the dedication ceremony.

Contrary to the claim of the eRumor, the announcement of the intended memorial as well as its dedication did receive nationwide news coverage including a visit to New Jersey on September 15, 2005, by Russian president Vladimir Putin for the groundbreaking ceremony.

Why is it we never heard about this? How is it that Russia can do it but the US hasn’t been able to create an appropriate monument?

Russian gift to the US I had never heard of this before receiving it. Why didn’t the press report it?

This It is the “TEAR DROP” made and installed by the Russians to honor those who died in 9 11 and a statement against terrorism. It is very impressive.. The tear drop is lined up with the Statue of Liberty…

..it is an impressive memorial and statement against terrorism.   Gift from the people of Russia…

“Monument to the struggle against world terrorism, artist Zurab Tesereteii”

The walkway is made of stones.

Names of the persons killed on 9 11 are inscribed on the base.

The base like the Vietnam Memorial wall. It was a cold and windy day but well worth the drive to see.

It is down in the shipping yards across from “The Lady”.

This ad will end in 15 seconds

Russia will help rebuild Christian churches in Syria and establish peace in historically Christian regions of the war-torn country, Russian President Vladimir Putin vowed on Monday during a meeting with representatives of the Russian Orthodox Church.

“Over the past few years the Russian state alongside with the Russian Orthodox Church, as well as other religious organizations, has provided humanitarian aid to Syria,” Putin told the meeting’s attendees, according to Russian state media. “It’s very important that the peaceful life is established as soon as possible, that the people can return to their homes; begin to rebuild the temples and churches.”

During the meeting, Putin also stressed that the conflict in Syria is winding down and much of the territory, including historically Christian areas, has been liberated.

Keep Up With This Story And More By Subscribing Now

“The Syrian armed forces, supported by the Russian military, have liberated from terrorists almost the whole territory of the country, including historic Christian regions,” he said. 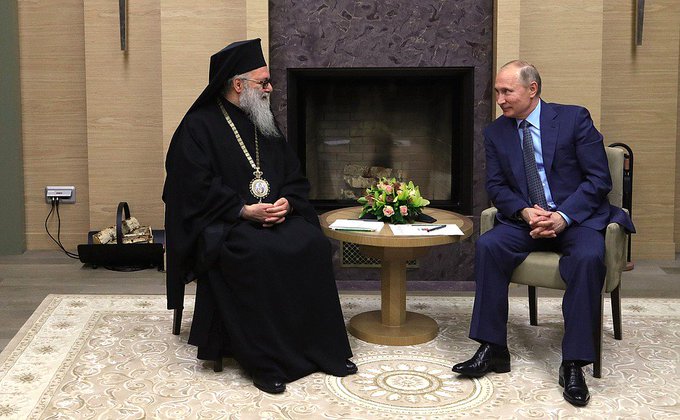 President #Putin meets #Patriarch of #Antioch and all the East #John, discusses situation with rights of Orthodox Christians in #Syria http://goo.gl/qB6xCB

The biggest threat to Syria’s Christian population was the Islamic State militant group (ISIS) and other radical Islamic groups, most of whom have been defeated militarily and driven out of their strongholds in recent months. But it is doubtful that Christians will return to the Syria of President Bashar al-Assad, experts note.

“ISIS and religious persecution has been neutralized. But it’s highly unlikely we’ll see an influx of Christian refugees back into the area,” Benjamin Radd, a Middle East expert at the University of California, told Newsweek.

“The fact is that the country remains unstable and there are no institutions to help them rebuild. So it’s unlikely you’ll see a mass return, they’ll be settled where they are now. These refugees are as good as gone.”

OPINION | Syrian Christians lived in Syria for centuries before Assad but only reached the highest levels of government when Syria was democratic.

Like in Russia, most of Syria’s Christians are Eastern Orthodox, with the largest and oldest group of Syrian Christians belonging to the Greek Orthodox Church.

Despite being a minority in a country of mostly Sunni Muslims, Christians have long belonged to Syria’s elite and have joined prominent political groups. The founder of the Baath Party, which has ruled Syria since the 1960s, was Christian, and Christians held senior positions in the party, government, and security forces over the years.

Aside from his support for Christians, Putin also stressed the importance of rebuilding Jewish and Muslim communities in Syria.

“We will help also the members of other faiths, including Muslims, who, as we are well aware of, have also suffered greatly at the hands of bandits, terrorists and radicals,” Putin said. “We will also help Jews, a number of organizations have already reached us with a call for help in restoration of Judaic holy sites.”

But experts say it is ridiculous for Putin to portray himself as a protector of religious pluralism given Russia’s bombing of religious communities in Syria.

“Putin’s rhetoric may play well among his Christian base abroad, but it’s only going to pour salt in the wounds of the countless Sunni families who have lost loved ones to Russian bombs.”

My Comment:  Russia is helping countries Obama & Clinton destroyed giving them food, medicine and aid.  Love What Russia Under Putin is doing!  Truly the United States is run by the Zionist Synagogue of Satan.  There should be no question in the minds of people who come to this blog. Unfortunately, 85% of the Trump Administration is ZIONIST.  People should be alarmed!