Putin has stated that the Russian troops return from Syria “with victory” as he has visited the Hmeymim base in Latakia for the first time since the launch of the anti-terrorist operation at the request of President Bashar Assad.

Russian President Vladimir Putin has ordered the withdrawal of Russian troops from Syria after over 2 years of an anti-terrorist aerial campaign conducted in the Arab Republic.

“I instruct the Defense Minister, the head of the General Staff to begin the withdrawal of the Russian troop contingents back to the places of their permanent location,” Putin said, when speaking to servicemen in Syria, saying that they have demonstrated “courage, heroism, coordination, determination, brilliant training and high professionalism”.

According to Putin, the work of the Russian Aerospace Forces’ units in Syria has been performed brilliantly and they are “returning home with victory.”

Russian Defense Minister Sergei Shoigu said Monday that the Russian military contingent had already begun to pullout from Syria, but the timetable of the withdrawal would be determined by the situation on the ground.

“It will depend on the situation,” Shoigu told reporters in response to a question on how long it would take for the withdrawal of Russian forces. 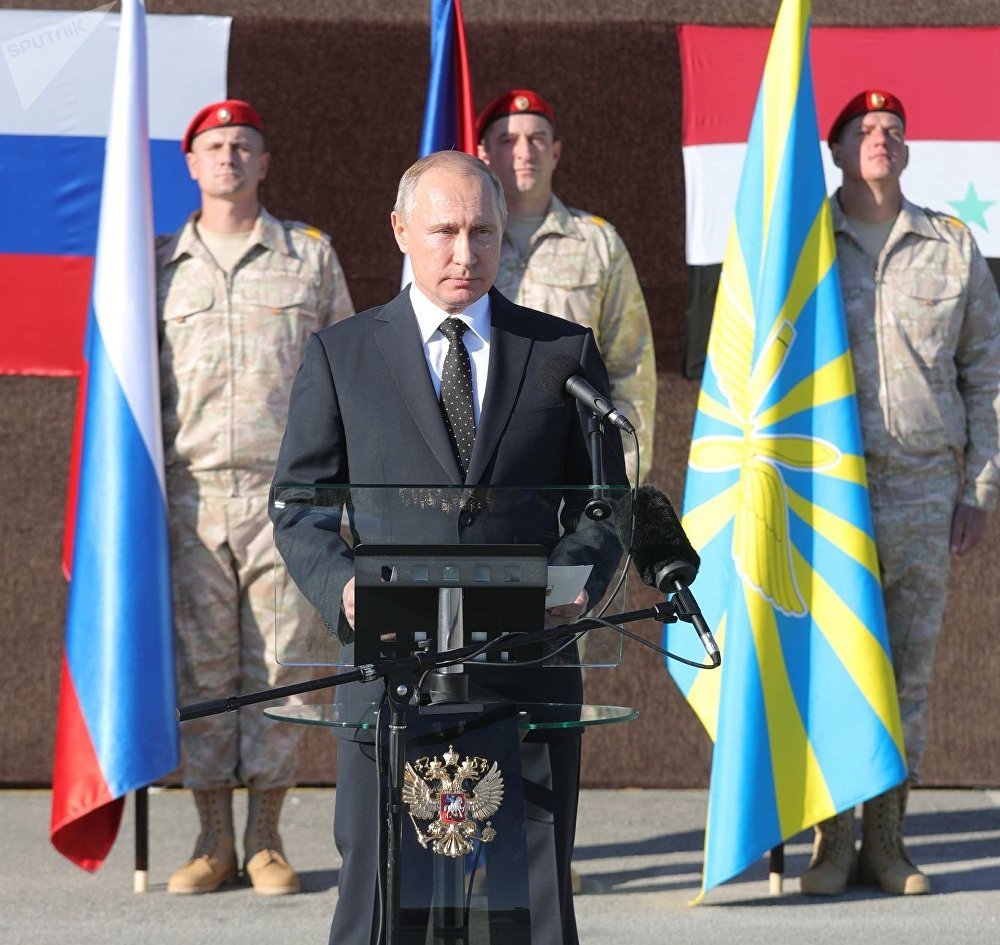 Putin has emphasized that if the terrorists “lift up their head” in Syria, Russian forces will carry out strikes the likes of which “they’ve never seen”, adding that the two bases, in Tartus and Hmeymim, as well as the center for Syrian reconciliation, would continue to operate.

The president has underlined that with the help of Russia’s military operation, Syria has been preserved as an independent and sovereign state, adding that conditions for the political settlement in the country under the auspices of the UN have been created and the refugees, that had to flee their homes, may return.

Vladimir Putin has touched upon the work of Russian defense industry enterprises and armed forces, which demonstrated the growing capabilities of the country’s navy and army, the high-level combat skills of units and divisions.

Putin was met by Syrian President Bashar Assad, Russian Defense Minister Sergei Shoigu, when he arrived at the Hmeymim base in the Latakia province for the first time since the launch of the anti-terrorist operation in the Arab Republic at the request of Damascus in 2015. 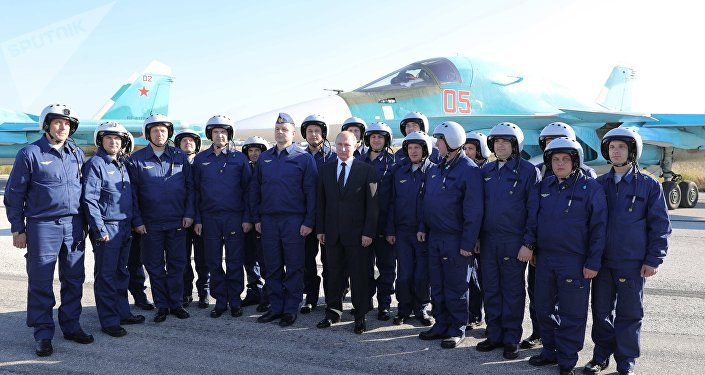 The Russian president has also held a separate meeting with Syrian President Bashar Assad at the base.

“Indeed, the threat of terrorism, in general, is very high. The fact that we defeated one of the main groups — Daesh in Syria — is extremely important for Syria, and for Russia, and for the whole world,” the Russian president told Assad.

For his part, Assad has thanked Russian President Vladimir Putin for the effective assistance in the country’s fight against terrorism.

“The achievements that have taken place are very significant, very important for us. The theme of our meeting, the destruction of Daesh fighters, is very important for the whole world. We coped with this. On behalf of the whole people of the Syrian Arab Republic, I express my deep gratitude for the role your armed forces played. The victories that have been achieved have affected not only our state, but also neighboring countries,” Assad said.

The Syrian people would not forget the Russian servicemen after their blood mingled with the blood of the soldiers of the Syrian Arab army who died in the fight against terrorism, Assad stated, adding “This blood, shed on the Syrian land, confirms that they are stronger than terror, and the memory of the dead of both armies and their courage will be a guiding light for future generations.”

Summarizing the results of the two-year military campaign, Vladimir Putin mentioned other guarator-states of the Syrian peace settlement, namely Iran and Turkey, expressing hope that they would assist in establishing normalcy in the country, contributing to the eradication of terrorism.

The annoucement of Russian President Vladimir Putin has come almost a week after his statement on the complete destruction of the jihadists along both banks of the Euphrates River. Mentioning the continued existence of isolated hotbeds of resistance, Putin said that on the whole, the Syrian and Russian operation in the area has ended with the complete “routing of the terrorists.”

Сommenting on the course of the operation, the Russian General Staff Col. Gen. Sergei Rudskoi stressed that now the terrorist group has been eliminated from Syria, Russian troops will concentrate their efforts on restoring a peaceful life in the country and observing the parties’ resolutions.

© SPUTNIK/
Syria in facts and figures