Only an Israeli Plane Allowed to Fly Out of the Atlanta Airport During the Power Outage! Preferential Treatment for Everything Israeli in US of A! 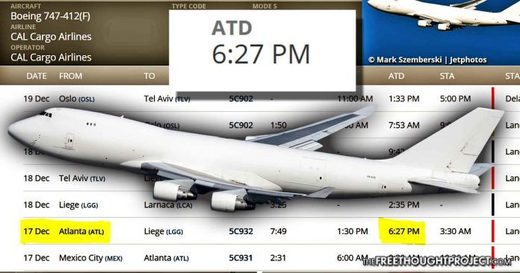 The world’s busiest airport experienced an unprecedented power outage that seemed to defy all of the precautions put in place to prevent it, and during the 11-hour ordeal, internet users noted that only one mysterious plane was allowed to leave the airport (…)  The plane is operated by CAL Cargo Airlines, a Jewish airline company headquartered in Tel Aviv, Israel. Its fleet consists of just three Boeing 747’s and it claims to transport a variety of cargo, including “controlled pharmaceutical and healthcare products, live animals, dangerous goods, oversize and overweight cargo. CONTINUE READING