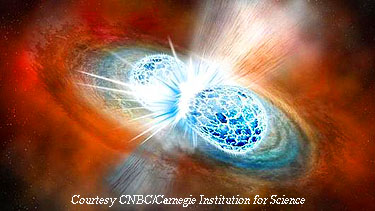 Scientists discover neutron star collisions produce gold–CNBC
“Scientists have detected the collision of two neutron stars for the first time in history, yielding new insights into physics, the structure of the universe, and the origin of elements such as gold and platinum. Researchers from several institutions detected the evidence 130 million light years away on Aug. 17. They announced the discovery Monday….This is the first time researchers have detected light along with gravitational waves. This allowed them to conclude that light and gravitational waves travel at the same speed, something Albert Einstein predicted about a century ago….’This is like a cosmic-scale atom smasher of energies far beyond what humans will ever be capable of building,’ said Andy Howell, a staff scientist at Las Cumbres Observatory/UC Santa Barbara. The discovery also showed that the collisions of neutron stars produce neutron-rich heavy elements, something astronomers had suspected. ‘This result provides definitive evidence for the first time that elements such as platinum, gold, and uranium are actually produced in these collisions,’ Reitze said. Holding up his grandfather’s pocket watch, Reitze said the gold in the watch was ‘very likely’ produced by the collision of two neutron stars.”

Fusion reactor technology for the 21st centwy … cility and the prototype fusion power plants of the future, The major tasks are divided into the following stages: