Petitioning U.S. Department of State and 2 others

National Council of Churches in Korea 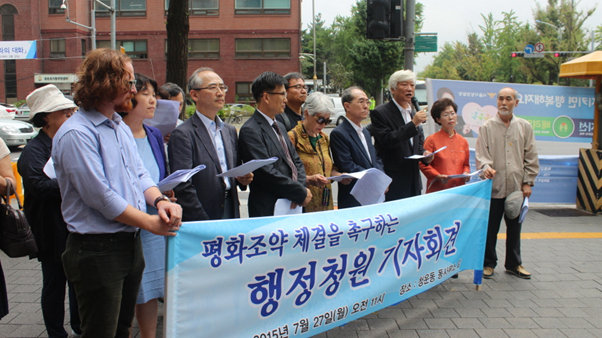 We, friends of the NCCK and NCCCUSA, call on President Trump and Congress to enter negotiations now for a Korean peace treaty to replace the armistice agreement.

This is the longest running and the costliest war in US history. The people of Korea are suffering under conflict and division for over 70 years. Continuing conflict redirects valuable resources away from the welfare of people. US policy has only increased distrust and fear for 70 years.

The US holds a special responsibility for peaceful resolution of the conflict as it occupied the South in 1945 and signed the armistice in 1953. We call on you to build trust by entering negotiations now for a peace treaty to end this war without demanding disarmament as a precondition.

This is the only path that leads to honoring human rights and peaceful resolution of the conflict on the Korean peninsula.

To our supporters: signing this petition is good, but we also know that an electronic signature is not enough. Please also consider writing a letter or email and sending it to the US. You may use a template we provide here.

In 1945 the United States and the Soviet Union divided the Korean peninsula into two competing zones, without the involvement of any Korean authority. This division led to war in 1950. In 1953, the United States signed an armistice agreement, which put a pause to the war with North Korea. Within that armistice document the parties agreed that all foreign troops would be removed from Korean soil and a peace treaty would be imminently signed to end the war. This treaty never materialized and the war has carried on beyond the span of 60 years, now the longest running war in which the US has been involved. The US military still stations about 28,500 troops on Korean soil and another 50,000 in Japan in addition to US military equipment. That means around 78,500 military personnel are stationed right outside the door of North Korea, the largest collection of US military personnel in the world outside of US soil. The US has also set a precedent of pre-emptive invasion with the 2003 invasion of Iraq while naming North Korea alongside Iraq as an equal member in the “axis of evil”. The memory of the immense destruction of bombing raids on the North during the 3 year war has left North Koreans with a deep legitimate fear of the threat just outside its borders which has lasted for more than 60 years. This fear coupled with distrust of US actions during its occupation in 1945-1950 makes it difficult to negotiate terms of a peace treaty based on conditions such as giving up weapons of defense. Therefore demanding such conditions before entering into a peace treaty will only perpetuate distrust and the fear that leads to North Korea’s difficult decisions regarding defense. This continued war also wreaks havoc upon the people on both ends of the Korean peninsula as valuable resources are diverted to means of destruction rather than the welfare of their people. The US has spent tens of billions of dollars on the war in Korea, and the South Korean government still covers 65% of the cost of US military stationed within its borders in addition to its own costs and required military service for young men. The painful experience of the Korean War has taught us that the military solution must not be an option in achieving reunification and peace in the Korean peninsula.

On dialogue with North Korea and Kim Jong Un:
“I would speak to him, I would have no problem speaking to him.”
– Donald Trump – in a Reuters interview May, 2016

Since emerging from the fog of military dictatorship in South Korea in the 1980’s many secular and religious NGO’s including the National Council of Churches in Korea (NCCK) have sought to create bonds of trust with their Korean sisters and brothers across the border. This kind of work seeks to dismantle the dehumanizing enemy images that competing systems rely on to perpetuate the status quo. South Korean president Kim, Dae-jung sought to instill a Sunshine Policy to support building this trust and dismantle conflict such as meetings between separated families, but the US administrations never followed suit leaving only threat and fear in its place. The people of Korea need the people of the US to join in the movement of peaceful reconciliation, dismantling enemy images, and cutting off the cycle of conflict.

We, the NCCK, are a Christian organization creating this petition to add to the momentum of the Statement on Korean Peace and Reunification of the World Council of Churches at its Busan Assembly in 2013, but we also believe that we need the help of others including those who do not affiliate with any religion. So we ask that anyone, including other religions as well as those of no religion who agrees that we must stand together in order to resist dehumanization and militarization, please join us. Negotiations with Iran and Cuba give us a sign of hope, and it is time to ride this wave of peacemaking. President Trump’s policy toward North Korea is still unclear, and we hope it will include a step away from hostile rhetoric toward dialogue as President Nixon opened communication channels with China. Please add your voice to this call for ending the conflict by signing this petition, and then continue to learn more about Koreans working for self-determination, humane relationships, and peace.

National Council of Churches in Korea started this petition with a single signature, and now has 450 supporters. Start a petition today to change something you care about.