Our Gov’t Prefers to Spend Billions of Dollars in Hurricane Damage Rather Than A Fraction of This to Upgrade/Maintain Infrastructure Which Includes Drainage, Pumping Systems, Flood Control, Dams, etc.-ALWAYS TRILLIONS FOR BANKSTERS AND THEIR WARS

A $150 Billion Misfire: How Disaster Modelers Got Irma So Wrong –Bloomberg
“Estimates for the damage Hurricane Irma would inflict on Florida kept mounting as it made its devastating sweep across the Caribbean. It was poised to be the costliest U.S. storm on record. Then something called the Bermuda High intervened and tripped it up. ‘We got very lucky,’ said Jeff Masters, co-founder of Weather Underground in Ann Arbor, Michigan. If Irma had passed 20 miles west of Marco Island instead of striking it on Sunday, ‘the damage would have been astronomical.’….By one estimate, the total cost dropped to about $50 billion Monday from $200 billion over the weekend….Still, when it comes to damage, Irma may bump Andrew…The most recent estimate is for $49.5 billion in Irma costs for Florida; Andrew’s were an inflation-adjusted $47.8 billion. The price tag for Hurricane Harvey, which struck southeastern Texas on Aug. 25, could end up between $65 billion to $75 billion, according to AIR Worldwide, a Verisk Analytics risk modeler based in Boston.” 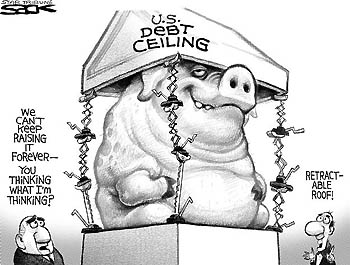 Congress Exploits Hurricane to Raise Debt Ceiling –Paul/Mises
“Former White House Chief of Staff Rahm Emanuel famously counseled politicians to never let a crisis go to waste. Sadly, this week President Trump and congressional leaders of both parties showed that they have taken this advice to heart when they attached a debt ceiling increase and an extension of government spending to the over 15 billion dollars Hurricane Harvey relief bill. This maneuver enabled Congress to avoid a contentious debate over whether to pass a clean debt ceiling increase or to pair it with spending cuts. After all, few members of Congress want to be accused of blocking a bipartisan deal to help those suffering from Harvey over what the media will spin as a ‘right-wing anti-government’ crusade….A refusal to raise the debt ceiling would not cause the government to default; it would simply force Congress to set spending priorities and make real spending cuts. In contrast, raising the debt ceiling allows Congress to continue to run up more debt in order to grow the government. The American people will pay for these deficits either directly through an increase in the income tax and other federal taxes, or indirectly through the inflation tax….At some point, probably sooner than most expect, this continued dollar devaluation will cause a global revolt against the dollar’s world reserve currency status. The result will be an economic crisis that could make the Great Depression seem like a mild downturn….New spending for legitimate emergencies must be paid for with spending cuts.”

Conservatives’ Last Bullet –Bonner/Bonner and Partners
“Today, we have 20 times as much national debt as we did when Reagan came into office. But we have only six times as much GDP. In other words, debt has increased three times faster than output. And today, instead of having debt equal to about 30% of GDP – as we had when Reagan took office – it now equals more than 100% of output. And there are hardly any old-time conservatives left. Year after year, spending increases. Most of it is more or less automatic – driven by aging Americans retiring at the rate of 10,000 per day. Each one costs the government $35,000 a year. Over the next 10 years, spending is scheduled to outstrip tax receipts by about $1 trillion a year. Bankruptcy is practically guaranteed. But conservatives always had one last-ditch weapon…That was the importance of the debt ceiling….The debt ceiling is the one and only thing that might prevent the bankruptcy of the U.S. government. It is the only ammunition fiscal conservatives (the few of them still in Congress) have left. When the going gets tough, Congress could use the debt limit to find its backbone and tighten its belt. That’s why the big spenders and Deep Staters wanted to get rid of it. Mr. Trump may shake things up after all – in a way almost no one expected. He has proposed to take away true conservatives’ last bullet.”

MY COMMENT:  THIS IS THE WAY IT IS WHEN ZIONIST BANKSTERS OWN US SYSTEMS (ALL OF THEM!) VIA THEIR LOBBYISTS.  THEY HAVE RECEIVED 14.4 TRILLION DOLLARS IN THE 2008 BANKSTER BAILOUTS MINIMUM AND GET THE MIDDLE EASTERN WARS THEY WANT SO ROTHSCHILDS AND RUPERT MURDOCH CAN LOOT THESE NATIONS.  US TAXPAYERS PAY THE BILLS OF THESE WARS AND BROKEN SOLDIERS PENSIONS.  IT’S TIME FOR THESE CRIMINALS TO PAY FOR THESE WARS AND REIMBURSE THE TAXPAYERS FOR THE EXPENSES OF THESE BROKEN SOLDIERS.  MAY THEIR ASSETS SHOULD BE SEIZED!