Hey Mainstream Media Where Are You On This Story About Massacred Kids??? This Benefits the Rothschild Khazar Zionists aka Synagogue of Satan! 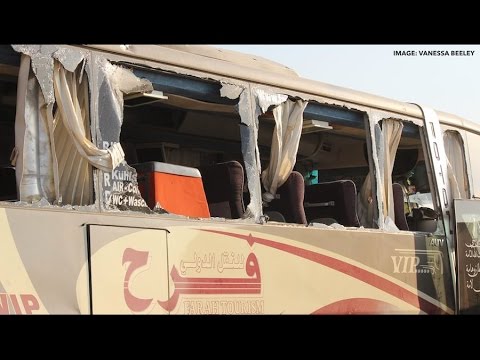 21st Century Wire’s Vanessa Beeley speaks to Mike Robinson about the recent murder of children enticed off a bus with the promise of food. This was the most obscene war crime and brings the conflict in Syria to a new low.

At the centre of it all are Boris Johnson sponsored White Helmets. Please share this video, and with a general election in the UK, ask some hard questions of all prospective MPs.

On April 15th 2017, the people of Kafarya and Foua were attacked, their children mown down deliberately, by a suicide bomb or expolosive detonation, that targeted these innocent children who had been lured to their deaths by NATO and Gulf state terrorists, including Ahrar al Sham and Nusra Front (Al Qaeda). Mothers had to watch from behind the windows of the buses they had been imprisoned in for 48 hours, while strangers, terrorists, picked up their children, their wounded, bleeding, mutilated children, and piled them up in the backs of trucks and Turkish ambulances before driving them away from the horrific scene and stealing them from their distraught, powerless mothers. 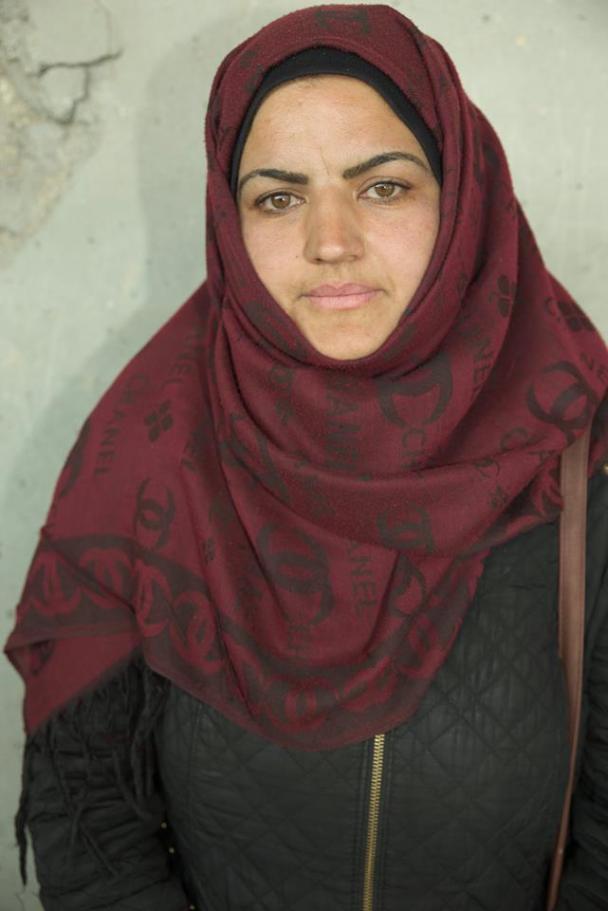 “This is Zeinab, she was forced to watch the massacre of 116 children through the windows of a bus while the NATO and Gulf state terrorists, collected the dead, dying and mutilated bodies of her community’s children and flung them in the back of trucks and Turkish ambulances, before driving them to Turkey. She has 10 members of her family still missing. She has no idea where they are.

She gave her courageous and emotional testimony to us in Jebrin registration centre, where the survivors of the 15th April, suicide bomb attack, were taken for shelter after this horrific event, described by CNN as a “hiccup”.

I speak about part of her testimony with RT yesterday who also used my interviews in their news feed. Unlike corporate media, RT investigate these atrocities and honour the voices of the Syrian people.

The Telegraph edited out this appalling and callous phrasing immediately after the RT interview.

The Telegraph described the dead Syrian babies as “Syrian Government supporters” in an attempt to whitewash the UK Regime terrorist crimes by proxy and to erase the existence of these innocent children from our consciousness..by the familiar dehumanization process that we have witnessed every time the various NATO and Gulf state extremist carry out mass murder of Syrian civilians.” ~ Vanessa Beeley 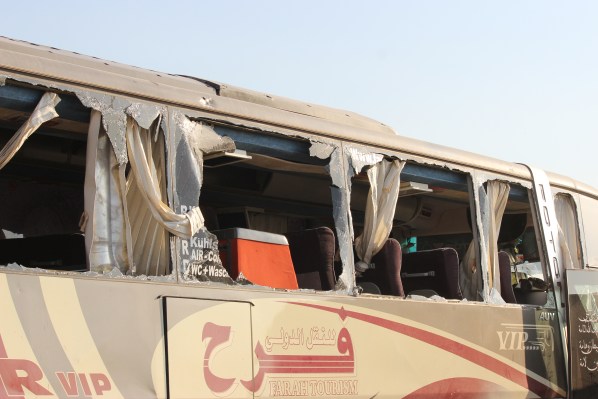 Bombed out remains of one of the buses that had been carrying evacuated civilians from Kafarya and Foua to Rashideen holding centre. (Photo: Vanessa Beeley)

Vanessa Beeley, associate editor at 21st Century Wire, was present at the scene and provided video footage of the witness and survivor testimony to RT for use in the news section. She also spoke to RT about the heartbreaking accounts given to her by Zeinab, a mother, from these besieged Idlib villages of Kafarya and Foua, who had seen the carnage and who still has 10 missing relatives, who were taken to Turkey by the waiting ambulances.  A full report, and subtitled video will follow shortly, when internet and time allows, but for now, here is the report from RT and the interview at the end of the report.

Terrorists lured evacuees out of buses with snacks before blast – Aleppo attack witnesses:

Eyewitnesses to the bomb attack on a refugee convoy near Aleppo that killed dozens of children said the militants lured people out of the vehicles with snacks before the explosion, and also stopped them from escaping the blast site.

Following the attack, Vanessa Beeley of the 21st Century Wire website gathered first-hand accounts from those who survived the assault. People told her that the militants did their utmost to increase the death toll. The exclusive videos she provided to RT shed more light on the incident.

“Just before the explosion, a strange car got from the militants’ checkpoint. They said they were bringing snacks for children,” the bus driver who was in the convoy said.

The driver said the militants knew for sure that the children “haven’t seen biscuits and crisps for so long” as they were under siege. “People have been stuck in buses for 48 hours as the rebels didn’t let us out,” he noted. A woman said that she and other evacuees were held in the buses “like prisoners,” adding that they were only allowed to get out and stretch 10 minutes before the explosion.

Many people, including children, left the buses and approached the car when the blast hit the convoy.

One of evacuees said that the militants “were throwing potato chips on the site of the future blast. One of the terrorists said that it was food for the infidels.”

The driver recalled that “there were Ahrar ash-Sham and Jabhat al-Nusra [Al-Nusra Front], and some factions of the Free Syrian Army [FSA]…”

According to another witness, “the Ahrar ash-Sham fighters didn’t hide their faces, while Jabhat al-Nusra were always wearing masks. One could only see their eyes,” one of the eyewitnesses said.

WARNING:Graphic and distressing footage from the attack ~

There were many foreigners among the terrorists – “Uzbeks, Turks, people from Chechnya, Saudis and Qataris. One could judge on their appearance; their language,” another evacuee added.

“When the blast rocked the area, people rushed into the woods but militants surrounded them and forced back to the buses,” the bus driver said.

A female evacuee recalled that “the militants told us that terrorists from another group were shelling our buses and that we must flee towards the bushes… but then they said that the bushes were mined and found ourselves trapped.”

Another woman also told Beeley that even before the explosion, four yellow Turkish ambulances were present at the scene for some reason. After the blast, the ambulances started picking up the dead and injured, only to take them to an unknown location.

“We don’t know where they [the children] are. They’re gone. There are no bodies. We’ve searched for them, but with no result,” one of the witnesses said.

Many relatives of those missing still know nothing of their whereabouts, other witnesses said. Some people told Beeley that the controversial White Helmets were also seen at the blast site, retrieving bodies of Al-Nusra and Ahrar al-Sham militants, but apparently leaving injured civilians.

Beeley, who has consistently covered the Syrian war, also filmed people’s testimonies about their escape from the rebel-held areas. The evacuees boarded the buses on Friday in the Rashideen neighborhood of Aleppo, but were not allowed out of the vehicles for nearly three days.

Many of them, however, were happy to leave as “this place turned into a terrorists’ hotbed,” one woman said.

[Some] international organizations have already condemned the attack on the humanitarian convoy in the strongest terms.

“We must draw from this not only anger, but renewed determination to reach all the innocent children throughout Syria with help and comfort,” said UNICEF’s executive director, Anthony Lake.

“And draw from it also the hope that all those with the heart and the power to end this war will do so.”

However, Beeley told RT that not many in the West followed the UN’s example in decrying the attack.

“We’ve just witnessed one of the most heinous crimes of our lifetime, and yet corporate… there’s no international condemnation from governments, from NGOs, from the media,” she said.

On the contrary, the media is making an attempt to “whitewash this utterly abhorrent” incident, in which, according to Beeley’s information, 116 children lost their lives. 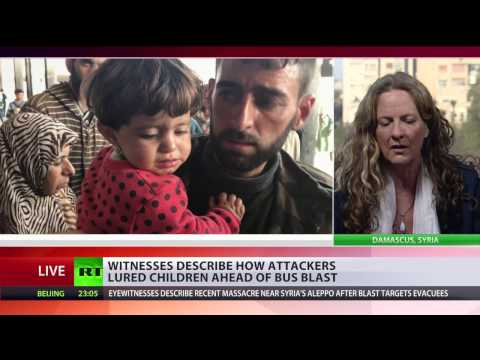