Donald Trump’s pick to be the next Secretary of State is making Jewish groups very nervous. 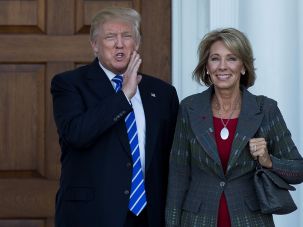 A lifelong Exxon Mobil executive, Tillerson has no public service background, and no public track record on Israel-related issues. He has close ties to the Russian government.

Jewish leaders said that Tillerson’s opposition to sanctions, his relationship with Russian president Vladimir Putin and the general oil industry bias towards Arab states all made them anxious about the Tillerson nomination.

Even Trump fans, like Zionist Organization of America president Mort Klein, expressed displeasure with the notion of Tillerson running the State Department. “In general, people who have led oil companies are not that friendly to Israel,” Klein said. “That concerns me.”

Klein added that he had confidence in Trump to choose well.

Klein and others voiced general suspicion of oil executives, who they said often have longstanding relationships with Arab leaders, and are generally not attuned to Israeli interests.

Halber noted that Tillerson, in his time at Exxon, is said to have opposed the practice of the U.S. using economic sanctions as a diplomatic cudgel.  (Folks this is good!-Admin)

“It seems kind of odd,” said Halber, that “when [Trump] has made one of his main foreign policy objectives to roll back any potential for an Iranian nuclear weapons acquisition, he would make as his Secretary of State a person who doesn’t support the very tool that brought the Iranians to the table.”

Ron Klein, a former Democratic Congressman from Florida who led a pro-Hillary Clinton Super PAC, said that Tillerson’s Russia ties were a chief concern.  (Admin:  No Cause for Concern-We need to Work With Russia For Economic Reasons.)

“Russia is not necessarily a friend to the U.S.,” Klein said. “If Tillerson and the president, who he takes his direct orders from, both have a special place in their hearts for Putin, then I think there is and there should be a lot of bells ringing that this could be a problem for U.S. interests, and Israeli interests as well.”  (Klein is lying here;  Russia has been our Ally many times in history.)

The left-wing pro-Israel group J Street focused in its statement, released late Monday, not on Tillerson but instead on the report that former U.S. Ambassador to the United Nations John Bolton could be nominated as Tillerson’s deputy.

“Bolton’s long track-record shows to him to be hostile to the notion of diplomacy itself,” said the group’s president, Jeremy Ben-Ami, in a statement. “He is an unabashed advocate for premature, unnecessary and dangerous use of military force in the Middle East and around the globe.”  (Bolton, Zionist is very bad news indeed. Admin)