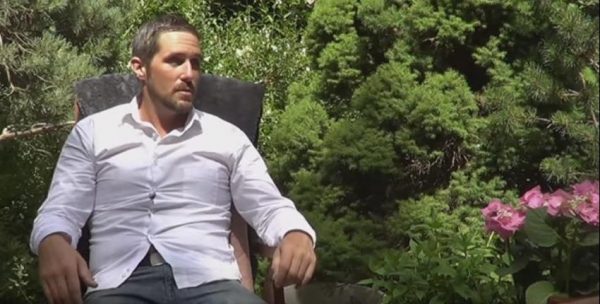 A truly bizarre story has recently made the rounds of British tabloids and a variety of worldwide news media outlets, regarding the unexplained death of conspiracy theorist and Ufologist Max Spiers. According to several sources, Spiers, 39, who was from Canterbury, was found dead this summer on a couch in Warsaw, Poland. Spiers’ mother, Vanessa Bates, 63, told the press that her son had been staying with a woman he had barely known.

The Daily Mail reported: “Max worked with the supernatural and conspiracy theory group Bases Project and was due to appear at a conference held [in] Wiltshire in August.”

In Warsaw, it seemed that Spiers was engaged with the Polish conspiracy contingent. A story from the Independent hosted a YouTube video clip of what was to be the British conspiracy theorist’s final interview. In the conversation with a Polish YouTube channel, Spiers speculated on the Fourth Reich and its collaborative efforts between Nazis and Zionists, “after a war stretching back 50,000 years.”

His final suggestion in the interview was the implementation of a “New World Order” between the two groups whom he alleged had been working together.

According to his mother, his final message to her was: “Your boy’s in trouble. If anything happens to me, investigate.” Which is exactly what the Foreign Office of the UK stated that they wouldn’t be doing, months after the unexplained death.

Polish authorities ruled that the death was from natural causes. Friends alleged that he had been vomiting “black liquid.” That was never considered by officials.

In town for various speeches and interviews, Max Spiers’ final public conversation also conspiratorially theorized on a “secret underground alien base in New Mexico.” He claimed that he had witnessed the inside of such a facility, and that in it “children were being used for their ‘pure energy.’”

“I have seen a vat of children in disassociated states, some crying, some not and some completely gone. They also have female breeders down there constantly breeding children, thousands of them.”

“Although his theories appear farfetched, many of Mr Spiers [sic] online followers believe he may have been murdered because of his investigations.”

Max was seemingly involved not just in investigating UFO sightings, but he was also alleged to have been looking into massive government cover-ups stretching back decades.

“Now it has emerged that Spiers was inquiring about allegations of widespread sexual abuse against children that was committed at a military base in California by employees acting under the influence of a satanic cult.

In 1987, the US Army demolished a child care center at its Presidio base in Northern California, just one year after as many as 60 children were sexually abused there, according to the Associated Press.

One civilian employee of the center, Gary Willard Hambright, was indicted for molesting 10 children, though charges against him were ultimately dropped.

One US Army officer at the base, Lt. Col. Michael Aquino, was alleged to have taken part in the abuse, according to The San Jose Mercury News.

Aquino was known as the self-confessed founder of a Satanic movement known as The Temple of Set.

Despite rumors of his involvement and a police investigation, he was never charged.

In subsequent investigations, it was determined that a number of children exhibited signs of being victimized, including four who had contracted sexually transmitted diseases.

Spiers was looking into the Presidio affair and Aquino’s role, which he believed to be part of a larger underground movement that entailed ritual sexual abuse of children in San Francisco in the late 1980s, according to the UK Daily Express.

Shortly before his death, Spiers told Polish YouTube channel PorozmawiajmyTV that he was digging into the story and that his life may be in danger as a result.”

Whether his speculations on other-worldly pseudoscience are utterly outrageous or wildly accurate remains a mystery, much like his death. However, Spiers ended up being right about one thing.

Sarah Adams, 31, his fiancee, spoke with the Evening Standard about Max’s unexplained death.

“‘We were used to getting death threats or stuff like that from people but I think this time it seemed rather real.

‘He’d been sent threats saying that him and me were going to die.

‘We had both been due to go to a conference to speak about it.’

She said: ‘He planned on coming back here seeing his family and I was going to have his child. He had messaged me hours before.

‘He sounded fine and he wanted to see me and come back here to England.

Ms. Bates spoke publicly about what she felt remained an unsolved mystery surrounding her son’s death, saying that he had been experiencing migraines and was taking antibiotics up until the day of his death. He had even cancelled an interview around that time and was reported to have been complaining on social media of being “way too tired.”

From a Yahoo! News affiliate out of Australia:

“The father of two was ruled to have died of natural causes, however his mother claims there was no post-mortem examination carried out on his body in Poland.

Ms Bates told Daily Mail she felt her son could have been poisoned by occultists who he had come into contact with during his paranormal research.

In the days before he died Spiers was filmed slurring his speech and struggling to put sentences together.

His mother believes this was evidence of him being drugged.

She claimed she heard ‘satanic rituals’ being carried out over her son’s body, while she spoke with his housemate on the phone.

‘There were strange suggestions of things that should be done like put milk by this side and get garlic and put flowers and put vinegar and very weird goings on,’ she told The Mail.

‘I could hear it being said. It sounded like rituals going on. Some sort of satanic rituals.

‘I think Max had been digging in some dark places and I fear that somebody wanted him dead,’ she said.

She claimed she was sent a ‘threatening’ book on Satan worship by a Polish woman that her son was reportedly staying with before he died.

The same woman also allegedly sent her a photograph of her son with a head wound and another of him in a coffin.”

Max Spiers’ unexplained death left behind a sister, a brother, and two sons. A coroner’s office from North East Kent told the press that the investigation into his death was in its early stages.

To raise funds for a headstone and memorial service for friends, which is yet to occur in Canterbury, a GoFundMe site is available for donations, as of the previous week.

Additional sources for this story:

Bryan William Myers
Bryan is a freelance writer/copy editor/copywriter. He reads, researches and drinks beer. He also writes poetry, short stories, essays, and is working on various novels, some of which include private documentation of traveling and living in Philadelphia, Colorado, and New Jersey. Currently, he lives in South Philadelphia. He also paints and records his own music.