By James M. Carrillo
The overinflated, propped up stock market bull may well be over. Long term market analysis has signaled that a long term sell off could be ahead of us. It sure makes sense to reduce stock market exposure for the ride down. I recommend moving to cash, cash equivalents and gold.This is the first major long term stock sell signal I have issued since I warned investors back on Monday, January 21, 2008: Stock Market has broken, we are in for a rough ride!!

We had a very short time to prepare in 2008. It appears the preparation period may be even shorter this time. The stock market momentum has now officially reversed course, signaling the beginning of a long term down trend; if not a full-fledged crash.

In 2008 the market went on to lose over 60% of its value. Many large corporations and financial institutions went bankrupt overnight! If not for tax payer bailouts, the entire financial system would have imploded.

Key Factors that could make this far worse than 2008 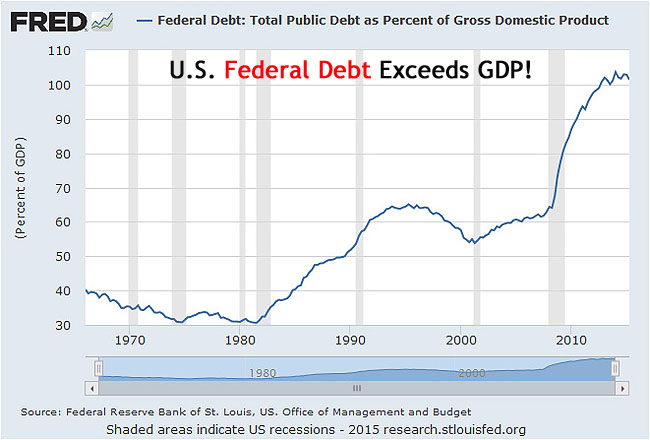 All while only 56% of the population supports this record government spending! How long can this charade continue? What would a collapse in the stock market mean for the record revenues the government is collecting on the backs of only half of Americans?

Since 2010 the U.S. monetary base has increased by over 410%. This means our buying power could easily, by historical measure, decline as much as 75% over the mid to long term.

There will likely be another Lehman Brothers out there. As in 2008, there will be no warning of the collapse. Tax payer bailouts are now outlawed with the signing of Dodd-Frank bill. No more bailouts could mean an initial collapse of our banks that would trigger “bail-in” scenarios, restricting access to our deposits. FDIC/BOE Report (pdf)

In 2008 we had the ability to lower rates to ZERO in the hopes of stimulating some growth and allowing banks to borrow from the Fed at a 0% interest rate. Because rates have still not risen, the Fed won’t be able to ease rates this time.

We could be on the verge of witnessing negative yields. Can you imagine being forced to pay the banks to hold your money? That is in fact currently happening in the Eurozone. 25% of all Eurozone government debt yields negative rates. Both Swedish and Danish banks currently only offer negative rates.

The perceived safe haven “U.S. dollar” is in the midst of a major currency war with China and our own President and Secretary of State have warned of the potential loss of our “reserve currency status”

Our bonds are being mocked by even the most sophisticated investors as lousy investments that could soon be illiquid.

As this goes to press, Russia just started bombing Syria and we launched a bombing campaign in Afghanistan. The world appears to be in disarray, and this too is historically common when world finances spin out of control.

But what can you do? Side with history. Buy Physical Gold!

I see gold prices potentially skyrocketing to levels nobody can fathom. Why? It has no debts and no third party liabilities. Every other asset is reliant on availability to credit and credit worthiness. Credit could freeze up overnight like it did in 2008 but this time with no way out. I fully expect QE4 to end in a complete loss of public confidence.

I highly suggest you quickly buy yourself some peace of mind by adding wealth insurance today. Buy and hold gold, it has proven itself throughout history as a safe haven in an uncertain world.

My Comment:  You could also stock up on about a month’s supply of food (dehydrated or canned), stock up on silver, copper, paladium, etc.  IF YOU CLICK ON FDIC/BOE REPORT (PDF) THE FIRST THING YOU NOTICE IS THAT THE BANK OF ENGLAND IS WORKING IN TANDEM WITH THE FDIC TO DETERMINE OUR BANKING POLICIES….WHY SHOULD THE BANK OF ENGLAND DETERMINE OUR BANKING POLICIES??????  CLEARLY THE US IS NOT INDEPENDENT AND SOVEREIGN OF ENGLAND…ACTUALLY THE US IS A CORPORATION CONTROLLED BY ENGLAND AND WE LOST OUR SOVEREIGNTY A LONG TIME AGO…HAVE OUR HISTORY BOOKS LIED???  YES, A RESOUNDING Y—EEEE—-SSSSS!!!!!!!!!!11