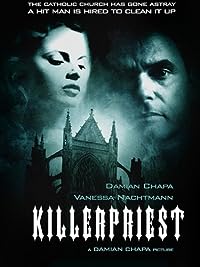 Format: Amazon Instant Video
This is the only film that I have ever seen that actually explores the MK ultra mind control aspect of the CIA and thier Satanic explotation of its own USA citizens. I think its not a big budget however It really is a couragous film that shows the viewer aspects about the American Govermnent and the Vatican that many are not aware of. Do not watch this film with Children its very intense and way to much for kids.
Description:  The main character is Joseph, a hit man played by Damian Chapa. He is hired secretly by a religious group, that wants to get rid of corrupt priests who have allegiances with secret societies of satanic and illuminati origin.
My comment:  I highly recommend watching this film:  the MKUltra tortures are real and well documented, the killings resulting from these tortures are murder and unprosecuted.  These are horrific crimes against these victims perpetrated mainly by Canada and the United States-“free” countries if you consider Nazi’s as promoting and supporting “freedom.”