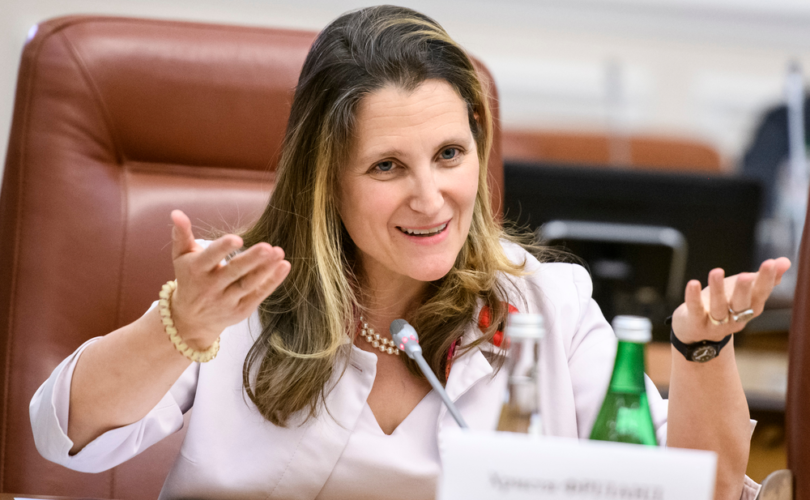 Chrystia Freeland during a visit to Kyiv, Ukraine in 2019.Shutterstock

Comment:  Banksters Parasite off of your money.  They charge Illegal Interest or what IS ILLEGAL in Muslim Countries.  They Commit USURY which is a crime.  These Criminals control the U.S. as part of the British Empire.  She is Jewish and is working towards a Jew World Order where only the Jews will not be slaves.  Take a Look:

My family and I joined Jewish communities in Canada and around the world celebrating the Passover story of the Jewish people’s journey to freedom. Chag Pesach Sameach!

OTTAWA (LifeSiteNews) — During testimony before the Public Order Emergency Commission last Thursday, it was revealed that one Canadian bank executive suggested Freedom Convoy protesters could be labeled as “terrorists” to allow for a quick freezing of their funds, while another banker took the opposite position and cautioned against politicizing banks.

The revelations came about during Deputy Prime Minister and Finance Minister Chrystia Freeland’s testimony before the commission, and was sourced from a heavily redacted readout of conversations between her and Canadian banking CEOs on February 13, the day before Prime Minister Justin Trudeau invoked the Emergencies Act (EA).

“I am told this is a public safety lead, but if you list them as people subject to sanctions (as if they are terrorists) we could act swiftly,” one banker said to Freeland.

Freeland’s handwritten notes from her conversation with the banking CEOs show that while speaking to them, she had written, “you need to designate the group as terrorists.”

On the same call, however, one banking executive warned about using Canada’s financial institutions for political means.

“I am very concerned about seeing the banking system being used as a political weapon of the government. We can’t politicize the banks,” the one banker told Freeland.

Freeland then asked the banker to “explain” what they meant.

“If we are directed to close accounts, that could be seen by critics as the sector being used as an arm of the government,” replied the banker.

The banker then said that the federal government should begin to think about lifting COVID mandates and that it should show a plan to do so.

The following day, Freeland mandated certain bank accounts be frozen under the EA. In total, almost $8 million in funds from 267 people were frozen. 170 bitcoin wallets were also frozen.

At the time, Freeland noted to reporters that banks and credit unions would be able “to immediately freeze or suspend an account without a court order.”

She also said the financial institutions would “be protected against civil liability.”

Recent notes show Freeland told fellow cabinet members that Freedom Convoy supporters whose bank accounts were frozen under the EA would not be able to access their funds until they first reported to police.

During her testimony Thursday, Freeland defended the decision to freeze bank accounts despite the massive public backlash.

“I would have preferred not to have had to do this. But in my mind, I weigh that against what I really believe is the tens, hundreds of thousands of Canadian jobs and families that we protected,” said Freeland.

She then said that she feared the protest would turn violent, which did not happen.

“I felt that Canada was sort of a powder keg.”

Freeland agreed with one banker’s call for possible military intervention

During the February 13 teleconference with Canadian banking CEOs, Freeland said that she “couldn’t agree more” with one banker’s recommendation that the Canadian Armed Forces (CAF) be used to stop the Freedom Convoy.

According to Blacklock’s Reporter, the banker said that “Canada’s reputation is at risk” and that something needed to be done to “show the world proactively we won’t let this happen again.”

“We should think about putting the military in place to keep the border crossings moving even after the protesters are removed to send a clear signal,” said the unnamed banker.

Freeland in response said she “couldn’t agree more with those points,” adding that the government “must make clear that one, we will resolve this, and two, we won’t let this happen again.”

During testimony at the Public Order Emergency Commission, it was also revealed that Canada’s Justice Minister and Attorney General David Lametti, and Public Safety Minister Marco Mendicino, made jokes about using “tanks” to stop the Freedom Convoy.

When asked about her remarks, Freeland claimed that her words were not meant in a literal sense, adding she would not have used armed military troops against the Freedom Convoy.

“We were operating in the fog of war,” said Freeland.

While Canadian Prime Minister Justin Trudeau ultimately revoked the EA on February 23, the ability for the government to direct banks to freeze the accounts of citizens without a court order led to immense backlash by civil rights groups and others.

Last Friday, Trudeau, while testifying before the commission, admitted that the Freedom Convoy was not violent but insisted the EA was needed.

He also denied calling “unvaccinated” Canadians names, despite referring to the vaccine-free as “misogynists” and “racists” who deny science just last year.

The hearings into Trudeau’s unprecedented use of the EA to crush the Freedom Convoy began on October 13 and concluded last Friday.

The Public Order Emergency Commission will begin a pubic policy phase to recommend potential amendments to existing legislation related to the Freedom Convoy this week, a process that includes round-tables of “experts.”