The Falling House of Cards-USSA

Turmoil at Home, Turmoil Abroad: Israel and the U.S. Escalate Their War Against Iran

Comment: SANCTIONS are War Crimes which the U.S. has committed uncountable times causing starvation of infants and children. Pictured is a starving infant. Frankly the United States military represents the ZIONIST criminals who run our country into the ground. Military message: Stand Down! Quit Representing Criminals. Feature picture is the Synagogue of Satan who we actually represent. Any Wonder the Whole World Hates Us? Who can blame them? I sure don’t.

ABC NewsFather mourns baby who died of starvation in Yemen – ABC NewsImages may be subject to copyright. Learn MoreRelated images 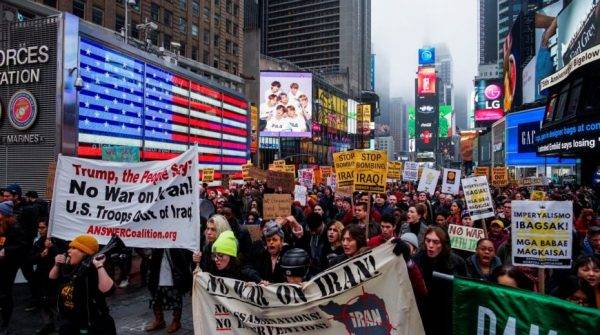 People march as they take part in an anti-war protest amid increased tensions between the United States and Iran at Times Square in New York, U.S., January 4, 2020. REUTERS/Eduardo Munoz – RC279E98P2J3

As the combined impact of the corona virus and the wholesale destruction of America’s history and culture, or at least the part of it that is white, continues, it is nice to see that other nations are getting into the game that will lead to the de facto elimination of western civilization. No one is yet quite up the U.S. level of senseless destruction and looting by the heroes of Black Lives Matter (BLM) and Antifa, but in Britain mobs are beating policemen, statues including that of Winston Churchill are being attacked and the Cenotaph commemorating the country’s war dead has been vandalized. In a bizarre incident demonstrating the fundamental ignorance of the wreckers, a memorial to those who died at the 1651 Battle of Worcester in the English Civil War has suffered “significant damage”, with the letters BLM painted on the marker.

Perhaps the most ridiculous SJW demand arising out of the ethno-racism nonsense that has induced the politicians and journalists to go down on their knees and beg for forgiveness is the argument that the Arch of Titus in Rome, which has been standing for two thousand years, should be destroyed because one of its panels depicts the triumphal parade that displayed the loot obtained from the Roman capture of Jerusalem in 70 A.D. Yeshiva University senior Michael Weiner writing in the Jewish magazine “The Forward” argues that “…like Columbus, Robert E. Lee, and King Leopold II, it too must come down. There is no excuse for Italy to maintain, fund, and proudly display a structure that celebrates the destruction of Jerusalem, the forced displacement of the Jews of Judea, and the burning of the Temple… As an ancient propaganda tool to glorify Rome’s bloody conquests and a modern emblem of Christian persecution and Jewish subjugation, the Arch of Titus is a cruel symbol.”

Weiner seems unaware, or more likely does not care, that there is considerable irony in his denunciation of the Roman subjugation of Judea while ignoring the very real contemporary genocide of the Palestinian people by his co-religionists in Israel. It just goes to show you that once the destruction game starts, anyone who has a grievance can join in and the damage will increase exponentially as every foolish demand becomes self-justifying.

If the current political turmoil ever reverts to anything like normalcy, what is likely to emerge out the other end is a coalition of grievance groups that have figured out that destroying things indiscriminately to make some people feel consumed with guilt so you can steal their money and property is a whole lot easier than actually having to come up with something reasonable. Whatever it winds up calling itself the “NewPolitics” will look a lot like Nancy Pelosi’s groveling Democratic Party or possibly Britain’s Labour Party under its new dystopian leader Keir Starmer, whose overriding mission appears to be ridding the world of anti-Semitism.

Be that as it may, and assuming that the world will not end in the next year or so, the distraction arising from the virus and demonstrations has provided plenty of opportunity for the Trump Administration’s consigliere Mike Pompeo and his foreign allies to make mischief all around the world. Indeed, there have been opportunities for several “twofers” with condemnation of China’s and Venezuela’s relations with Iran permitting attacks on multiple “enemies” simultaneously.

China is completing a “New Silk Road” trade agreement with Iran that will reduce the impact of U.S. sanctions while Iran has been supplying refined petroleum products to Venezuela. Washington has been working hard to disrupt both developments, even threatening to use counter-terrorism legislation to intercept the Greek-owned but carrying-Iranian-fuel tankers in international waters.

The real question all along has been whether the United States and Israel will attack Iran now or later, but the usual anonymous sources in Washington that provide the New York Times with fodder for its fabricated foreign policy pieces are now suggesting that we are looking at something that might be called “incremental conflict management”, which would consist of a series of “short-of-war clandestine strikes, aimed at taking out the most prominent generals of the Islamic Revolutionary Guards Corps and setting back Iran’s nuclear facilities.”

Brian H. Hook, the State Department’s special envoy for Iran described the U.S. government’s vapid Iran policy by observing “We have seen historically that timidity and weakness invites more Iranian aggression.” Also, in an election year, “incremental” sounds better than real war and it also obscures the reality that Israel is already attacking Iran and its allies, almost daily, aided by the Trump Administration and also encouraged by a belligerent U.S. Congress.

The U.S. approach to Iran is only marginally more subtle than that of the Jewish state, consisting of seeking to destroy the country’s economy by blocking its oil exports and its banking sector. Last week a U.S. court in Washington cited “anti-terror legislation” to rule against Iran, awarding $879 million in damages to the survivors and families of the U.S. airmen killed in the Khobar Towers bombing attack in 1996. Iran has denied involvement in the bombing and there is certainly no hard evidence that it was behind it, but the victims will in any event have a hard time collecting their money as the Iranian government has had many of its bank accounts frozen by the U.S. Treasury.

The “incremental war” crowd sees a situation in which the United States and Israel have de facto been pursuing a plan to bring down the Iranian government while also devastating its nuclear program. The United States is applying the economic pressure through an increasing use of sanctions, while Israel regularly bombs Iranians and Iranian proxies in Syria and Lebanon. The two governments believe that the combination of military force and economic sanctions will eventually force the Iranian regime to basically surrender and effectively disarm without having to escalate into an open, shooting war.

The only problem with the staged approach is that Israel has already, in the past two weeks, directly attacked major research and development facilities inside Iran, and has apparently done so in part with missiles fired either from Israeli fighter-bombers or from ships offshore in the Persian Gulf. The two attacks took place on July 2, 2020, one directed against the Iranian nuclear research facility at Natanz and the second was targeting a claimed missile development center at Parchin. Neither attack was much reported in the western media even though they together appeared to be a major escalation of the Iran-Israel conflict, with potentially significant consequences.

Even the Times, again relying on an anonymous “Middle Eastern intelligence official with knowledge of the episode,” eventually reported that Natanz was not hit by a cyber-attack, as had been previously suggested, but by a “powerful bomb” which might well have been placed in the site’s main building by an Israeli agent. One assumes that the “Middle Eastern official” was Israeli and Israeli media sources also confirmed that Parchin was hit by missiles fired from an F-35 Israeli Air Force plane, which suggests that the Benjamin Netanyahu is not exactly being shy about what his government did.

The point is that the U.S. and the Israelis are intent on going to war against enemy number one Iran and are packaging their actions in such away as to suggest that they are really behaving in a moderate fashion. They are assuming that Iran will retaliate, but in such a way as to avoid intensifying the conflict. In reality, taking action to destroy a nation’s economy is an act of war just as much as is staging attacks using bombs carried by spies or using missiles fired from planes. There is already a war going on, but the smokescreen provided by the coronavirus spread and BLM means that no one seems to want more on their plate and there is great reluctance to call it for what it is.

Philip Giraldi, Ph.D. is Executive Director of the Council for the National Interest.