POLITICAL PROSTITUTES IN D.C. SPREAD THEIR LEGS FOR ZIONIST MAFIA

Klayman: Establishment Repubs Sell Out Trump and We the People: Now Mr. President, Shut the Worthless Government Down! 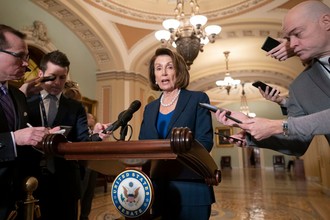 President Trump on Tuesday abandoned months of strident demands for Congress to give him $5 billion for his border wall, bowing to political reality as Republicans scrambled to avoid shutting down large portions of the government this weekend.

It was a stunning turnaround from one week ago, when Trump told Democratic congressional leaders during a bizarre on-camera sparring match that he’d be “proud” to shut down the government to get his wall money. Instead, White House press secretary Sarah Sanders said Tuesday, Trump does not want a shutdown and will identify “other ways” to fund a wall along the U.S.-Mexico border.