Two Russian strategic bombers capable of carrying nuclear weapons have landed in Venezuela in a show of support from Moscow which has infuriated Washington.

The TU-160 supersonic bombers, known as ‘White Swans’ by Russian pilots, landed at Maiquetia airport near Caracas on Monday after covering more than 6,200 miles.

Their deployment came days after Venezuelan President Nicolas Maduro, whose left-wing administration is the most significant U.S. foe in Latin America, held talks with President Vladimir Putin in Moscow. 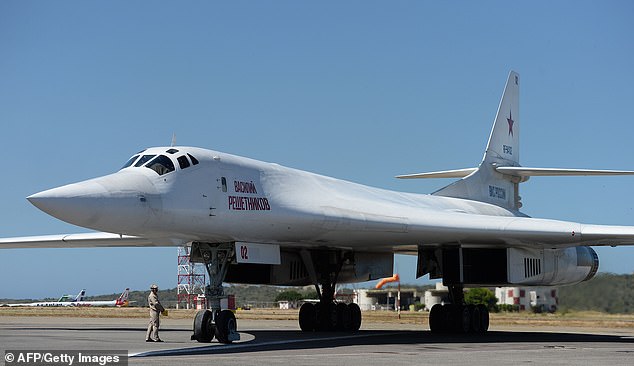 Capable of carrying short-range nuclear missiles, the planes, called Blacjack by NATO, can fly over 7,500 miles without re-fuelling and have landed in Venezuela twice before in the last decade.

‘Russia’s government has sent bombers halfway around the world to Venezuela,’ fumed U.S. Secretary of State Mike Pompeo on Twitter.

‘The Russian and Venezuelan people should see this for what it is: two corrupt governments squandering public funds, and squelching liberty and freedom while their people suffer.’

As OPEC member Venezuela’s socialist-run economy implodes, Russia has become a key lender of last resort, investing in its oil industry and providing support to its military.

Capable of carrying short-range nuclear missiles, the planes, called Blacjack by NATO, can fly over 7,500 miles without re-fuelling and have landed in Venezuela twice before in the last decade.

‘Russia’s government has sent bombers halfway around the world to Venezuela,’ fumed U.S. Secretary of State Mike Pompeo on Twitter. 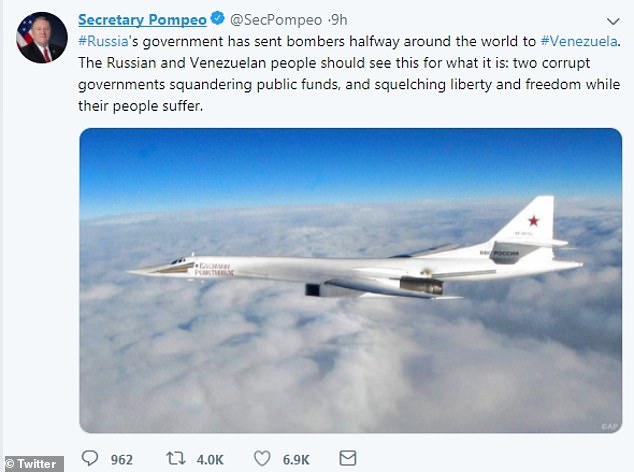 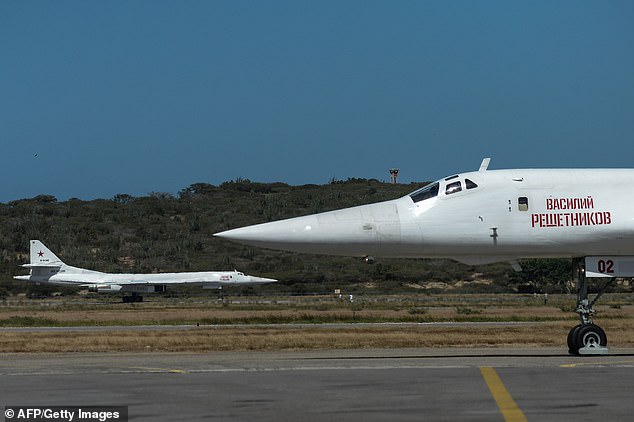 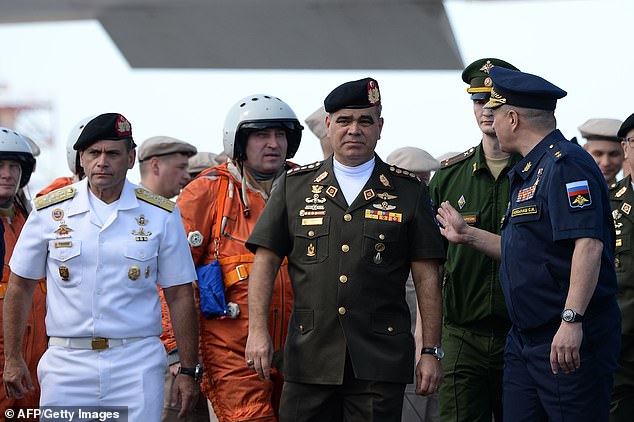 The Kremlin on Tuesday rejected Pompeo’s criticism, saying it was ‘highly undiplomatic’ and ‘completely inappropriate.’

Russian President Vladimir Putin’s spokesman, Dmitry Peskov, said such criticism sounds odd coming from a country ‘half of whose military budget would be enough to feed the whole of Africa.’

Russia’s Defence Ministry, which said the bombers had been accompanied by two other Russian military planes, did not say if the planes were carrying missiles, how long they would stay for, or what their mission was.

Russia has used them in the past to flex its military muscles under the nose of the United States, delighting Venezuelan officials who have cast such flights as evidence it is able to defend itself, with allies’ help, from any attack.

Maduro frequently invokes the possibility of a U.S. invasion in the South American nation, a notion Washington denies.

Maduro said the talks with Putin in Moscow this month yielded Russian investment in the South American country’s oil and gold sectors.

My Comment:  America doesn’t care how many children starve to death and die due to their bombings of helpless nations.  They only colonialize poor nations to asset strip them of their wealth and loot them for American corporations and the British Empire run by Extreme Psychopaths.  This is evil but evil is what American foreign policy IS!