As vote counting continues from Tuesday’s midterm elections and three states have a handful of elections with razor-thin margins, the fight has become about whether all the votes should be counted in the first place.

The races for Arizona’s US Senate seat, Florida’s US Senate seat and governor, and Georgia’s governor are all extremely close — close enough that under some state laws, a recount is warranted.

As of this writing, Arizona’s Rep. Kyrsten Sinema (D) is ahead of Rep. Martha McSally (R) by about 21,000 votes (and they’re still counting); Florida Gov. Rick Scott (R) leads incumbent Sen. Bill Nelson (D) by about 13,000 votes for the Senate seat; Rep. Ron DeSantis (R), whom the Associated Press declared the winner, is ahead of Tallahassee Mayor Andrew Gillum (D) by about 34,000 votes in the Florida governor’s race; and Georgia Secretary of State Brian Kemp (R) is ahead of former state House Minority Leader Stacey Abrams (D) by 63,000 votes in the governor’s race there.

In Arizona, the recount margin, should they get to that point, is extremely narrow — one-tenth of 1 percent difference between the top two candidates (some exceptions apply). In Florida, races can go to a recount if they are within half a percentage point — a threshold that both the Senate and governor’s race fell within when counties had to submit their unofficial vote tallies Saturday, prompting the state to order recounts for both. In Georgia, where the recount margin is 1 percent, the circumstances are a bit different: The question is whether Kemp will fall under 50 percent to force him into a runoff election with Abrams.

Each race in each state has been subject to unique circumstances — in Georgia, Kemp was in charge of administering the election while also running in it. He’s engaged in a number of moves to purge voters, of which voting rights academic Carol Anderson wrote in the Atlantic, “if the Georgia race had taken place in another country — say, the Republic of Georgia — U.S. media and the U.S. State Department would not have hesitated to question its legitimacy.”

The question, however, is what each state does now. Republicans in each state have filed lawsuits to stop or slow the counting of votes.

Some, like Scott, are even leaning on conspiracy theories to halt the counting of votes: He mentioned Hillary Clinton, who was not involved in this election, twice in the announcement of his lawsuit because his opponent’s elections lawyer worked for Clinton in 2016. President Trump echoed this on Friday when he took questions from reporters.

The stakes of each are enormous: the outcomes of each could determine if Senate Republicans have an extremely narrow majority or a comfortable one. Both Democrats running for governor could have huge policy impacts on people in the state — and potentially weigh in on the maps the states redraw in 2020.

Arizona is among the states that are heavily dependent on mail-in ballots, which enable residents to vote early or physically drop off their ballots at designated locations on Election Day. As Vox’s David Roberts has written, mail-in ballots are often way more convenient for voters, who can make their decisions at home and simply send them in once they’re done. In a number of places where mail-in ballots are used, studies have found that they streamline the experience so much that they improve voter turnout.

Currently, 27 states use mail-in ballots in some capacity, and Washington, Colorado, and Oregon use them for all elections, according to the National Conference of State Legislatures.

The downside of mail-in ballots is that they can take much longer to count compared to votes that are submitted the more traditional way on Election Day.

This issue is exactly what’s playing out in Arizona, and one that California has often had to deal with as well. As of Wednesday, there were still 600,000 mail-in ballots — of more than 2 million total ballots cast — that Arizona officials were waiting to process in places like Maricopa County.

Part of the reason processing mail-in ballots takes so long is that these votes need to be verified. One way officials do this is by making sure the signatures on the ballots match up with residents’ signatures on file. If they don’t, officials reach back out to voters to confirm the ballots’ authenticity.

Because some of the mail-in ballots don’t arrive until very close to Election Day, this verification process can take place afterward and make tabulating the votes much, much slower.

This process, in addition to delaying when results are announced, is now the focus of a Republican lawsuit. The Republican parties of four Arizona counties have filed a suit against the Arizona secretary of state and all county recorders over how mail-in votes are verified, the Hill reports.

The GOP plaintiffs argue that various counties are verifying votes differently and note that the process should be more consistent. Some counties call voters after Election Day to verify their ballots, while others don’t, they say. They’re asking for an injunction so that all ballots verified after Election Day can be omitted from any final vote tally — and they’re specifically calling out multiple counties that are seen as Sinema strongholds.

But late Thursday night, a federal judge rejected the lawsuit, allowing the count to move forward.

What’s going on in Florida

Plainly, a recount means that every vote cast will be retabulated. In Florida, if the margin of victory is 0.5 percent or less, a machine recount is ordered. If that margin is 0.25 percent or less, the state will trigger a manual recount, where the “over votes” and “under votes” are counted by hand.

This matters particularly in the Senate race. (DeSantis’s 0.41 percent lead means the gubernatorial race will be recounted by machine, but Scott’s narrower 0.15 margin means counting by hand.) For example, in Broward County, of the 714,859 people who turned in ballots, only 682,453 voted in the Senate race, according to the current count — less than almost every other statewide race on the ballot. Broward County is a Democratic stronghold in Florida.

Why there have been so many “under votes” in Broward County remains a mystery. Some have said it’s because of how the ballot is formatted, putting the Senate race on the bottom of the page under a long block of voting instructions. But Nelson’s lawyer thinks it’s a machine error that would be rectified with a hand recount.

A recount also means that provisional and overseas absentee ballots — all of which are typically counted after Election Day — are counted, a process that can at times take more than a week.

This is where the process gets tricky.

There are always mail-in ballots and provisional ballots that aren’t counted — due to a lack of ID or matching address — that can be counted if they are rechecked. Typically, voters are notified of errors and have to sign an affidavit “curing” the mistakes before Election Day. But there are always ballots turned in on Election Day that can’t be re-checked, and people that cast provisional ballots.

According to Daniel Smith, a political scientist with the University of Florida and an election watcher, of the mail ballots returned on Election Day, more than 13,000 had issues.his matters, particular

My database yesterday revealed that of the 126k VBMs ‘returned’ on Election Day (in FL, VBMs (except overseas) must be received by SOEs by 7pm on Election Day), over 13.4k had problems.

17 people are talking about this

Voters had until 5 pm Eastern time Thursday to make sure their vote counted, or “cure” their votes of any errors, and county supervisors must submit the results from provisional ballots by Saturday.

In a recount, the latter deadline could change. For now, it’s worth noting that in 2016, Marc Elias, currently Nelson’s elections lawyer, was general counsel on Hillary Clinton’s campaign and said that Clinton’s chance of winning through recounts was next to none.

“The number of votes separating Donald Trump and Hillary Clinton in the closest of these states — Michigan — well exceeds the largest margin ever overcome in a recount,” he said then.

Rick Scott filed a lawsuit to halt vote counting on Thursday, saying that Elias “is here to try to steal the election, and to try to thwart the will of the voters of Florida.”

Trump echoed a similar sentiment on Friday when answering questions on the White House lawn: 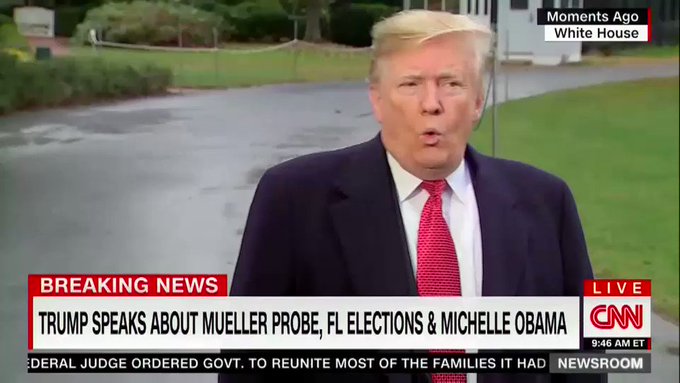 Trump suggests Senate Seat is Being Stolen from Rick Scott by Fusion GPS.

1,217 people are talking about this

Kemp resigned as Georgia’s secretary of state on Thursday, two days after a group of five Georgia voters sued him to force him out of that office. The voters, represented by theProtect Democracy nonprofit, argued that it was a conflict of interest for him to remain in office as votes were counted. The lawsuit sought to have Kemp barred from having anything to do with counting votes, and from overseeing a potential recount or runoff.

During a press conference on Thursday, Kemp said he was not concerned about the suit and was stepping down to begin his transition to governor. “We’ve won and now I’ve got to move on, but the process is true and has been for many, many years in Georgia,” he told reporters.

Soon after, lawyers for Abrams’s campaign held their own press conference, where they explained why the candidate would not be conceding the election and blamed Kemp for a number of issues on Election Day, which saw voters in a handful of precincts with large nonwhite populations deal with hours-long lines, an insufficient number of voting machines, and a dearth of provisional ballots.

Abrams’s campaign also noted that ballots were still being counted in some counties, despite these countries previously reporting that all votes were in. As an example, Abrams campaign manager Lauren Groh-Wargo mentioned Cobb County, which reported some 300 additional votes this morning. Groh-Wargo and other members of Abrams’s campaign also said they had spoken with college students living out of state who sent back absentee ballots well before the deadline but have yet to receive confirmation of their ballots being counted.

The campaign has encouraged voters who cast provisional and absentee ballots to report these issues with a voter protection hotline. Counties are required to verify their results by 5 pm on November 13.

Abrams’s team also announced they are preparing to file legal action in Georgia’s Dougherty County, which was affected by Hurricane Michael in October. According to Kurt Kastorf, a member of Abrams’s litigation team, absentee ballots were sent to the county late due to a language error and were further delayed due to the hurricane, with some mail eventually being routed through Tallahassee, Florida. The campaign says it has heard from people who received ballots in final days before the election, leaving them with too little time to file and return their ballots by the deadline. Others never received ballots at all. The suit will ask that any ballots received after the deadline be counted.

Recounts rarely change election results. Then again, sometimes they do.