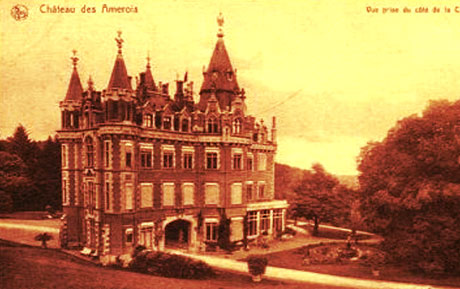 In his writings (“Bloodlines of the Illuminati“, p. 205) and speeches, Fritz Springmeier mentions a secret castle located near the village of Muno in Belgium. This castle would, according to him, be a center of the occult and have a cathedral inside with a dome with 1,000 lights. This castle is referred to as the Mothers-of-Darkness castle. Monarch programming would be performed on children there. This castle is also sometimes referred to as the “Castle of Kings”. Its real name is “Château des Amerois” and it is located in Bouillon (Belgium), near the village of Muno. This castle and its domain, the Muno forest, belonged to Prince Philippe of Saxe-Cobourg-Gotha, Count of Flanders and father of King Albert I. He bought the property in 1869 to the Marquis van der Noot d’Assche. The castle of Romantic style was built in 1877 for Philippe of Saxe-Cobourg Gotha by the architect Gustave Saintenoy. It has 365 windows. This castle was later bought by ——, niece of the Belgian scientist and industrialist ——.

Postcards of the castle

Strangely, Fritz Springmeier is not the only one to mention this castle. In their 2001 book dedicated to the Dutroux affair, “Dossier pédophilie. Le scandale de l’affaire Dutroux” (Paedophilia File: The Scandal of the Dutroux Affair) p. 259, Jean Nicolas and Frédéric Lavachery also mention the Amerois castle as a place where satanic ritual parties with children sacrifices allegedly took place. A report of the Dutroux affair refers to the letter of a retired gendarme talking about his castle. At the beginning of April 1996, he hosted a Mexican priest. A Dutch friend of the priest came to pick him up. The Dutch mentioned the Château des Amerois as a place where satanic soirées took place with children sacrifices. An American from the NATO, who allegedly took part to one of these parties and felt disgusted, gave this information to the Dutch. 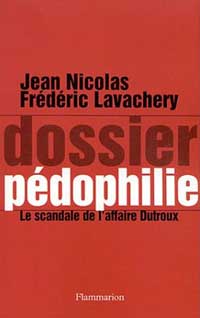 This domain still belongs to the —— family. The document below shows an authorization was delivered in 2005 to —— to hunt deer on the Amerois domain (October 23, November 13 and December 4).

There are more intriguing pieces of information. According to the Grand Duchy of Luxembourg official bulletin (28 December 2001), ——, shareholder of the ——Group, who lives in the Amerois castle (1, Les Amerois, B-6830 Bouillon (Belgium)) founded a company with ——, on July 3rd 2001. The name of this company is —— International. Through this holding company, —— is the main shareholder of The ——, which organizes activities for children with summer and holiday camps. On May 1st 2004, —— International’s registered office was transferred to Bertrange (5 rue Pletzer, L-8080 Bertrange). This address corresponds to The ——, located at the very same place. It seems that the former name of ——International was “The ——Company”, which also belonged to ——. This is rather weird when you think about what Fritz Springmeier and a police report of the Dutroux affair told about the Amerois castle.