Despite media claims to the contrary, elected Mexican officials previously promised to allow the invasion of Central American migrants. There is a history here.

The heavily financed horde of Central American migrants has overwhelmed the token resistance from Mexican military and advanced north toward the Southern U.S. border.  As described by the Associated Press today: “growing army of migrants resumes march toward US.”  This is a well financed, well organized, left-wing political operation strategically timed to reach the U.S. border and coincide with the 2018 mid-term election.

Estimates as to the number of economic migrants varies between 7,000 to 10,000 and the numbers are growing fast as they are now facilitated by, and joined by, ideological comrades within Mexico.   The ‘invasion force’ is now more than two-miles long. The group claims to be fleeing violence in Guatemala, Honduras and El Salvador, yet the group has deployed violence against Mexican officials who are vastly outnumbered.

President Trump has requested that Mexican officials stop the advancement of the massive group and praised any efforts therein.  However, it appears there is a disconnect between what actions U.S. officials think is happening – and the actual advancement on the ground.  Those marching toward the U.S. are no longer finding any resistance.

As explained in a USA Today review: “Sunday the crowd was large and the mood mostly ecstatic. Olivin Castellanos, 58, a truck driver and mason from Villanueva, Honduras, said he took a raft into Mexico. He hopes to work in construction in the United States.”  “No one will stop us, only God,” he said. “We knocked down the door and we continue walking.”

Initially the group was between 3,000 and 5,000.  However, in the past 36 hours the numbers have grown considerably; seeming to double in size overnight. 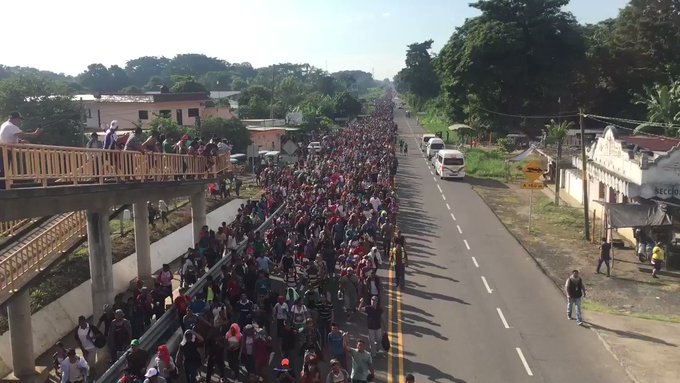 I’m only just realizing the massive scale of this caravan as they march north into Mexico. It’s several thousand people. Just look.

Full efforts are being made to stop the onslaught of illegal aliens from crossing our Souther Border. People have to apply for asylum in Mexico first, and if they fail to do that, the U.S. will turn them away. The courts are asking the U.S. to do things that are not doable!

While President Trump asks Mexico to do more in their efforts to stop the invasion force, it would be wise to remember the history of these issues.  The Mexican government are not likely to offer more than the appearance of token resistance and their history in this regard is very clear.

With the migrant march from Central America, mostly Hondurans, Guatemala and El Salvador it is important to revisit the history of Mexican threats -from Mexican officials- which precedes the current year complicity.

♦ In August of 2017 President Trump and Commerce Secretary Ross were discussing their trade efforts within NAFTA and renegotiation with Mexico/Canada on a trilateral basis. However, the U.S. administration said if it doesn’t work, they’d scrap the 3-way NAFTA deal and go one-on-one with individual bilateral agreements. In response, Mexican Economic Minister Ildefonso Guajardo threatened to flood the U.S. with South American illegal aliens, criminals and gang members as leverage:

MEXICO CITY (Reuters) – Mexico could pull back on cooperation in migration and security matters if the United States walks away from talks to renegotiate the North American Free Trade Agreement, the Mexican economy minister said in a newspaper report published on Thursday.

However, Mexican Minister Ildefonso Guarjardo’s threat was mild compared to a threat in January 2017, when another Mexican official promised to flood the U.S. with South American drugs and gang violence:

Watch, and more importantly LISTEN, to his words at 02:10 below (Prompted):

This was the most politically explosive admission by the Mexican government in the past decade. Even Fareed Zakaria realized what was being threatened and quickly attempted to redirect the conversation.

Mr. Castaneda was openly admitting a willingness to promote drug trafficking. Additionally, Jorge Castaneda is so proud of the threat, he posted a video of the discussion on his own YouTube page.

Anyone with video of Fareed Zakari (CNN) show? Mexico official says retaliation to Trump would be to flood U.S. with drugs and narcotics. 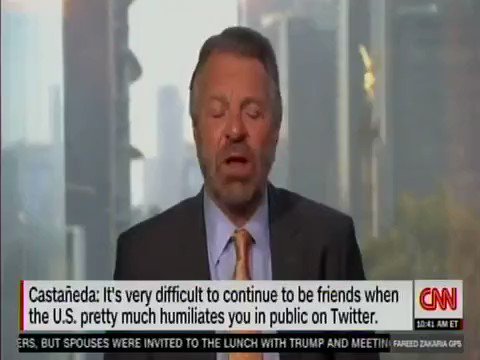 In June 2018, during the Mexican presidential election, leading candidate Lopez-Obrador previewed his perspective on Central American migration into the United States:

MEXICO – Mexican presidential candidate Andrés Manuel López Obrador (AMLO) said Tuesday that migrants from all over the world who decide it’s “a necessity” have a “human right” to migrate to the United States.

“Soon, very soon, after the victory of our movement, we will defend migrants all over the American continent and the migrants of the world who, by necessity, must abandon their towns to find life in the United States,” Lopez Obrador said during a rally in the Mexican city of Culiacán, eluniversal.com reports.  “It’s a human right we will defend,” he added. (more)

In July Andres Manuel Lopez-Obrador won the election and is now President-elect of Mexico awaiting his inauguration on December 1st.