Another Kavanaugh Accuser With a Credibility Problem: Swetnick Exposed as Liar & Abusive

In the suit, Webtrends alleged Swetnick claimed to have graduated from Johns Hopkins University but the company said it subsequently learned the school had no record of her attendance. Webtrends said she also “falsely described her work experience” at a prior employer.

The suit also alleges Swetnick “engaged in unwelcome, sexually offensive conduct” while at Webtrends and “made false and retaliatory allegations that other co-workers had engaged in inappropriate conduct toward her.”

The suit alleges Swetnick “engaged in unwelcome sexual innuendo and inappropriate conduct” directed at two male employees during a business lunch, with Webtrends customers present. Swetnick claimed two other employees had sexually harassed her, according to the suit.

Webtrends’ suit said it determined Swetnick had engaged in misconduct but could not find evidence to support her allegations against her colleagues. Later, the company alleged, Swetnick took medical leave and simultaneously claimed unemployment benefits in the District of Columbia.

Comment:  The Zionist Mafia is Ever so determined to knock Trump down and all of his supporters and to use legal assassins such as this discredited tart as another legal arrow pointed at Kavanaugh.

A friend of Julie Swetnick, the woman who accused Supreme Court nominee Brett Kavanaugh of being present at parties where gang rapes occurred, is disputing a claim that she made in a personal injury lawsuit she filed.

Swetnick claimed in the lawsuit, filed against the Washington Metro Transit Authority that she lost $420,000 in income after injuring her nose during a fall on a train in 1992.

Swetnick, who is being represented by attorney Michael Avenatti, claimed to be an actress and model at the time and said she lost “numerous modeling commitments” because of her injury.

But a man who Swetnick listed as a witness who would provide evidence of her lost wages is disputing key claims she made in the lawsuit.

Swetnick listed a company called “Konam Studios” to support her claim of lost wages. She listed Nam Ko as an owner of the company.

But Ko told the Associated Press that he did not own a studio and that he never hired Swetnick for modeling work.

He also told the AP that he met Swetnick more than a year after she allegedly injured her nose.

He told the AP that he vaguely remembered Swetnick asking him to be a “character reference,” but believed it was for a job application and not a lawsuit.

Swetnick came forward Wednesday claiming that she saw Kavanaugh at parties in the early 1980s where girls were gang-raped. In a declaration released by Avenatti, Swetnick claimed that Kavanaugh and his friend spiked punch at the parties so that they could target female victims.

Kavanaugh would have been in high school at the time of the alleged incident, while Swetnick had already graduated.

Swetnick became the third woman to accuse Kavanaugh of sexual misconduct during his high school and college years. Dr. Christine Blasey Ford accused Kavanaugh of sexually assaulting her at a house party when he was 17 and she was 15. A Yale classmate of Kavanaugh’s claimed that he put his penis in her face during a dorm room party in 1983.

Kavanaugh has denied the allegations. He called Swetnick’s claims a “farce” during a hearing before the Senate Judiciary Committee on Thursday.

Swetnick made shocking allegations against Kavanaugh, but Swetnick also has one of the more troubled history of the Kavanaugh accusers.

As The Daily Caller News Foundation first reported on Friday, Swetnick was accused by a former employer of engaging in “unwelcome, sexually suggestive conduct” in meetings with male colleagues.

The company, Webtrends, also claimed in a November 2000 lawsuit that Swetnick lied on her resume by falsely claiming that she had a degree from Johns Hopkins University.

Swetnick was also slapped with a restraining order in 2001 by an ex-boyfriend. Richard Vinneccy claimed that Swetnick threatened him and his family after they broke up following a four-year relationship.

“She’s not credible. Not at all,” Vinneccy told Politico, which first reported the restraining order.

Avenatti has dismissed all of the allegations against Swetnick, claiming that they are irrelevant to her allegations about Kavanuagh.

“This is all hearsay … None of this is relevant, not one bit,” he told the AP regarding her 1994 lawsuit.

He told TheDCNF that the 2000 lawsuit against Swetnick was “bogus.”

Avenatti and Swetnick have claimed that other witnesses will support her allegations about Kavanaugh, but none have turned up so far. The Wall Street Journal contacted dozens of former classmates and colleagues of Swetnick’s but was unable to corroborate her story.

Content created by The Daily Caller News Foundation is available without charge to any eligible news publisher that can provide a large audience. For licensing opportunities of our original content, please contact licensing@dailycallernewsfoundation.org

Wake up Right! Subscribe to our Morning Briefing and get the news delivered to your inbox before breakfast! 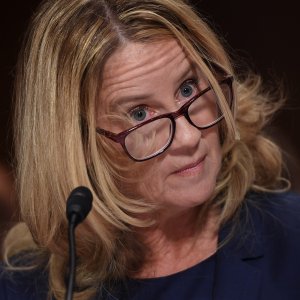