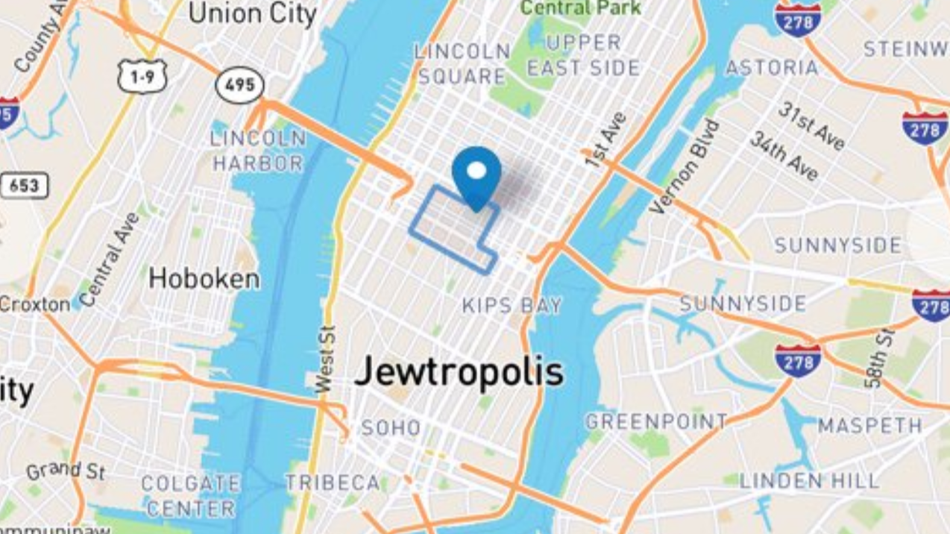 This is a pretty good troll. Someone defaced the map feature of Snapchat to show New York City as “Jewtropolis.”

Snap, the company behind Snapchat, apologized on Thursday after its map feature mislabeled New York City as “Jewtropolis.”

Snap said that the incident was due to vandalism of data from OpenStreetMap, a service that allows users to edit and submit information to build its maps.

“Snap Map, similar to other apps, relies on third-party mapping data from OpenStreetMap, which unfortunately has been vandalized,” a Snap spokesperson said in a statement. “This defacement is deeply offensive and entirely contrary to our values, and we want to apologize to any members of our community who saw it. As soon as we were alerted to this, we began working with our partner Mapbox to fix it, and it is now corrected on the Snap Map.”

And look at the tears being shed over this.

Whatever mapping service that Snapchat, CitiBike, StreetEasy, (perhaps others) use — it seems — is showing New York City as “Jewtropolis” this morning.

Couldn’t find a way to report directly to @streeteasy or @zillow or @openstreetmap so here’s a screen shot of a condo located in “Jewtropolis”. Assuming they’ve been hacked. Might want to get on that and fix it. #Antisemitic @ADL_National

.@Mapbox, it’s being reported that New York is labeled as “jewtropolis” on your maps, which are used by @Snap, @FoursquareAPI, @FinancialTimes, @evernote and others. Have you taken down this anti-Semitic vandalism yet? We’re ready to help. https://www.buzzfeednews.com/article/ryanhatesthis/snapchats-snap-map-is-currently-showing-jewtropolis-instead?bftwnews&utm_term=4ldqpgc#4ldqpgc …

The name change appears to be the fault of Mapbox, the third party mapping data startup that Snapchat uses to power their Snap Map.

.@ADL_NYNJ is deeply concerned at reports of mapping sites referring to #NewYork as #Jewtropolis. This is #Antisemitic and we are calling on companies to fix this immediately #noplaceforhate

Whatever mapping service that Snapchat, CitiBike, StreetEasy, (perhaps others) use — it seems — is showing New York City as “Jewtropolis” this morning.