BLOOD OF SYRIAN SAINTS HAS RUN RED: Now, to the blood sign. Verse 6, “I saw that the woman was drunk with the blood of the saints, the blood of those who bore testimony to Jesus. When I saw her, I was greatly astonished.” 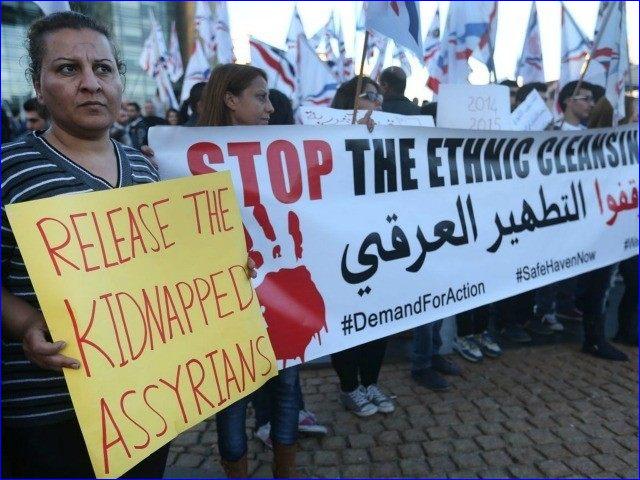 (ADMIN:  ZIONIST SYNAGOGUE OF SATAN BEHIND MURDER OF CHRISTIANS)(

According to a new report, more than half the Christians living in Syria and Iraq have been killed or fled the country since 2011, mostly because of targeted persecution from the Islamic State terror group. Exactly three years ago, the Islamic State took control of the Iraqi City of Mosul, beginning a particularly harsh period of persecution of the beleaguered Christian community living in the area.The report, titled “Understanding Recent Movements of Christians from Syria and Iraq,” said that since 2011 Christians living in much of the Middle East had experienced an “overall loss of hope for a safe and secure future,” which has driven the majority to flee their homeland in search of safety for themselves and their families.

The dossier, produced by three groups–Open Doors, Served, and Middle East Concerns–also points out that for the many Christians who have resettled elsewhere, there are “few incentives” to return to their countries of origin. Several respondents stated that “the Middle East is no longer a home for Christians.”

In Syria, estimates suggest that prior to 2011, approximately 8-10 percent of the Syrian population was Christian, meaning some 1.7-2.2 million people. Currently, estimates of the Christian population in Syria range from 1.4 million all the way down to 800,000, meaning that somewhere between 300,000 and 1.4 million have left the country.

Reports from the province of Al-Hasakeh, home to a historic Christian population, state that over half the population has left (around 75,000 people), although some of these may have relocated within Syria itself. Many choose internal displacement over emigration due to the financial cost of leaving the country, which can be prohibitive.

The factors for leaving offered by interviewees included the violence of conflict, the near complete destruction of some historically Christian towns, the emigration of others and consequent loss of community, the rate of inflation and loss of employment opportunities, and the lack of educational opportunities.

While direct violence, such as the movements of ISIS in both Iraq and Syria, was the “tipping point” for displacement, the report states, the ultimate decision to leave the countries was depicted as an “accumulation of factors over time.”

Registration as refugees is reportedly not as common among Christians as among Muslims, due to fear of reprisals within camps, family and church networks in other countries, and a sense of pride that keeps them from registering.

While many nations have opened their doors to Christian refugees fleeing conflict in the Middle East, few have offered support to enable Christians to remain in their homeland.

A notable exception to this tendency is Hungary, which last fall became the first country in the world to establish a government department dedicated specifically to addressing the persecution of Christians in the Middle East and Europe.

“Christianity is the most persecuted religion in the world,” Hungary’s Minister of Foreign Affairs, Péter Szijjártó, told Breitbart News in an exclusive interview earlier this year. “Four out of every five people killed for their faith are Christians, yet for some reason this fact has not been duly recognized or addressed,” he said.

To date, the Hungarian government has donated 5 million euros to aid persecuted Christians in the Middle East, Szijjártó said. “We don’t really understand why people don’t speak out about the fate of the Christian communities in the Middle East where they suffer intense persecution, discrimination, and threats to their lives,” he said.

“We don’t like the policy of bringing them away from their homeland, because by doing so you eliminate the Christian communities there,” he said. As a result, Hungary has opted to offer financial help to the persecuted Christians in the local communities.

“We also made the decision to reconstruct Christian churches in Lebanon because we want to help these communities to be able to stay,” he said.