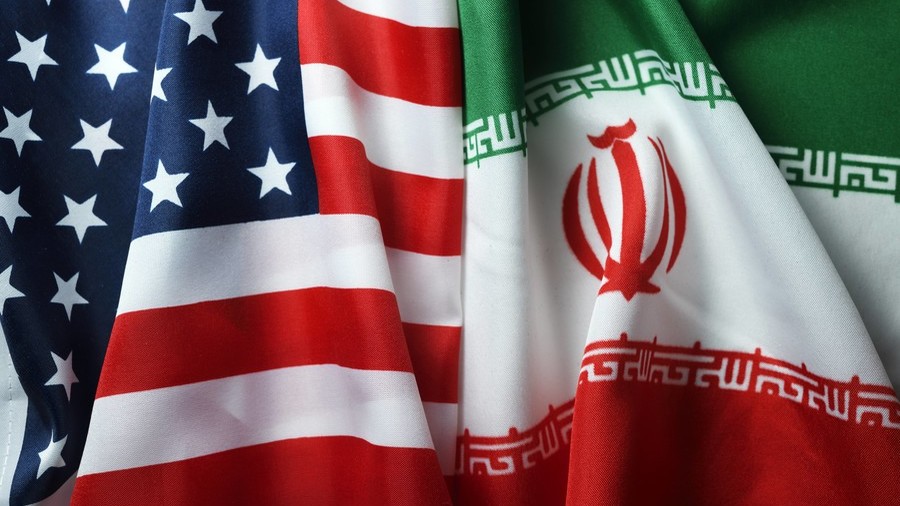 © Christian Ohde / Global Look Press
The head of Iran’s elite Islamic Revolutionary Guards (IRGC) has said that Iranian officials would never meet with Donald Trump, “or any other US president.”

“Mr Trump! Iran is not North Korea to accept your offer for a meeting,” said IRGC commander Mohammad Ali Jafari as quoted by the state Fars News agency. “Even US presidents after you will not see that day.”

Jafari’s statement comes just one day after Trump expressed a willingness to meet with Iranian President Hassan Rouhani “anytime they want,” with no preconditions. Meeting his Iranian adversaries, Trump said, would be “good for the country, good for them, good for us and good for the world.” 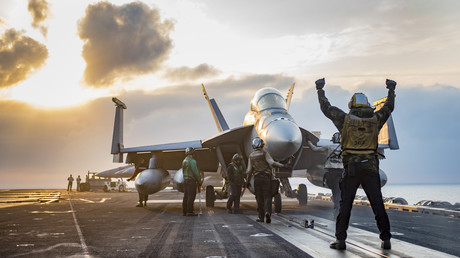 Is Trump planning to strike Iran next month? Here’s what you need to know

Officials from both sides, however, have stressed the need for certain conditions to be met before a meeting could take place. Hours after Trump extended the offer to Tehran, US Secretary of State Mike Pompeo contradicted Trump and placed a raft of conditions on any future meeting.

“If the Iranians demonstrate a commitment to make fundamental changes in how they treat their own people, reduce their malign behavior, can agree that it’s worthwhile to enter into a nuclear agreement that actually prevents proliferation, then the president said he’s prepared to sit down and have the conversation with them,”Pompeo told CNBC.

Since Trump withdrew the US from the JCPOA, the nuclear deal which guaranteed Iran some sanctions relief in exchange for a halt on nuclear weapons development, Pompeo’s State Department has kept up its pressure campaign against Iran’s government.

In May, Pompeo set out 12 demands that Iran’s leadership would have to meet before the US would enter into a new nuclear agreement with the Islamic Republic. These conditions included putting a complete stop to Iran’s nuclear weapons programs, a complete withdrawal of its forces from Syria, and an end to its support of foreign terrorist groups like Hezbollah and Hamas.

Iran too has set its own preconditions to any meeting with the US. Hamid Aboutalebi, one of Rouhani’s advisers, tweeted on Monday that the US would have to rejoin the JCPOA, give “respect to the great nation of Iran,” and “reduce hostilities,”before any meeting could take place. Deputy Speaker of the Iranian Parliament Ali Motahari echoed Aboutalebi’s words, saying it would be “humiliating” for Iran to hold talks with the US right now.

While the Revolutionary Guards do not speak for Rouhani, they are an influential force in Iran. On Monday, they issued a warning to Rouhani to take “revolutionary actions” to stop the collapse of Iran’s currency, which fell to a record low of 112,000 rials to the dollar, losing half its value in four months.

The plunge in value comes as businesses prepare for the full force of new American sanctions on Iran, set to come into effect in August and November.

Relations between the US and Iran, while usually rocky, have steadily worsened since President Trump withdrew from the JCPOA in May. Rouhani and Trump have exchanged harsh words in recent days, with Rouhani warning Trump that US action against Iran would lead to the “mother of all wars,” and Trump responding with a bizarre, all-caps tweet threatening Rouhani with “CONSEQUENCES THE LIKES OF WHICH FEW THROUGHOUT HISTORY HAVE EVER SUFFERED BEFORE”

Here is Another Enlightening Article From Pravda Report:

Iran has many reasons to distrust the West In the West, Iran has repeatedly been vilified and demonized as a persistent troublemaker and ‘fly-in-the-ointment’ to peace in the Middle East, but Westerners should study contemporary history and world events more closely from their perspective. These events reveal some disturbing, political incidents which have brought Iran to its present situation and give more clarity to its foreign policy decisions and actions.

As far back as World War II, neutral Iran was the subject of intervention when a Western-led invasion (1941) secured the ‘Persian Corridor’ as a supply route to its Allies. To accommodate this support, the West pressured the Iranian government to replace Shah Reza who resisted the invasion with his more compliant son, Crown Prince, Mohammed Pahlavi, the last Shah of Iran.

In 1953, Iran’s progressive and popular PM Mohammed Mosaddegh, was deposed by an Anglo-American-directed coup d’etat and replaced by Shah Pahlavi, making him Iran’s sole, autocratic leader with his close ties to the West. Demonstrators and objectors to the overthrow of their burgeoning democracy were arrested, imprisoned or tortured by the Shah’s secret police, the SAVAK. Had the West not interfered, Iran would most likely still have a democratic government – which they demand today – rather than an Islamic Republic.

Years of unrest followed until February, 1979, when Shah Pahlavi finally fled to Egypt, and Ayatollah Khomeini returned from exile in France and became Iran’s Supreme Leader during the Islamic Revolution. Khomeini was only a young child when the SAVAK arrested his father at their home in the middle of the night and hung him from a tree before his very eyes. From that moment on, Khomeini had neither love nor trust for the blood-thirsty Shah, and his controllers in the West.

An April, 1979 referendum approved an Islamic Republic and a second referendum in December, 1979 approved a Theocratic Constitution which replaced the despotic, autocratic rule of the Pahlavi monarchy. Years of tyranny had finally been brought to an end by the Iranian people’s choice of leadership and constitution rather than be directed by nations from afar with their own interests in mind.

As an Islamic republic, it was immediately opposed by the West and held in contempt as a government which did not adhere to the separation of church and state – a basic, mandatory requirement of Western democracy. Since then, Iran’s relationship with America has been both restrained and, at times, confrontational.

Such disdain for an Islamic Republic is classic irony since politics in America is dominated by right-wing, Christian politicians and backed by dozens of sketchy, extremist, far-right televangelists – and their hordes of odd-ball followers – whose narrow-minded views and policies date back to the Wild West era when America did its level-best to eradicate the Native people in their country.

Radical Islamists who stormed the American Embassy on Tehran in November 4, 1979 and held 52 Americans hostage did not help their diplomatic relations. America was rightfully blamed for its support of the repressive Shah (and his henchmen) and the West’s repeated interventions in Iran’s political affairs. America’s failed hostage rescue attempt did not help, either. After 444 days, all hostages were released and returned to the USA unharmed.

In September, 1980, the devastating Iran-Iraq War began and the West chose its proxy, Saddam Hussein. The war – with a loss of almost one million lives – concluded in a stalemate (1988) and UN-guided truce. The fact that America fully backed Saddam and Iraq – Iran’s mortal enemy – with finances, weapons, munitions and intelligence reports was never forgotten by the Iranian people.

Later, the US decided to make its own war against the Sunnis and, in the end, hung ‘their man’ in Iraq on a host of false allegations against that country. For the US, expediency is the ‘name of the game’ which makes them nothing less than merciless, international ‘users’, a fact which does not go unnoticed by most nations and day-to-day followers of international events.

In July, 1988 the American Navy vessel USS Vincennes, while deployed in the Persian Gulf, carelessly and mistakenly identified Iran Air 655 as an enemy aircraft and shot it down with a surface-to-air missile. All 290 innocent civilians on board – which included dozens of women and children – were killed.

The US reluctantly acknowledged the incident days later but never admitted legal liability and, to add insult to injury, never apologized to Iran and the Iranian people. For America, the loss of 290 Iranian civilians was just a minor, ‘ho-hum’ incident in which a civilian airliner got in the way of their ‘lovely war’. This event clearly bespeaks America’s historic lust for killing and endless blood-letting which is a long-standing trademark of their country.

The ship’s captain, William C. Rogers III, who should have been prosecuted for all 290 deaths, was never charged and, ironically, was later awarded the US ‘Legion of Merit’ for “exceptionally meritorious conduct”. This was another slap-in-the-face to Iran and all those who died as a result of Captain Rogers’ less-than-meritorious actions and glaringly poor judgment.

The final straw in Iran’s clash with the West has been Trump’s decision (2017) to unilaterally cancel the Iran Nuclear Deal negotiated between the five, permanent UN members, Germany, the European Union, and Iran, and to punish Iran – yet again – for something it did not do.

Until its cancellation by America’s president, Iran had observed all articles of the agreement but, once again, was betrayed by this Western power. Such a misguided decision has put peace in the Middle East, and Persian Gulf, into jeopardy.

Although the world may not always agree with Iran’s decisions and actions, these recent, historical events give us a clearer understanding of their present-day views. These events – as indicated above – have given Iran ample reason to mistrust promises, peace treaties and agreements offered to them by Western, democratic governments, and especially the United States.