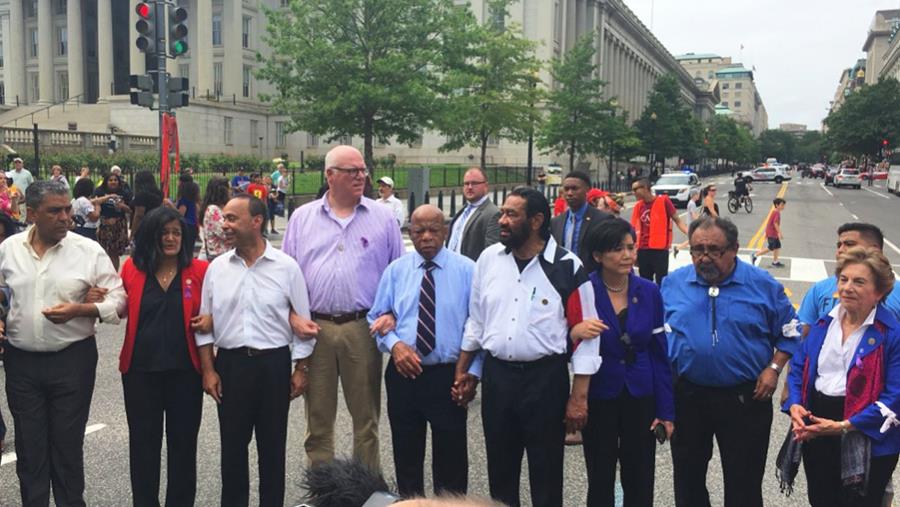 Democrats get serious about immigration, forming a human blockade across Pennsylvania Ave. on Wednesday, June 13, 2018, just a few blocks from the FBI Headquarters in Washington, D.C. (Photo: twitter.com/ella_nilsen)

It is no accident that the hoked up image of Donald Trump heartlessly ripping crying children away from their mothers becomes the predominant media and political theme on the same day that the coup against Donald Trump is dealt huge and significant blows by the Justice Department Inspector General in testimony before the Congress. In fact, to make the point, the Democrats interrupted that hearing with catcalls about internment camps and other political theater.

The confrontation on our southern border is hardly a new problem. Since 2016, 110,000 children and 200,000 Central American families have entered the United States illegally. President Obama used forceful measures to stop this but his apparent “cruelty” escaped media attention. Ask the crazed Democrats what they have done about the genocidal conditions in Guatemala, El Salvador, and Honduras, countries which have been turned into failed narco states ruled by violent gangs in a murderous replica of the feudalism and marches of death which characterized the Middle Ages. These are the same Democrats who avidly support the drugging of the citizens of the United States. These are the same Democrats who have no plan for the economic growth which would actually solve the problem but instead play the fake game of “identity politics” in which people of color are set against “recalcitrant” white people in a war of each against all. Under conditions of economic turbulence, these are the people who are lighting the fuse of new genocides. In Europe, thousands have risked their lives to flee the certainty of war and death in Northern Africa while a corrupt, morally hectoring, and actually racist EU saddles the struggling Italian and Greek economies with supporting and sustaining them.

In August of 1971, the City of London succeeded in destroying the gold reserve monetary system and restructuring the world’s economy as a casino, operating to its sole benefit. A new class of professional managerial elites was set up to maintain a world-wide zero population growth regime in which the rich got much richer and everyone else was sucked into servitude of one sort or another. Economic development of the world, creating productive jobs in the United States and other advanced countries, fundamental research and development and the scientific discovery required for sustained economic growth, these fundamental planks of actual humanism, were abandoned. In their place was a social structure in which the developing countries were put in a permanent state of chaos and war and the classes of people deemed entitled to wealth in the advanced sector was shrunk to the upper 1 and 2% of the population. A huge part of this plan was competition for fewer and fewer jobs and lower and lower costs of labor, world-wide. Immigrants fleeing certain death and suffering in countries deliberately starved of actual development by the IMF and World Bank, were driven to undertake life-threatening journeys into the advanced sector, driving wages down even further in the new host countries. There was inevitable and absolutely predictable resentment from the former middle and working classes in the host countries as they descended into the gig economy and poverty. Among the new arrivals were murderous gangsters, such as MS-13, who brought their brand of vicious killing and rape to their new “homes.” The entirely fake and completely unnecessary “immigration” issue, with all its racist and deadly connotations, was created and continues to be played by the puppet masters.

Lyndon LaRouche forecast that August of 1971 was going to happen when no one else saw it coming. He has spent his entire life fighting against its consequences and bringing a new system into being. Now, there is a new spirit loose in the world as a result of the initiative undertaken by China to develop the world, an initiative reflecting LaRouche’s ideas for large-scale infrastructure and city building projects to bring humanity into a living situation worthy of the human character. This spirit, and the bold determination of Donald Trump, are responsible for averting possible nuclear war with North Korea. LaRouche’s wife, Helga Zepp LaRouche, in a recent statement, points to this spirit as the solution to the immigration and refugee crisis. China, Russia, the United States, and India should, right now, enter into a new four power agreement to undertake joint ventures to develop Africa, Central America, and the other underdeveloped areas of the world. In Central America, this means also an all out effort to eliminate the drug gangs, and their international banking sponsors, while bringing millions into a modern economy and out of poverty and certain early death.

Here in the United States, LaRouchePAC, Lyndon LaRouche’s political action committee, has undertaken a campaign to “steal the base” out from under every Congressional and Senate candidate in the 2018 midterms. We are seeking constituency leaders who will sign a pledge to end the coup against Donald Trump and to implement Lyndon LaRouche’s Four Laws for Economic Recovery: Glass-Steagall banking separation, a credit system funding essential infrastructure and technological advances, direction of the credit from that system only into projects which will raise living standards and the productivity of the population, a crash program to develop fusion power, a transformational energy source. Our foreign policy should be centered on joining China and other willing partners in developing the war ravaged and deliberately failed economies of the former “third world.” We are building a mass movement which will only support candidates based on this program. The opportunity before us now is huge. Everyone we encounter desires to overturn and end the old decrepit system, no matter how much its overlords squeal. The question is, what kind of future should we build? We ask you to join us in this great adventure. Join us. Volunteer for LaRouchePAC’s Campaign to Secure the Future now.

LEARN MORE ABOUT OUR CAMPAIGN TO SECURE THE FUTURE

Policy platform details available at the link above. Thanks for your continued support!