Syrian Observatory of Human Rights: Fake Activism Run By One Man Paid For by the Globalists-PROPAGANDA

Interview 1367 – Fault Lines on NGOs and the Deep State

My Comment:  Although the Trump administration did give 6.6 Million to the White Helmets they have been defunded about 96%!  White Helmets work directly with terrorists although they do a tiny amount of humanitarian work to justify theirselves. 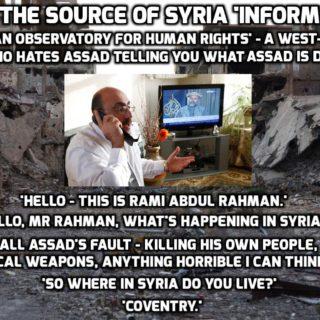 Filed in: Interviews
Tagged with: ngo

My Comment:  The Terrorists Were Funded to $200 Million Before Under Obama;  They have been defunded 96% under Trump’s administration.  To lose 96% Funding is Substantial.  Even This Alternative News with Corbett is Against Glass-Steagall in prior broadcasts.  WHY???  Glass-Steagall will protect middle class savers & Pensions.  Right now Banks bailing themselves in using middle class savers money is legal.  Why is Corbett Against Glass-Steagall?  An economic collapse for the United States is imminent and Glass-Steagall-the only protection we had was stripped from us when Bill Clinton was President with the Monica Lewinsky scandal.

After Bill Clinton repealed Glass-Steagall this ‘scandal’ suddenly seemed to go away.