100% Chance of Recession –Bonner/Bonner And Partners
“Here’s an old proverb for you: What goes up must come down. We’ve just passed an important landmark. The U.S. economy has been going up for 106 months, edging into second place among the longest-lasting expansions of all time. Since 1879, there have been 28 recessions and (obviously) 29 recoveries. The average recovery lasted 41 months. So we’re driving way over the legal limit. What are the odds of an accident? We’re not a mathematician, but we put them at approximately 100% sometime during the next three years. The economy will go into recession. Jobs will be lost. Cars and houses will be repossessed. Some people will be desperate. Like the economy, the stock and bond markets are also cyclical… and driving severely impaired. We are now in the tenth year of a bull market that has taken prices higher than we’ve ever seen them. At these levels, according to market folk wisdom, logic, and the studies of Nobel Laureate economist Robert Shiller, the next 10 years will be a bad time to be in stocks.” 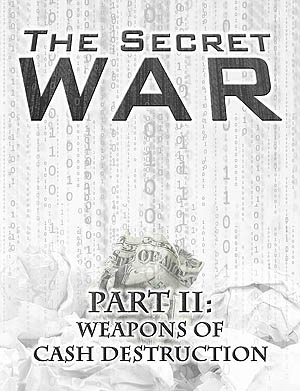 The War on Cash Is Still Good for Gold –Holmes/US Funds
“In ‘The Curse of Cash,’ Harvard economics professor Kenneth Rogoff makes the case that nixing paper money – at the very least, larger-denominated bills – ‘could help more than you might think’ in combating criminal activities such as drug trafficking, corruption, extortion and money laundering. It could even prevent the spread of terrorism and discourage illegal immigration, Rogoff argues. It gets even worse. Central banks, he adds, should have the latitude to drop interest rates below zero during recessions to spur spending….While we all agree that corruption and terrorism are things that should be stopped, killing cash is the absolute wrong way to go about it. Instead, perhaps Rogoff should consider ‘The Curse of No Cash.’ Does he not recall what happened in Cyprus? The government ransacked citizens’ bank accounts to ‘fix’ its own mistakes and mismanagement. In example after example, people’s rights to save and freely hold cash have been disrupted, with tragic results….There’s one area where Rogoff and I both agree, though. ‘As paper currency is phased out,’ he writes, ‘gold prices will rise.’ Were cash eliminated and interest rates plunged underwater, gold’s role as a store of value would become even more apparent and demand for the yellow metal would turn red hot, despite its price appreciation.'”

JUST RELEASED: THE SECRET WAR, PART II: Weapons of Cash Destruction – Today a “cashless” banking system has become key in creating an all-pervasive, all-controlling global government surveillance and power over each of us. For this brief moment in history, you still have the power to save at least your own family, and perhaps America, if you act decisively! To receive your FREE report now, Call 800-289-2646 or register HERE.

US economy ‘out of whack,’ headed for downturn: Alan Greenspan –Fox Business
“Former Federal Reserve Chairman Alan Greenspan told FOX Business on Thursday the U.S. economy is poised to slow down in the coming years. ‘We are moving towards stagflation and in the process of moving in that direction, it feels good, but it’s a false dawn,’ Greenspan told Maria Bartiromo on ‘Mornings with Maria.’ While signs of a slowdown are already evident, he said the ‘longer-term does not exhibit a particularly powerful growth rate.’….’The fiscal system is out of whack,’ the former Fed chair said. ‘And while I approve wholeheartedly of the corporate tax cut and deregulation, the corporate tax cut unquestionably causes the deficit to rise and we are not funding it by other means.’ He added, ‘as long as the funding is not there, productivity cannot grow and accelerate.'”