Tommy Robinson jailed for 13 months after breaking contempt of court laws(Death Sentence For This Journalist.) 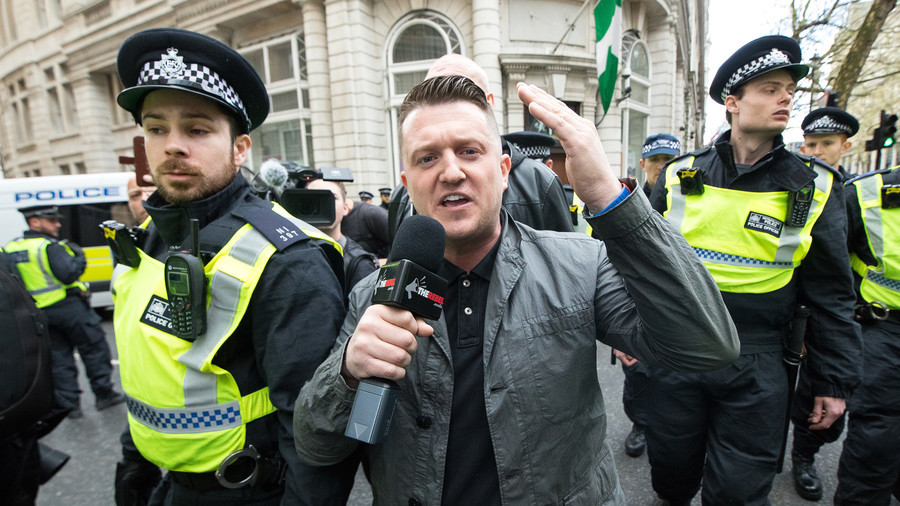 Robinson was on a suspended sentence, as he had previously been arrested for contempt of court after filming outside Canterbury Crown Court in May.

On Friday, Robinson’s media team spoke with RT about his arrest.

A court order is in place to prevent any reporting of the details of the trial in question. 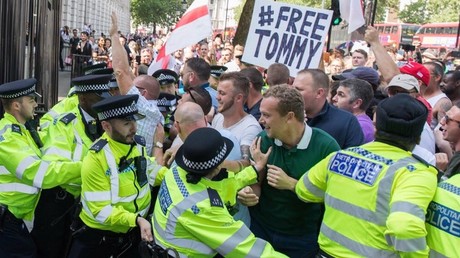 In a video posted on social media, Robinson – a self-styled defender of free speech – can be seen being arrested by a team of police officers. He is put in the back of a police van, with officers telling him that he was under arrest for “incitement” and “breach of the peace.”

Despite being told that Robinson was to be released, the right-wing campaigner’s media producer Caolan Robertson confirmed to RT on Friday that Robinson has been jailed.

“He’s going to die in prison,” Robertson said. “He’s not going to survive.” Robertson, who was present in court, told RT that Robinson’s lawyer had appealed to the judge as he faced multiple and significant threats on his life during his time in prison. “This is a death sentence,” the producer added.

He was hauled before the court amid claims that he had “damaged the court’s integrity and [acted with] prejudice against the defendant,” his media team told RT.

His producer told RT that his phone has been ringing off the hook with offers of help from all over the world. He said that the outspoken right-wing campaigner will have the best legal defense in the world.

“The next step is to fight it with every resource the right wing has,” he said. “The entire country is going to erupt because of this.”

Picketers have already held three protests since Robinson’s arrest on Friday, which took place at Speaker’s Corner and Downing Street.

The case in question has previously seen enraged picketing outside the courthouse, while protesters seen in April screaming abuse at defendants as they arrived at court. The case has seen 29 people charged in an inquiry into child sex abuse and neglect in Huddersfield.

The alleged offences took place in the town between 2004 and 2011, involving girls aged between 11 and 17. A total of 27 men have been accused of offences against 18 people, including rape and trafficking. Two women are charged with child neglect. In total, the 29 defendants face a total of more than 170 charges.

Robinson’s team told RT that they will now head to the police station, where they will try to find out more information about why Robinson was arrested. RT UK reached out to West Yorkshire Police for comment, but the force declined. A spokesman said that they could not comment, as they “don’t identify arrested people.” Leeds Crown Court was unavailable for comment.

Robinson was previously arrested for “incitement” after a protest in 2013, and was jailed for 18 months for mortgage fraud in 2014.

The reporting restriction, which requires all publications within the United Kingdom to cease any mention of the details of the arrest or court proceedings pertaining to the Robinson arrest, was issued on Friday afternoon.