Dredging daily through the Marxist muck of Sulzberger’s Slimes and the rest of Piranha Press is a job that can be as dirty as it is depressing. But every once in a while, a bit of good news provides cause for a smile and a “high-five / high-paw” between Sugar the Cat and your Editor here. The long overdue and hopefully unpleasant death of the sainted professional holohoaxer E-Lie the Weasel was one such event.

As a teenager, E-Lie the Weasel allegedly served an 11 month stint in “zee concentration camps” — partly in Auschwitz and later in Buchenwald. We say allegedly because he never revealed his serial number tattoo and, in a documentary in which he appeared sleeveless, appeared not to have any tattoo on his arm at all (here). After the Americans liberated Buchenwald in April, 1945, E-Lie the Weasel, we are told, made his way to Paris where he learned French and studied literature, philosophy and psychology. By the time he was 19, he was working as a journalist, writing in French, while also teaching Hebrew. He wrote for Israeli and French newspapers.

The fraudster Wiesel claims he is shown in the “iconic” photo from Buchenwald — a claim that cannot possibly be verified.

In 1946, after learning of the Jewish terrorist group Irgun‘s deadly bombing of the King David Hotel, Wiesel aligned himself with the murderous anti-British and anti-Arab underground movement — translating propaganda articles from Hebrew to Yiddish for Irgun publications. Strangely enough, for a full decade after the war, Wiesel had never once written nor talked about the Holocaust TM. After a meeting with the well-known French author Francois Mauriac (a communist sympathizer) E-Lie the Weasel was persuaded to begin writing about his alleged experiences.

And that was the moment in time when a relatively obscure, pro-terrorist Zionist newspaper hack-journalist discovered his calling as a holohoaxer — part of an industry still in its infancy when E-Lie the Weasel began writing about it. He would go on to become a multi, and we do mean mean multi, millionaire — authoring 57 books, some of them hyped-up by Sulzberger’s Slimes and the likes of Oprah Winfrey. While pumping out his libelous literary trash, E-Lie the Weasel further enhanced his stupendous income by giving paid lecture after paid lecture after paid lecture. He was also awarded a professorship at Boston University. 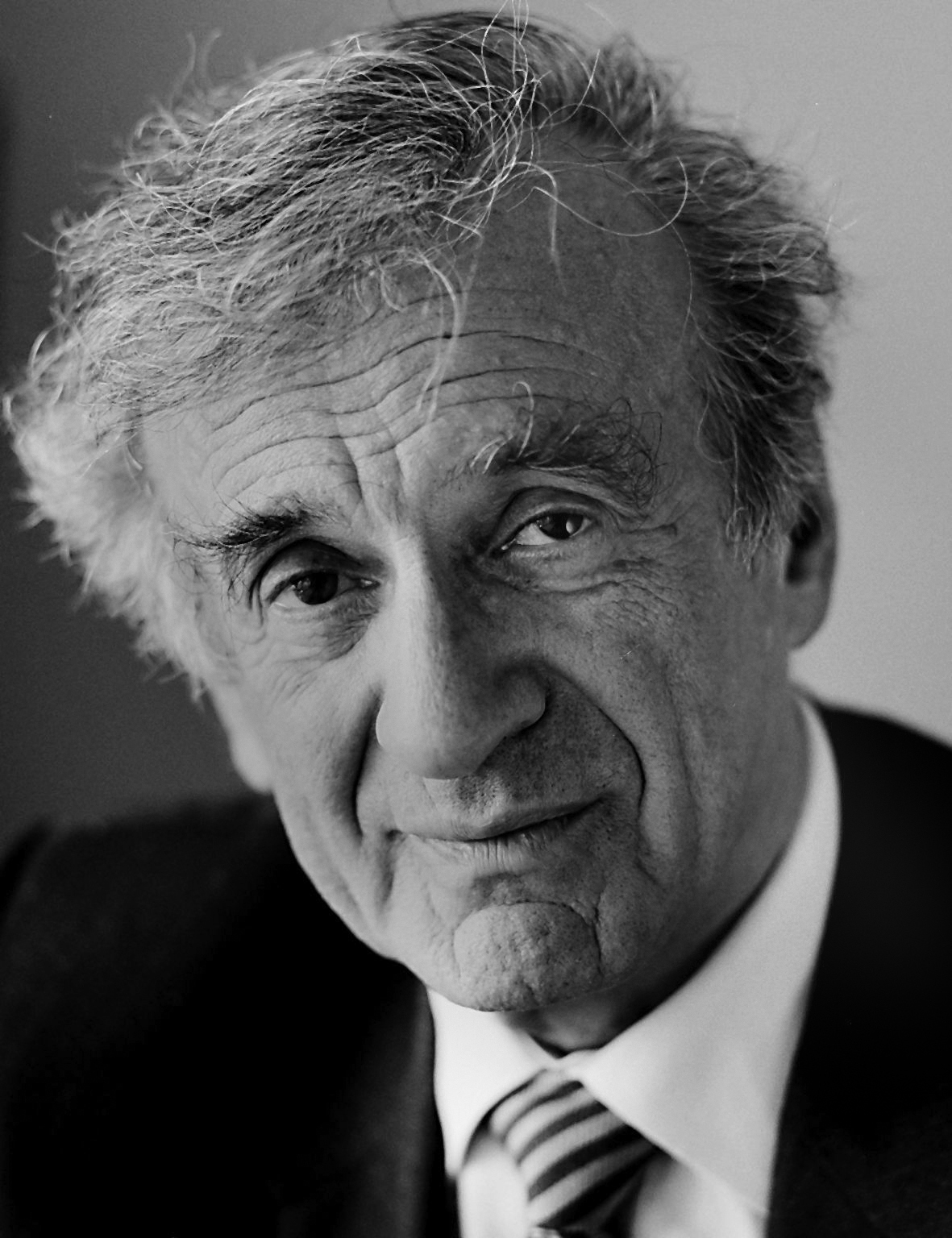 A full 10 years after the war had ended, Francois Mauriac, a pro-Jewish French Pinko, helped E-Lie the Weasel to start up a Holohoaxing business which ultimately manufactured 57 books — many of them hyped up by the Piranha Press. 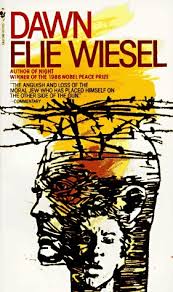 It hasn’t stopped raining cash on E-Lie the money-grubbing Weasel ever since.

The most notable of his works of Holohoaxery was Night — a bit of mendacious mush that sold moderately during the 60’s and 70’s, but got a HUGE boost when E-Lie the Weasel was awarded a Nobel Peace Prize in 1986 — which came with about a $350,000 cash prize during the 1980’s. Jewish-made Black billionairess Oprah Winfrey later put her fat ass and big mouth behind Night and hasn’t stopped pushing it since. Night (cha ching!) — followed by sequels titled Dawn (cha ching!), and Day (cha ching!), and Twilight (cha ching!) — was eventually translated into 30 languages with ten million copies sold in the United States alone. Ah, show us the shekels E-lie. Show us the shekels! Oprah the international marketing powerhouse pumped-up E-Lie the Weasel for 23 years. She once posted the following garbage about “babies in the fire” on her website:

“The horror of the camps was unreal. On his first night in Auschwitz, Elie saw German soldiers throwing Jewish babies into a fire, then pinched his face to be sure that he wasn’t dreaming. “For a long time,” he says, “I wondered, Did I see that? I sometimes doubt my own eyes. In the concentration camps, we discovered this whole universe where everyone had his place. The killer came to kill, and the victims came to die.” 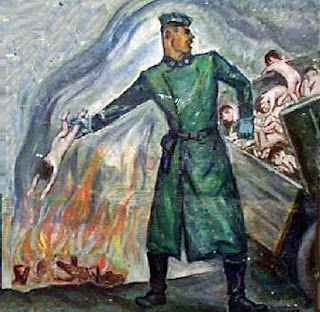 The following quote from Nobel Peace Prize winner Wiesel is directly from Night:

“Not far from us, flames were leaping up from a ditch, gigantic flames. They were burning something. A lorry drew up at the pit and delivered its load of little children. Babies! Around us, everyone was weeping. Someone began to recite the Kaddish. I do not know if it has ever happened before, in the long history of the Jews, that people have ever recited the prayer for the dead for themselves …. Never shall I forget that night, the first night in camp …. Never shall I forget that smoke. Never shall I forget the little faces of the children, whose bodies I saw turned into wreaths of smoke beneath a silent sky.” 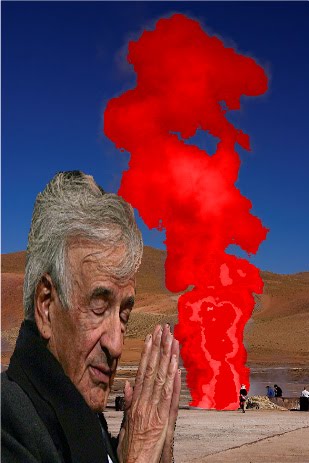 The following quote is directly from Against Silence:

“Later, I learned from a witness that for months after the massacre, the ground did not stop trembling and that from time to time, geysers of bloodspurted up out of the earth.”

One thing that cannot be said that E-Lie the Weasel is that he profited off of the mass murders of so many innocent people. That’s because, as regular readers of The Anti-New York Times all know, the “Holocaust” ™ was an invented fairy tale designed to tarnish the Germans and arouse sympathy for the Jews and Zionism. But the irony of E-Lie the Weasel’s pious and profitable fraud was that it aided and abetted, and continues to aid and abet, the real killing and the real suffering of millions of innocent people.

You see, public faith in, and public sympathy for, the “Holocaust” ™ is what allows Jewish gangsters and warmongers of every stripe to get away with Globalist/Marxist subversion, financial oppression, Hollywood demoralization and Zionist/neo-con genocide. Tribesmen like Soros, Satanyahu, Sulzberger, Greenspan, Bernanke, Redstone, Kagan, Kissinger and Kristol carry out the destruction; while sleazy scribblers like E-Lie the Weasel provide the protective cover in the form of misguided pity over one of the greatest hoaxes ever perpetrated in the history of mankind. And that is why E-Lie the Weasel has been so puffed-up by the Piranha Press.

If indeed there is a Hell for evil doers, let us hope that E-Lie the Weasel won’t be able to weasel his way out by playing the “Holocaust Card.” Boobus Americanus 1: I read a deeply touching piece in the New York Times about the passing of Elie Wiesel.

Boobus Americanus 2: We read his masterpiece ‘Night’ when I was in high school. His account of Jewish babies being thrown into the fire is some of the most harrowing literature of our times. (You know, Sugar, I wonder if it was E-Lie who suggested to George Bush 41 the lie about “Iraqis-pulling-Kuwaiti-babies-out-of-incubators-and-floor-slamming-them” from the 1990-91 Gulf War.)
My Comment:  Giant Hoax!  Financed by Zionist Banksters!
COMMENTS / FEEDBACK / INSULTS / KUDOS