Stalins’ Death Special I to V on Purim

The London Chronicle reported from someone very close to Stalin, who immediately defected to England upon Stalin’s death, that the leader had called Varushilev, the “Premier of the Soviet Union,” that night to give him a note upon which was written the decree that every Jew in the Soviet Union would be exiled to Birobijan, Russia, where they were to be murdered. Indeed, Stalin’s goal was to complete what Hitler had initiated. 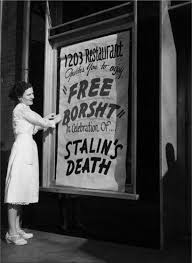 ED-NOTE – THE ARREST AND EXECUTION OF YAGODA (Did Stalin put him to death because of the Holodomor?)

In March 1937, Yagoda was arrested on Stalin’s orders. Yezhov announced Yagoda’s arrest for diamond smuggling, corruption, and working as a German agent since joining the party in 1917. Yezhov even blamed Yagoda of an attempt to assassinate him by sprinkling mercury around his office. He was accused of poisoning Maxim Gorky and his son. It was discovered that Yagoda’s two Moscow apartments and his dacha contained 3,904 pornographic photos, 11 pornographic films, 165 pornographically carved pipes, one dildo, and the two bullets that killed Zinoviev and Kamenev. Yezhov took over the apartments. He had spent four million rubles decorating his three homes, boasting that his garden had “2,000 orchids and roses.”

Yagoda was found guilty of treason and conspiracy against the Soviet government at the Trial of the Twenty-One in March 1938. He denied to be a spy, but admitted most other charges. Solzhenitsyn describes Yagoda as expecting clemency from Stalin after the show trial: “Just as though Stalin had been sitting right there in the hall, Yagoda confidently and insistently begged him directly for mercy: “I appeal to you! For you I built two great canals!” And a witness reports that at just that moment a match flared in the shadows behind a window on the second floor of the hall, apparently behind a muslin curtain, and, while it lasted, the outline of a pipe could be seen.

Yagoda was summarily shot soon after the trial. His wife Ida Averbakh was executed in 1938. In 1988, on the 50th anniversary of the trial, the Soviet authorities belatedly cleared all of the other 20 defendants of any criminal offence, admitting that the entire trial was built on false confessions. Yagoda was the only defendant not to be posthumously rehabilitated. 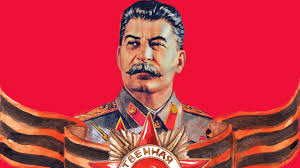 Stalin collapsed into his fatal coma on March 1, 1953 – the holiday of Purim – precisely as he was in the midst of planning to deport and/or annihilate 2-4 million Jews (…) Stalin’s associates, carefully tracking his twisted logic, realized that they themselves were next on his hit-list, and, with nothing to lose, poisoned the murderous dictator (…) In 1996, Dr. Rashin initiated the commemoration of a ‘Little Purim’ in honor of the deliverance of Russian Jewry from the hands of Stalin, and it has since been held in over 100 synagogues across the United States.

ED-NOTE – 65 years ago, on Purim, Josef Stalin was murdered. Stalin has become a household name for only negative reasons; Stalin and Communism, Stalin and dictatorship, Stalin and bloody butchery, Stalin and the Gulag have become synonymous. Trotsky and Lenine on the other hand have benefited from an über positive hasbara program which was denied to Stalin. And the real Bolshevik butchers, the Christian killers such as Zinoviev, Kaganovich, Yagoda to name just a few have gone completely under the radar. Their names are not taught in schools and the overwhelming majority of people have never heard of them… yet. And the question we need to ask is why? Why has the Jewish and criminal ideology of Lenine and Trotsky been attributed to Stalin? Why has Stalin been wrongly accused of the crimes committed by the Jewish Bolshevik (sorry for the pleonasm here)? What was it about Stalin that the Jews hated so much to the point that they have sullied his name, blurred his picture beyond recognition? What is it they do not want us to look at?

Today we would like to share some articles, all coming from Jewish sources, which will explain why Stalin has been so badly mistreated by Jewish controlled Academia and, with no surprise, the one theme that keeps coming back again and again is his deep hatred of the Jews. Yes,  yes, we know, he was married to 3 Jewish women, one of them was Kaganovich’s sister. We know. But how can one explain the unanimous reports about his deeply rooted anti-semitism? And no, it was not just ‘for show’.

NIKITA KHRUSHCHEV ON STALIN – “A hostile attitude toward the Jewish nation was a major shortcoming of Stalin’s. In his speeches and writings as a leader and theoretician there wasn’t even a hint of this. God forbid that anyone assert that a statement by him smacked of antisemitism. Outwardly everything looked correct and proper.

But in his inner circle, when he had occasion to speak about some Jewish person, he always used an emphatically distorted pronunciation. This was the way backward people lacking in political consciousness would express themselves in daily life—people with a contemptuous attitude toward Jews. They would deliberately mangle the Russian language, putting on a Jewish accent or imitating certain negative characteristics [attributed to Jews]. Stalin loved to do this, and it became one of his characteristic traits.”